To create an app run command through terminal :

and add geeks to INSTALLED_APPS list in settings.py. Now directory structure of the app will be, 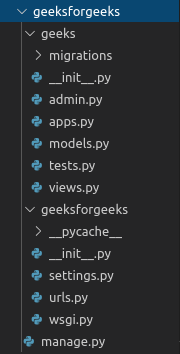 Now go to models.py in geeks app, Here we will create our first model. To create a model you need to first import the Model from django.db.models library.


According to Django documentation, A model is the single, definitive source of information about your data. It contains the essential fields and behaviours of the data you’re storing. Generally, each model maps to a single database table.

Django provides a number of predefined fields and methods to create a Model. To create a model you need to specify a model name first.

Enter the following code into models.py


The similar syntax would always be used to create a model.
After making any change in any of app’s models file you need to run following command from the terminal

After you run makemigrations and migrate a new table would have been created in database. You can check it from geeks -> makemigrations -> 0001_initial.py.


Let’s understand clearly what Makemigrations and Migrate do.

migrate executes those SQL commands in the database file. So after executing migrate all the tables of your installed apps are created in your database file.

You can confirm this by installing sqlite browser and opening db.sqlite3 you can see all the tables appears in the database file after executing migrate command. To check more about makemigrations visit Django manage.py migrate command | Python