Definition : Generating functions are used to represent sequences efficiently by coding the terms of a sequence as coefficients of powers of a variable (say)

in a formal power series.

Now with the formal definition done, we can take a minute to discuss why should we learn this concept.

This concept can be applied to solve many problems in mathematics. There is a huge chunk of mathematics dealing with just generating functions.

Before we start let’s go through some basic Combinatorics formula.

A generating function is a “formal” power series in the sense that we usually regard x as a placeholder rather than a number. Only in rare cases will we actually evaluate a generating function by letting x take a real number value, so we generally ignore the issue of convergence.

of real numbers is the infinite series:

Note: we’ll indicate the correspondence between a sequence and its generating function with a double-sided arrow.

Some Important sequences and their results…

Note that all the above series is infinite. There is one peculiar result of finite series which will be very handy so it’s recommended to remember these results to solve problems quickly.

Scaling:
Multiplying a generating function by a constant scales every term in the associated sequence by the same constant. 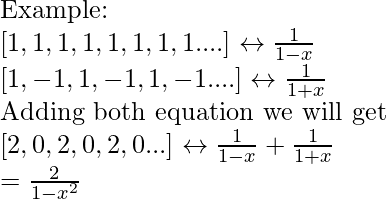 Differentiation:
In general, differentiating a generating function has two effects on the corresponding sequence: each term is multiplied by its index and the entire sequence is shifted left one place.

Example:
What sequence is represented by the following series :

From the perspective of GATE CS examination, problems from this topic are asked almost every year and the problems can easily be solved just by knowing the basics.