The animal kingdom is also called Animalia. Animalia is additionally arranged into Phyla, Class, Order, Family, and Genus in view of their fundamental and characteristic features. Human embryogenesis is the turn of events and arrangement of the human undeveloped organism (embryo).  The four stages of embryonic development are morula, blastula, gastrula, and organogenesis.

It is described by the cycles of cell division and cell separation of the incipient organism that happens during the beginning phases of improvement. In natural terms, the improvement of the human body involves development from a one-celled zygote to a grown-up person. Treatment happens when the sperm cell effectively enters and breakers with an egg cell (ovum). The hereditary material of the sperm and egg then, at that point, consolidates to shape a solitary cell called a zygote and the germinal progressive phase commences. Embryonic improvement in the human covers the initial two months of advancement; toward the start of the 10th week, the undeveloped organism is named a fetus. Human embryology is the investigation of this advancement during the initial two months after treatment. The typical time of incubation (pregnancy) is around nine months or 40 weeks.

The germinal stage alludes to the time from treatment through the advancement of the early undeveloped organism until implantation is finished in the uterus. The germinal stage takes around 10 days. During this stage, the zygote starts to partition, in a cycle called cleavage. A blastocyst is then framed and embedded in the uterus. Embryogenesis goes on with the following phase of gastrulation, when the three microbe layers of the incipient organism structure in a cycle called histogenesis, and the cycles of neurulation and organogenesis follow. In contrast with the undeveloped organism, the hatchling has more conspicuous outside highlights and a more complete arrangement of creating organs. The whole course of embryogenesis includes facilitated spatial and transient changes in gene expression, cell development, and cell separation. Depending upon the primary germ layers present in the blastula phase of life forms, they can be classified into two types; diploblastic and triploblastic.

Diploblasts are the animals in which the body wall creates from two embryonic germ layers- an inner layer (endoderm or mesendoderm) and an outer layer (ectoderm). They have a nonliving middle layer between the endoderm and ectoderm. Diploblastic animals do not have a mesodermal layer. Ectoderm gives rise to epidermis, nervous tissue, and nephridia.

Triploblasts are animals having three embryonic germ layers, an inner layer (endoderm), an outer layer (ectoderm), and a middle layer (mesoderm). The ectoderm forms the brain, spinal cord, lens of the eye, and hairs. Mesoderm is responsible for the formation of notochord, bone, muscles, connective tissues, and circulatory systems and endoderm leads to the formation of the stomach, liver, colon, urinary bladder, and lungs.

These are further divided based on opening through the blastopore. 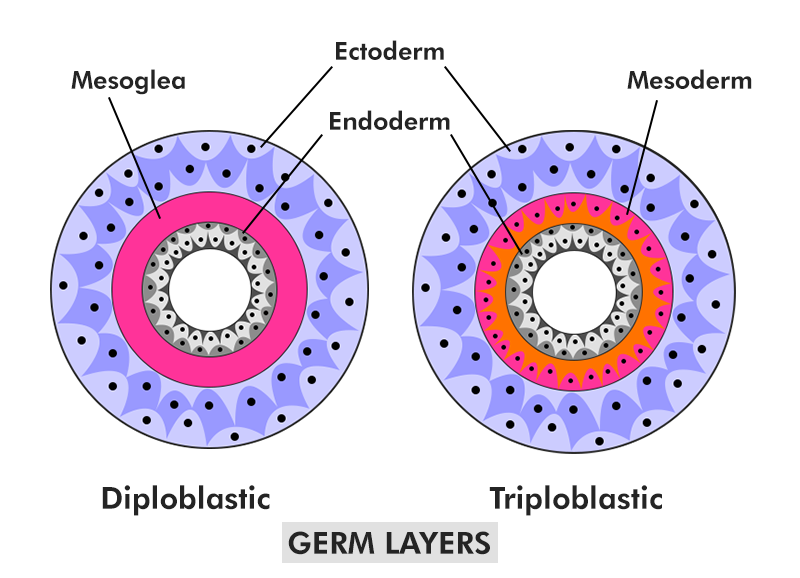 Triploblasts develop an internal body cavity called a coelom. This epithelial cell-lined coelomic cavity is typically loaded up with liquid or fluid and lies between the instinctive organs and the body wall. It houses numerous organs like the stomach-related, urinary, and regenerative frameworks, the heart and lungs, and furthermore contains the significant conduits and veins of the circulatory framework. In vertebrates, the body cavity is partitioned into the thoracic pit, which houses the heart and lungs, and the stomach pit, which houses the stomach-related organs. In the thoracic hole, another region creates the pleural depression, which gives space to the lungs to grow during breathing, and the pericardial pit, which gives space for the development of the heart.

Triploblasts that don’t foster a coelom are called acoelomates, and their mesoderm locale is totally loaded up with tissue, in spite of the fact that they really do in any case have a stomach cavity. Instances of acoelomates remember creatures for the phylum Platyhelminthes, otherwise called flatworms. Creatures with a genuine coelom are called eucoelomates (or coelomates). In such cases, a genuine coelom emerges completely inside the mesoderm microbe layer and is lined by an epithelial film. This film additionally lines the organs inside the coelom, associating and standing firm on them in footing while at the same time permitting them some opportunity for development.

Question 1:What are the primary germ layers present in the blastula stage of organisms?

The primary germ layers present in the blastula stage are an inner layer (Endoderm), an outer layer (Ectoderm), and the Middle layer (Mesoderm).

Question 2: Why are triploblastic animals more complex than diploblastic?

Question 3: What are Diploblastic animals?

Diploblastic animals are organisms which are having two embryonic germ layers, an inner layer (endoderm or mesendoderm) and an outer layer (ectoderm).

Question 4: What are Triploblastic animals?

During embryogenesis, diploblastic develops two embryonic germ layers: ectoderm and endoderm or mesendoderm. Triploblasts develop a third layer mesoderm which arises from mesendoderm and resides between the endoderm and ectoderm.

Question 6: What is the key difference between diploblastic and triploblastic?