In the early 80s PCs became more popular and easily accessible to the general population, this also led to the increased use of computers in all fields and criminal activities were no exception to this. As more and more computer-related crimes began to surface like computer frauds, software cracking, etc. the computer forensics discipline emerged along with it. Today digital evidence collection is used in the investigation of a wide variety of crimes such as fraud, espionage, cyberstalking, etc. The knowledge of forensic experts and techniques are used to explain the contemporaneous state of the digital artifacts from the seized evidence such as computer systems, storage devices (like SSDs, hard disks, CD-ROM, USB flash drives, etc.), or electronic documents such as emails, images, documents, chat logs, phone logs, etc.

The main processes involved in digital evidence collection are given below: 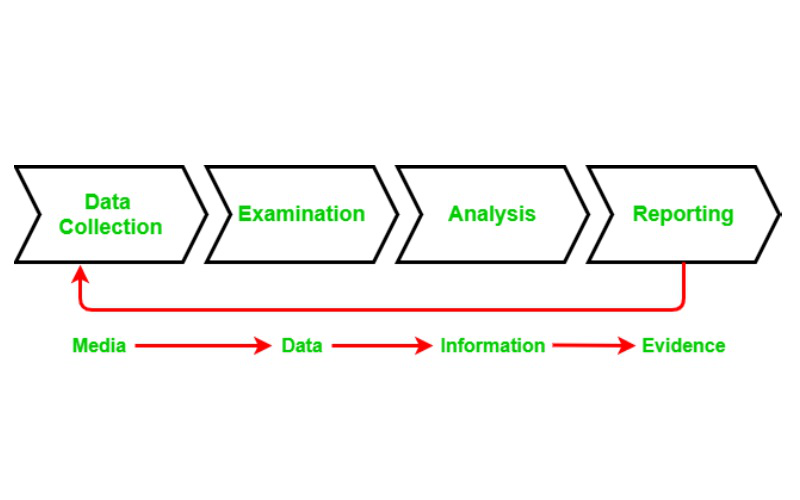 The computer investigator and experts who investigate the seized devices have to understand what kind of potential shreds of evidence could there be and what type of shreds of evidence they are looking for. So, that they could structure their search pattern. Crimes and criminal activities that involve computers can range across a wide spectrum; they could go from trading illegal things such as rare and endangered animals, damaging intellectual property, to personal data theft, etc.

The investigator must pick the suitable tools to use during the analysis. Investigators can encounter several problems while investigating the case such as files may have been deleted from the computer, they could be damaged or may even be encrypted, So the investigator should be familiar with a variety of tools, methods, and also the software to prevent the data from damaging during the data recovery process.

There are two types of data, that can be collected in a computer forensics investigation:

Collecting the shreds of evidence is really important in any investigation to support the claims in court. Below are some major types of evidence.