In this article, we will discuss all the differences between nth-child() and nth-of-type() selectors in jQuery.

nth-child() Selector: This selector is used to match the elements based on their position in a group of siblings. It matches every element that is the nth-child, regardless of the type, of its parent.

Example: This example describes the uses of nth-child() Selector. 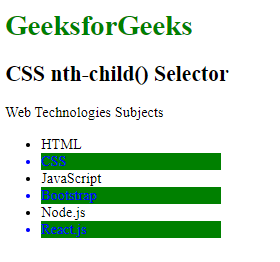 nth-of-type() Selector: This Selector is used to style only those elements which are the nth number of children of its parent element. Any n may be a number, a keyword, or a formula.children

Example: This example describes the uses of nth-of-type() Selector. 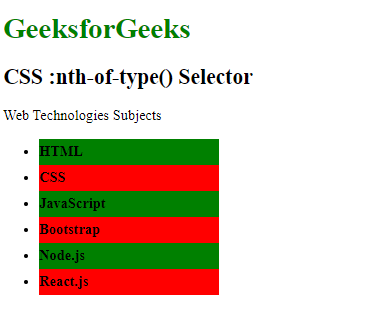 Difference between the nth-child() and nth-of-type() selectors:

Previous
What are angular Material Icons ?
Next
Spring with Castor Example
Related Articles
1. jQuery | Selectors and Event Methods
2. JQuery | Multiple ID selectors
3. Selectors in jQuery
4. How to use JavaScript variables in jQuery selectors ?
5. What are the fastest/slowest selectors in jQuery ?
6. How jQuery Selectors are Executed ?
7. How to use OR Operation in jQuery Attribute Selectors ?
8. jQuery Selectors Complete Reference
9. Difference between jquery.size() and jquery.length
10. How ajax works? Difference between angular js and jquery
Article Contributed By :