Difference Between Gravitation and Gravity

Gravity, on the other hand, is the force that exists between an object and the very large object known as the earth. Gravitation is also defined as a force that is proportional to the product of the masses of both objects. Furthermore, it is inversely proportional to the square of their distance. Gravity is commonly thought of as a natural attribute of the earth, owing to which objects are drawn to it. We’ll look at various facts and the distinction between gravitation and gravity in this article. 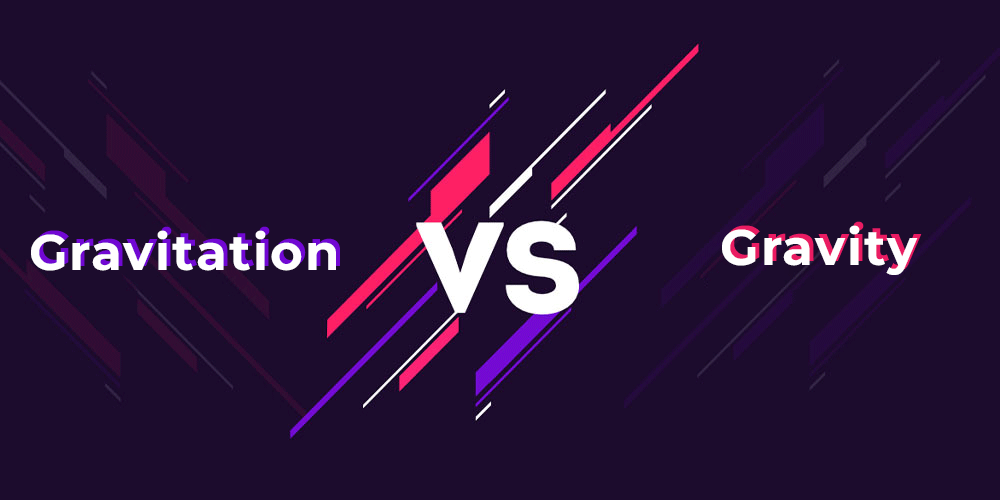 As a result, we can define gravity as a force that pulls a body toward the earth’s core. Gravity is a well-known phenomenon and plays an important role in the survival of life on Earth. The atmosphere of our planet is maintained by the gravitational pull between the Earth and the Sun. As a result, it is the reason for the air that humans need to breathe in order to survive. Not only that, but keep away from the sun too close.

Derivation of the formula for Gravity:

The earth exerts a gravitational pull towards itself, which attracts an item to it. Other objects, like the Moon, are dragged towards it by a force (F) that is directly proportional to the mass (M) of the object, i.e.

The constant value of g is 9.8 m/s2, which is rounded off to 10 m/s2 for convenience of calculation. The value of g is not the same everywhere across the world.

The force of attraction between any two objects in the universe is called gravitation. Everything in our universe attracts something else with some force. However, due to the weak nature of this force, it is often difficult for us to detect. Its weak property is mainly due to the large separation distance.

However, the range of gravity is considered to be infinite. Sir Isaac Newton, a famous physicist, was the first to notice this. In 1680, he published his fundamental law of gravitation, Newton’s law. In fact, gravity is caused by the attraction of objects toward the earth.

Derivation of the formula for Gravitation:

where F is the gravitational attraction force between two bodies. The masses of the two bodies are m1 and m2, and the distance between their center points is r2. A constant must be increased once more to equate F to the right-hand side.

The universal constant, G, has a value of 6.67 × 10-11 Nm2/Kg2. The gravitational attraction between two objects that are very far apart is very weak, as seen by the minuscule value. The gravitational force has the same value everywhere in the universe.

Difference between Gravity and Gravitation

Problem 1: Is Gravitation a Repelling or Attractive Force?

Problem 2: Why do we feel lighter on the equator than we do at the North Pole?

It’s because, in the equator, there’s more centrifugal force to counteract gravity’s effect. As a result, the equator has a lower overall weight than the poles.

Problem 3: What are the methods used by spaceships to create artificial gravity?

Problem 4: If the mass of the object is 10 Kg then what is the weight (in N) of an object?

Problem 5: The gravitational force acts in proportion to the mass of all objects. So why does a heavy object fall slower than a light object?

When a heavy object falls, gravity’s acceleration ‘g’ takes effect, which is independent of the body’s mass.

Therefore, F and g, are not the same.

The formula determines the magnitude of the gravitational force between the earth and an object.