Beer’s law and Lambert’s law are frequently used in combination with the Beer-Lambert law because they can show the connection between absorbance and both the path length of light inside the sample and the sample concentration. 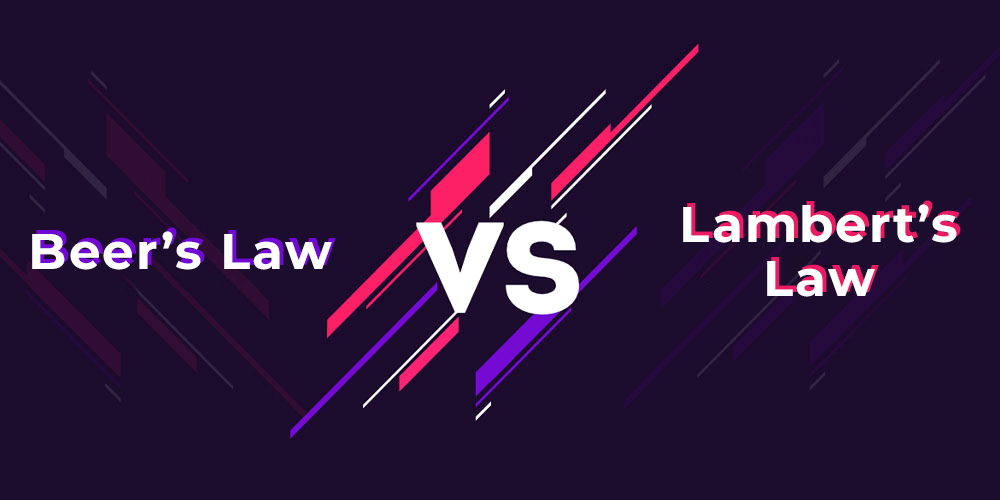 What is Beer’s Law?

According to Beer’s law, the quantity of light absorbed is directly proportional to the solution concentration. This equation is related to the weakening of light to the material properties.

Apart from this, it states that the absorbance of a solution is directly proportional to solvent concentration. Hence, we can utilize this correlation to identify the concentration of a taken sample solution by utilizing a spectrophotometer or colorimeter. Usually, this correlation is helpful in UV-visible absorption spectroscopy. But, this law is valid only for high concentration solutions.

Because so many people were involved in making this law/statement, it’s also known as the Beer-Lambert law, Lambert-Beer law, and Beer-Lambert-Bouguer law. In other words, Beer’s law incorporates several laws proposed by numerous scientists. The following is the equation:

What is Lambert’s Law?

Lambert’s law suggests that a sample’s absorbance is proportional to the path length of light passing through it. This law is frequently used in combination with Beer’s law, resulting in the Beer-Lambert law.

This is because, in addition to these separate rules, the Beer-Lambert law is very useful in spectroscopic analysis. Johann Heinrich Lambert was the first to propose Lambert’s law.

Problem 1: A student has a sample of Thymine with an absorbance of 0.56 at a wavelength of 360 nm. The Molar absorption coefficient (ε360) is 4250 M−1cm−1. The path length of light is 3 cm. What is the concentration of the sample?

Problem 2: A scientist has a sample of Cytosine with the molar absorption coefficient of sample at 260 nm is 6000 M−1cm−1. The path length of light is 3.00 cm, then find the absorbance if the concentration of the sample solution is 3.5×10-5M

Therefore, the absorbance is calculated as 0.63.

Problem 3: A researcher has a sample of Sodium chloride with the Molar absorption coefficient at 245 nm is 3000 M−1cm−1 then find the path length if the absorbance is 0.34 and sample concentration is 6×10-4M

Therefore, the absorbance is calculated as 0.18 cm.

Problem 4: If the concentration of the sample (5 g/liter). The cuvette length is 4 cm and  75% of the beam of light is transmitted. What is the molar absorption coefficient?