Have you noticed how many of the insulators are made of wood, plastic, or glass? But why is that? When we utilise wood or plastic, why don’t we receive electric shocks? Why do you only get severe shocks from metal wires? We’ll look at dielectrics, polarisation, the dielectric constant, and more in this chapter. We’ll look at some typical applications and examples of these dielectrics as well.

What is a Dielectric?

Non-conducting materials are known as dielectrics. They are insulating materials and poor electric current conductors. Dielectric materials can maintain an electrostatic charge while losing very little energy as heat. Mica, plastics, glass, porcelain, and other metal oxides are examples of dielectrics. It’s also important to note that even dry air is dielectric. 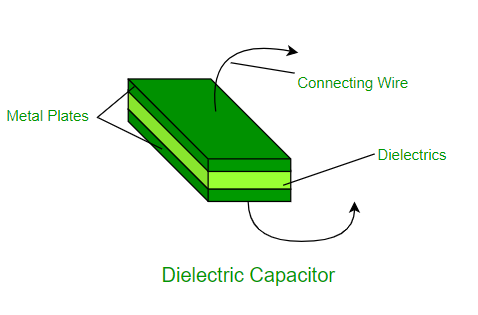 Dielectrics are of two types:

When an external electric field is applied to a non-polar molecule, all protons move in the same direction as the electric field, while electrons move in the opposite direction. This process will continue unless the internal pressures are balanced due to the existence of an electric field. This results in the formation of two charge centres. We name them the Induced Electric Dipole because they are polarised. The Induced Electric Dipole Moment is the dipole moment.

When the matter is exposed to an electric field, it has a propensity to develop an electric dipole moment that is proportional to the applied field. Because matter is made up of fundamental particles with an electric charge, such as protons and electrons, it is a property of all matter.

Negatively charged electrons and positively charged atomic nuclei are subjected to opposing forces and undergo charge separation when exposed to an electric field. The dielectric constant and, at high (optical) frequencies, the refractive index of a material is determined by its polarizability.

It also gives information about a molecule’s interior structure. Polarizability is a solid is defined as the dipole moment per unit volume of the crystal cell:

where α is the atomic polarizability & E is the electric field.

Its S.I. unit is m3 and its dimensions are the same as its volume.

When a dielectric slab is placed in an electric field, the molecule acquires a dipole moment. In such circumstances, the dielectric is said to be polarised. The Electric Polarization of a dielectric substance is the dipole moment per unit volume. P is the symbol for polarisation. 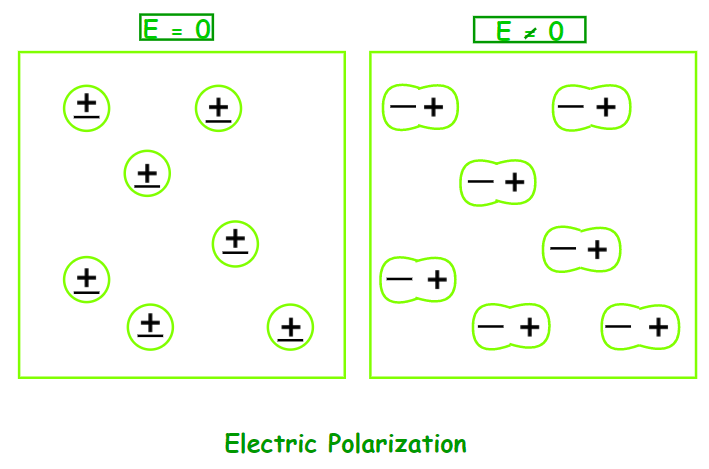 The Dielectric Constant is the ratio of the applied electric field strength to the strength of the decreased value of the electric field capacitor when a dielectric slab is placed between the parallel plates. The formula is as follows:

where E0 is the applied electric field, E is the net field, & εr is the dielectric constant.

The dielectric strength of insulating material is the highest electric field strength that it can tolerate intrinsically without losing its insulating characteristics.

The formula for polarization is given as:

where P is the polarization, χe is the susceptibility, & E is the electric field.

Question 1: Electric field inside the capacitor is 50 V/m and the dielectric constant = 4.5. What is polarization?

Question 2: What is dielectric polarization?

When a current interacts with a dielectric (insulating) substance, the dielectric material shifts its charge distribution, with positive charges aligning with the electric field and negative charges aligning with the electric field. Important circuit components like capacitors may be manufactured by taking use of this reaction.

Question 4: Explain insulators and their properties?

Insulators are materials that make it difficult for electric charges to flow freely. The outer shell electrons are firmly linked to the nucleus in the atoms of such substances. These chemicals have a high impedance to the passage of electricity because they lack free charge carriers. Glass, diamond, porcelain, plastic, nylon, wood, mica, and other non-metals are all insulators.

Question 5: What are dielectric materials?

Dielectric materials are insulating materials that are poor conductors of electric current. When a dielectric is put in an electric field, it shows an electric dipole, which means that positive and negative electrically charged entities are separated on a molecular or atomic level. Capacitors, power lines and electric insulation switch bases, and light receptacles all employ them.