Write a function detectAndRemoveLoop() that checks whether a given Linked List contains a loop and if the loop is present then removes the loop and returns true. If the list doesn’t contain a loop then it returns false. The below diagram shows a linked list with a loop. detectAndRemoveLoop() must change the below list to 1->2->3->4->5->NULL.

We also recommend reading the following post as a prerequisite to the solution discussed here.
Write a C function to detect a loop in a linked list
Before trying to remove the loop, we must detect it. Techniques discussed in the above post can be used to detect loops. To remove the loop, all we need to do is to get a pointer to the last node of the loop. For example, a node with value 5 in the above diagram. Once we have a pointer to the last node, we can make the next of this node NULL and the loop is gone.
We can easily use Hashing or Visited node techniques (discussed in the above-mentioned post) to get the pointer to the last node. The idea is simple: the very first node whose next is already visited (or hashed) is the last node.
We can also use the Floyd Cycle Detection algorithm to detect and remove the loop. In Floyd’s algo, the slow and fast pointers meet at a loop node. We can use this loop node to remove the cycle. There are following two different ways of removing the loop when Floyd’s algorithm is used for loop detection.

Method 1 (Check one by one) We know that Floyd’s Cycle detection algorithm terminates when fast and slow pointers meet at a common point. We also know that this common point is one of the loop nodes (2 or 3 or 4 or 5 in the above diagram). Store the address of this in a pointer variable say ptr2. After that start from the head of the Linked List and check for nodes one by one if they are reachable from ptr2. Whenever we find a node that is reachable, we know that this node is the starting node of the loop in the Linked List and we can get the pointer to the previous of this node.

Thanks to WgpShashank for suggesting this method.
Below image is a dry run of the ‘remove loop’ function in the code : 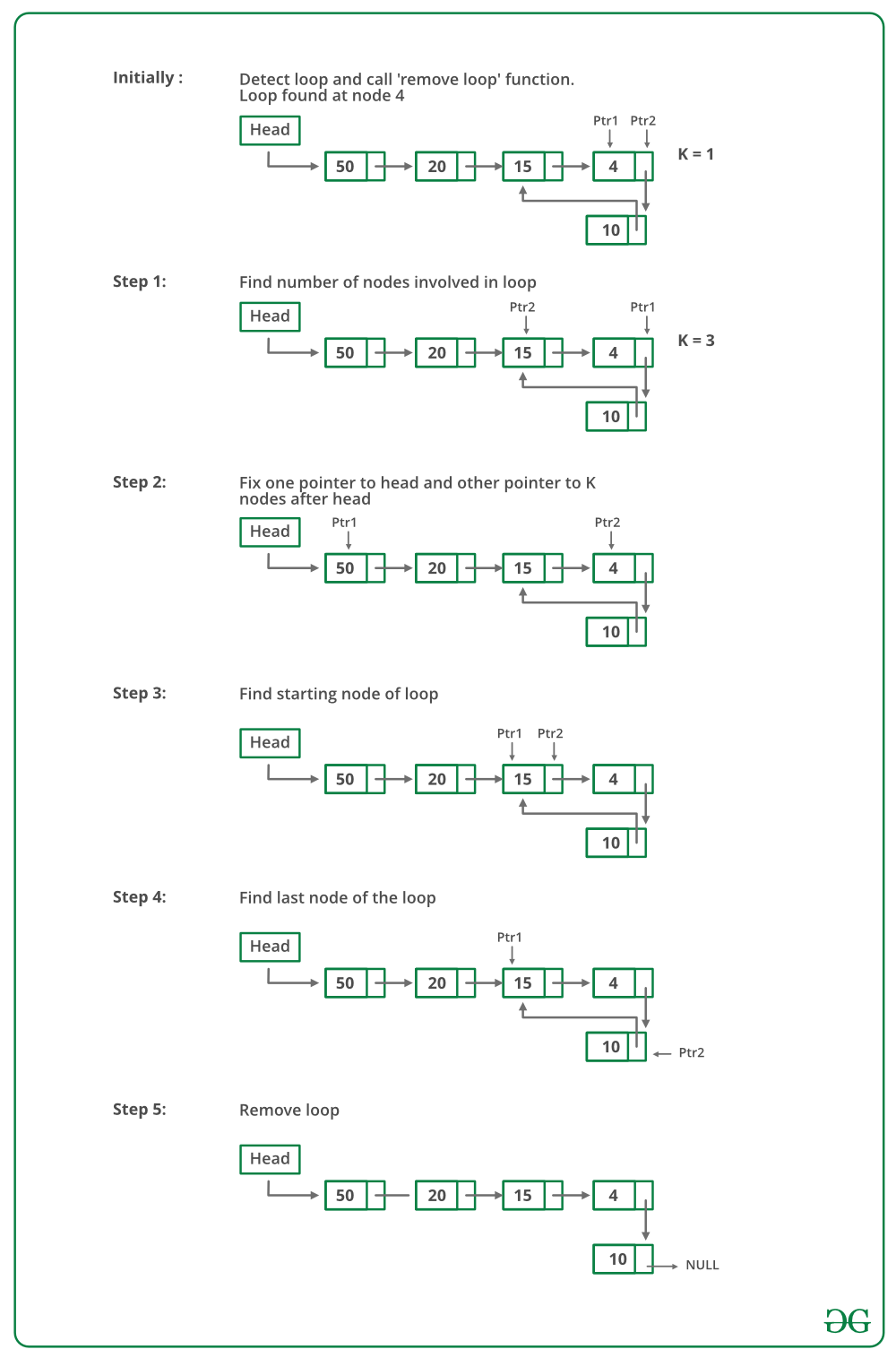 Method 3 (Optimized Method 2: Without Counting Nodes in Loop)
We do not need to count the number of nodes in Loop. After detecting the loop, if we start the slow pointer from the head and move both slow and fast pointers at the same speed until fast don’t meet, they would meet at the beginning of the loop.

How does this work?
Let slow and fast meet at some point after Floyd’s Cycle finding algorithm. The below diagram shows the situation when the cycle is found.

Situation when cycle is found

We can conclude below from the above diagram

From the above equation, we can conclude below

So if we start moving both pointers again at same speed such that one pointer (say slow) begins from head node of linked list and other pointer (say fast) begins from meeting point. When the slow pointer reaches the beginning of the loop (has made m steps), the fast pointer would have made also moved m steps as they are now moving at the same pace. Since m+k is a multiple of n and fast starts from k, they would meet at the beginning. Can they meet before also? No because slow pointer enters the cycle first time after m steps.

We Thank Shubham Agrawal for suggesting this solution.

Thanks to Gaurav Ahirwar for suggesting the above solution.

Please write comments if you find the above codes/algorithms incorrect, or find other ways to solve the same problem.