In this article, you’ll learn how to deploy a Chatbot using Tensorflow. A Chatbot is basically a bot (a program) that talks and responds to various questions just like a human would. We’ll be using a number of Python modules to do this.

This article is divided into two sections:

First, we’ll train the Chatbot model, and then in section two, we’ll learn how to make it work and respond to various inputs by the user.

The first thing we’re going to do is to train the Chatbot model. In order to do that, create a file named ‘intense.json’ in which we’ll write all the intents, tags and words or phrases our Chatbot would be responding to.

Here we’ve added just three tags just to show how it works. You can add a lot of them!


Step 3: Now we need to classify our data into 0’s and 1’s because neural networks works with numerical values, not strings or anything else.


Step 4: We’ve come to the model-building part of our Chatbot model. Here, we’re going to deploy a Sequential model, that we’ll train on the dataset we prepared above. 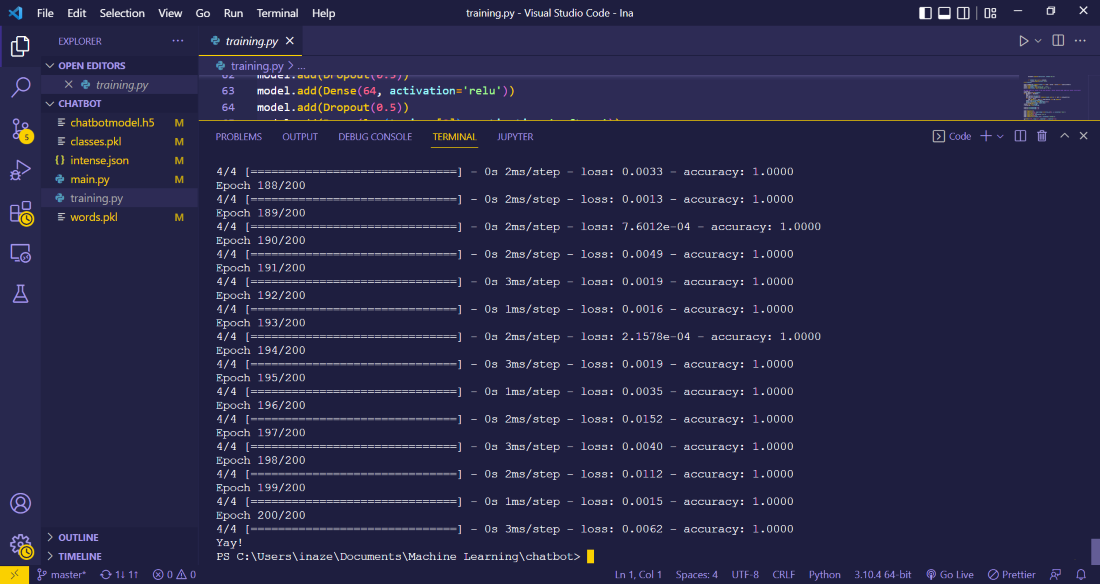 Creating a main.py to run the Chatbot

We’re done training the model, now we need to create the main file that will make the Chatbot model work and respond to our inputs.

Step 1: To get started, import the following modules.

clean_up_sentences(sentence) – This function will separate words from the sentences we’ll give as input.


bagw(sentence): This function will append 1 to a list variable ‘bag’ if the word is contained inside our input and is also present in the list of words created earlier.


predict_class(sentence): This function will predict the class of the sentence input by the user.


get_response(intents_list, intents_json): This function will print a random response from whichever class the sentence/words input by the user belongs to.


Step 4: Finally, we’ll initialize an infinite while loop that will prompt the user for an input and print the Chatbot’s response.


main.py is as follows: