Debugging in Python with Pdb

The PDB module in Python gives us gigantic highlights for compelling debugging of Python code. This incorporates:

This module is already installed with installing of python. So, we only need to import it into our code to use its functionality. Before that we must know some concepts which are mentioned below:

Let’s begin with a simple example consisting of some lines of code.

Here, we can see that when the function call is done then pdb executes and ask for the next command. We can use some commands here like

n -> step to next line within the same function

To know more about different commands you can type help and get the required information.

Now, we will execute our program further with the help of the n command.

In a similar way, we can use the breakpoint() method (which doesn’t need to import pdb).

When utilizing the print order p, you’re passing an articulation to be assessed by Python. On the off chance that you pass a variable name, pdb prints its present worth. Notwithstanding, you can do considerably more to examine the condition of your running application.

An application of PDB debugging in the recursion to check variables

In this example, we will define a recursive function with pdb trace and check the values of variables at each recursive call. To the print the value of variable, we will use a simple print keyword with the variable name. 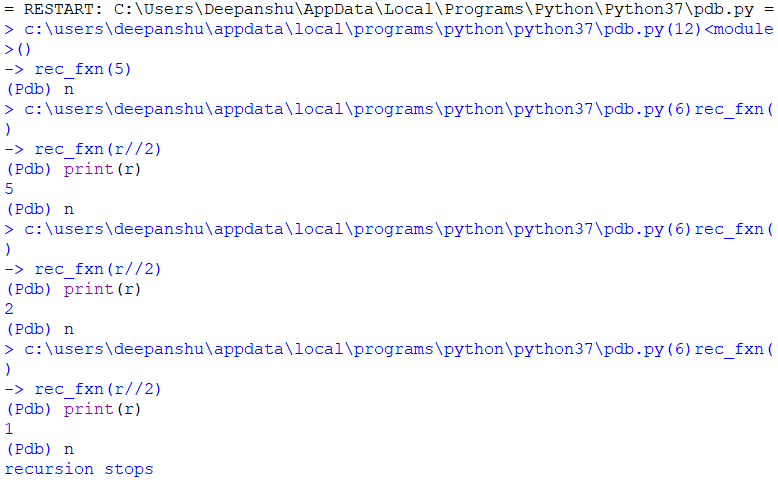 An Example to check expressions

This example is similar to the above example, that prints the values of expressions after their evaluation.

2. Moving in code by steps

This is the most important feature provided by pdb. The two main commands are used for this which are given below:

n -> step to next line within the same function

Let’s understand the working of these with the help of an example. 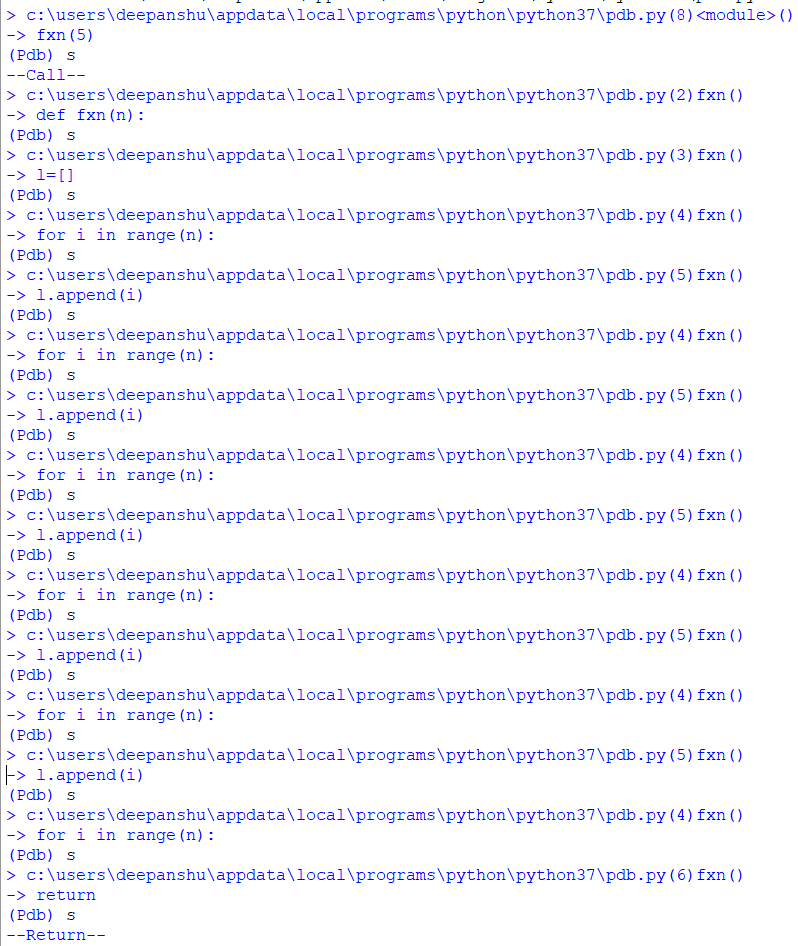 This feature helps us to create breakpoints dynamically at a particular line in the source code. Here, in this example, we are creating breakpoint using command b which given below:

With a line number argument, set a break at this line in the current file.  With a function name, set a break at the first executable line of that function.  If a second argument is present, it is a string specifying an expression that must evaluate to true before the breakpoint is honored.

The line number may be prefixed with a filename and a colon, to specify a breakpoint in another file (probably one that hasn’t been loaded yet).  The file is searched for on sys.path; the .py suffix may be omitted.

4. Execute code until the specified line

Use unt to proceed with execution like c, however, stop at the following line more noteworthy than the current line. Now and then unt is more helpful and faster to utilize and is actually what you need. 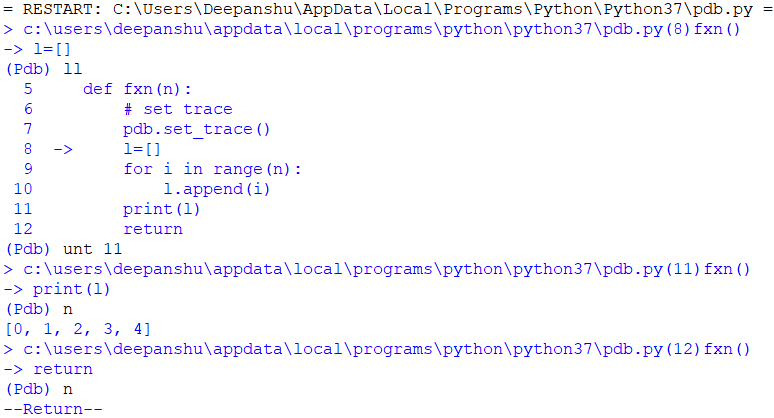 Listing Source code is another feature that can be used to track the code with a line number as a list. For this ll command is used.

longlist | ll -> List the whole source code for the current function or frame.

Let’s understand the working of longlist with the help of an example. 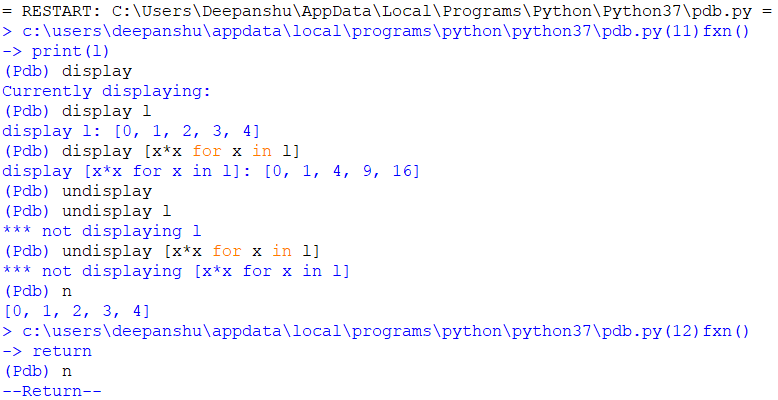 Here, we can play with each trace as a frame, and we can also move from one frame to another.

Print a stack trace, with the most recent frame at the bottom. An arrow indicates the “current frame”, which determines the context of most commands.  ‘bt’ is an alias for this command.

Move the current frame count (default one) levels up in the stack trace (to an older frame).

Move the current frame count (default one) levels down in the stack trace (to a newer frame). 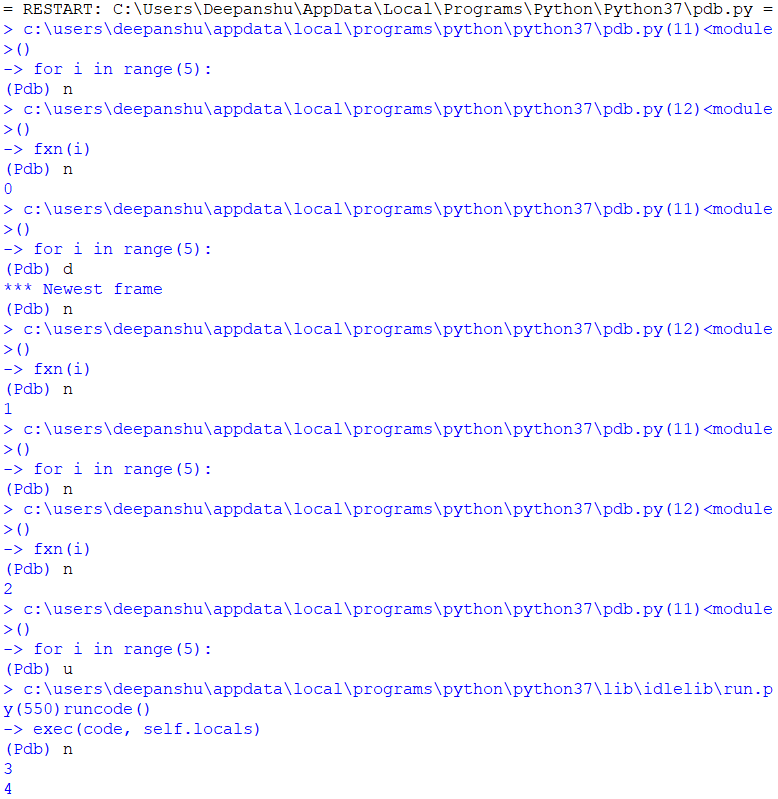