System design is one of the most important rounds of interviews for software engineers in big tech companies. There are a lot of concepts an engineer should be aware of and database sharding is one of them. Whenever any application starts receiving a huge amount of concurrent requests and it sees significant growth of the users on the website it eventually needs to scale to handle the increasing amount of data or traffic on the website. It’s difficult to predict the growth of the website in the future, and we can’t predict how long a website will maintain its popularity and growth. So we need to scale our database dynamically and database sharding is the technique that can fulfill this job. Let’s understand this concept in detail.

What is Sharding or Data Partitioning?

Take the example of Pizza (yes!!! your favorite food). You get the pizza in different slices and you share these slices with your friends. Sharding which is also known as data partitioning works on the same concept of sharing the Pizza slices. It is basically a database architecture pattern in which we split a large dataset into smaller chunks (logical shards) and we store/distribute these chunks in different machines/database nodes (physical shards). Each chunk/partition is known as a “shard” and each shard has the same database schema as the original database. We distribute the data in such a way that each row appears in exactly one shard. It’s a good mechanism to improve the scalability of an application. 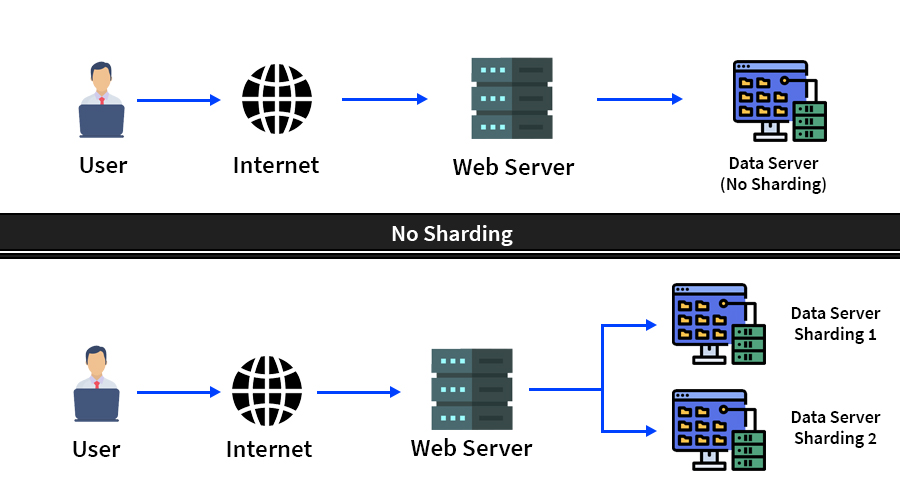 Database shards are autonomous; they don’t share any of the same data or computing resources. In some cases, though, it may make sense to replicate certain tables into each shard to serve as reference tables.

This technique is also known as hash-based sharding. Here, we take the value of an entity such as customer ID, customer email, IP address of a client, zip code, etc and we use this value as an input of the hash function. This process generates a hash value which is used to determine which shard we need to use to store the data. We need to keep in mind that the values entered into the hash function should all come from the same column (shard key) just to ensure that data is placed in the correct order and in a consistent manner. Basically, shard keys act like a primary key or a unique identifier for individual rows.

Consider an example that you have 3 database servers and each request has an application id which is incremented by 1 every time a new application is registered. To determine which server data should be placed on, we perform a modulo operation on these applications id with the number 3. Then the remainder is used to identify the server to store our data. 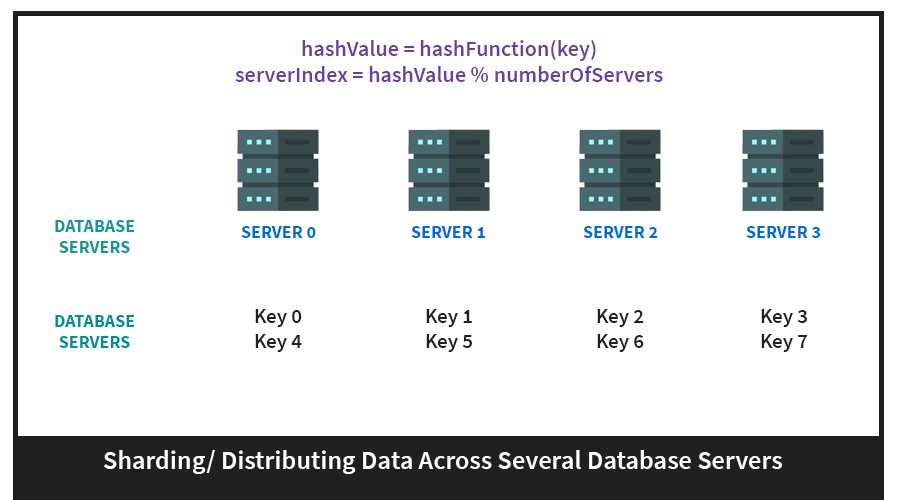 The downside of this method is elastic load balancing which means if you will try to add or remove the database servers dynamically it will be a difficult and expensive process. For example, in the above one if you will add 5 more servers then you need to add more corresponding hash values for the additional entries. Also, the majority of the existing keys need to be remapped to their new, correct hash value and then migrated to a new server. The hash function needs to be changed from modulo 3 to modulo 8. While the migration of data is in effect both the new and old hash functions won’t be valid. During the migration, your application won’t be able to service a large number of requests and you’ll experience downtime for your application till the migration completes.

Note: A shard shouldn’t contain values that might change over time. It should be always static otherwise it will slow down the performance.

2. Horizontal or Range Based Sharding

In this method, we split the data based on the ranges of a given value inherent in each entity. Let’s say you have a database of your online customers’ names and email information. You can split this information into two shards. In one shard you can keep the info of customers whose first name starts with A-P and in another shard, keep the information of the rest of the customers. 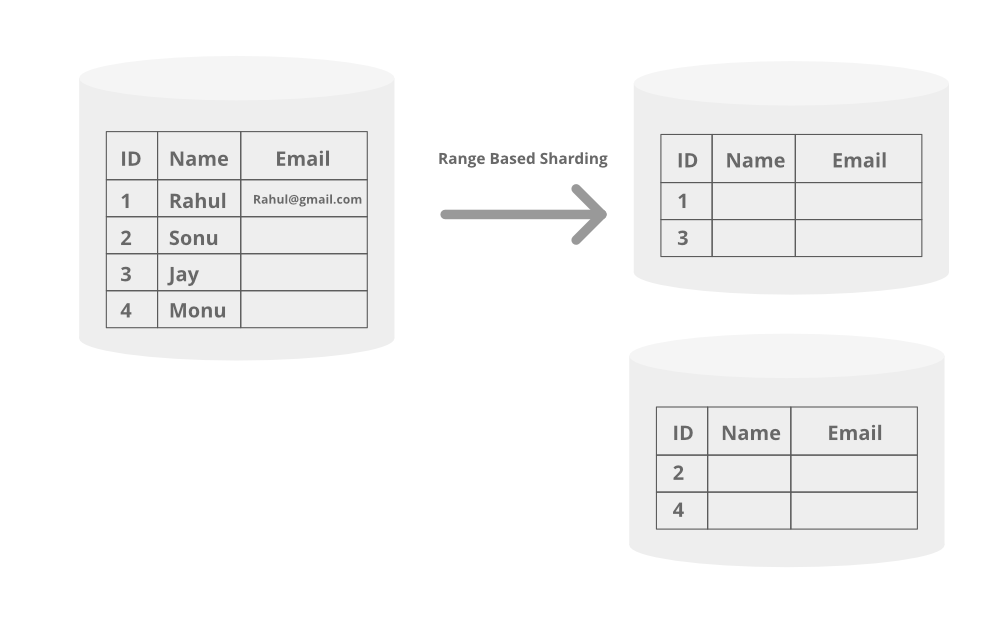 Range-based sharding is the simplest sharding method to implement. Every shard holds a different set of data but they all have the same schema as the original database. In this method, you just need to identify in which range your data falls, and then you can store the entry to the corresponding shard. This method is best suitable for storing non-static data (example: storing the contact info for students in a college.)

The drawback of this method is that the data may not be evenly distributed on shards. In the above example, you might have a lot of customers whose names fall into the category of A-P. In such cases, the first shard will have to take more load than the second one and it can become a system bottleneck.

In this method, we split the entire column from the table and we put those columns into new distinct tables. Data is totally independent of one partition to the other ones. Also, each partition holds both distinct rows and columns. Take the example of Twitter features. We can split different features of an entity in different shards on different machines. On Twitter users might have a profile, number of followers, and some tweets posted by his/her own. We can place the user profiles on one shard, followers in the second shard, and tweets on a third shard. 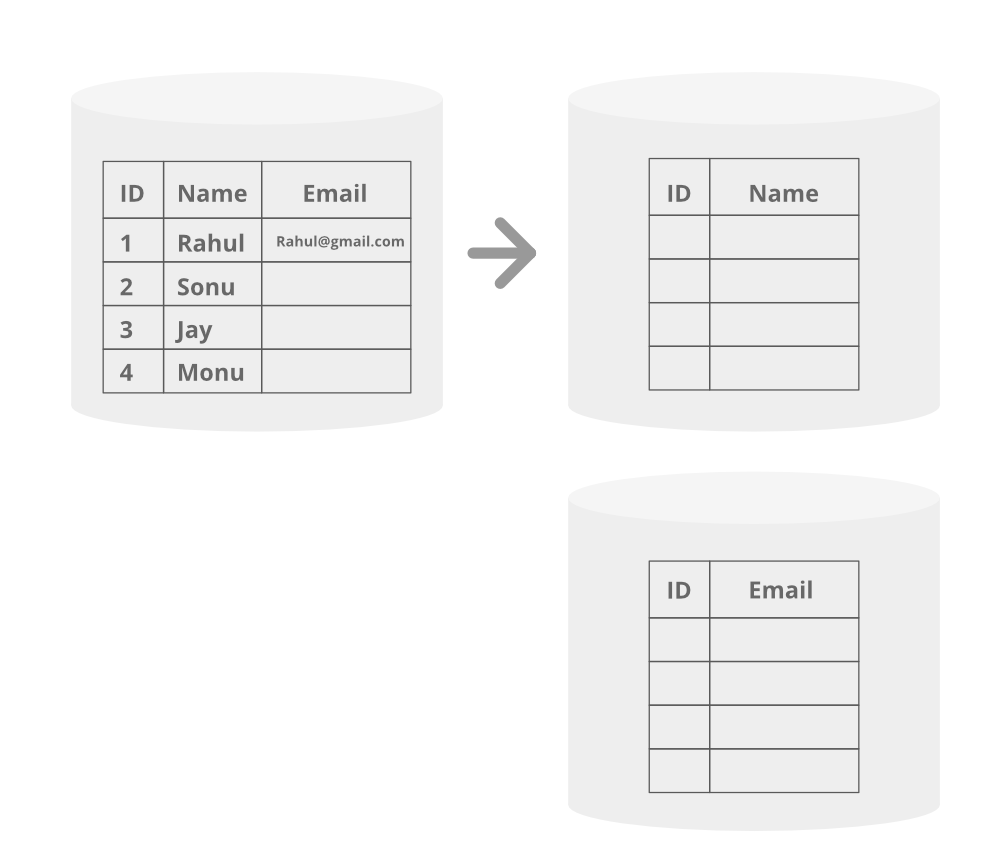 In this method, you can separate and handle the critical part (for example user profiles) non-critical part of your data (for example, blog posts) individually and build different replication and consistency models around it. This is one of the main advantages of this method.

The main drawback of this scheme is that to answer some queries you may have to combine the data from different shards which unnecessarily increases the development and operational complexity of the system. Also, if your application will grow later and you add some more features in it then you will have to further shard a feature-specific database across multiple servers.

In this method, we create and maintain a lookup service or lookup table for the original database. Basically we use a shard key for lookup table and we do mapping for each entity that exists in the database. This way we keep track of which database shards hold which data. 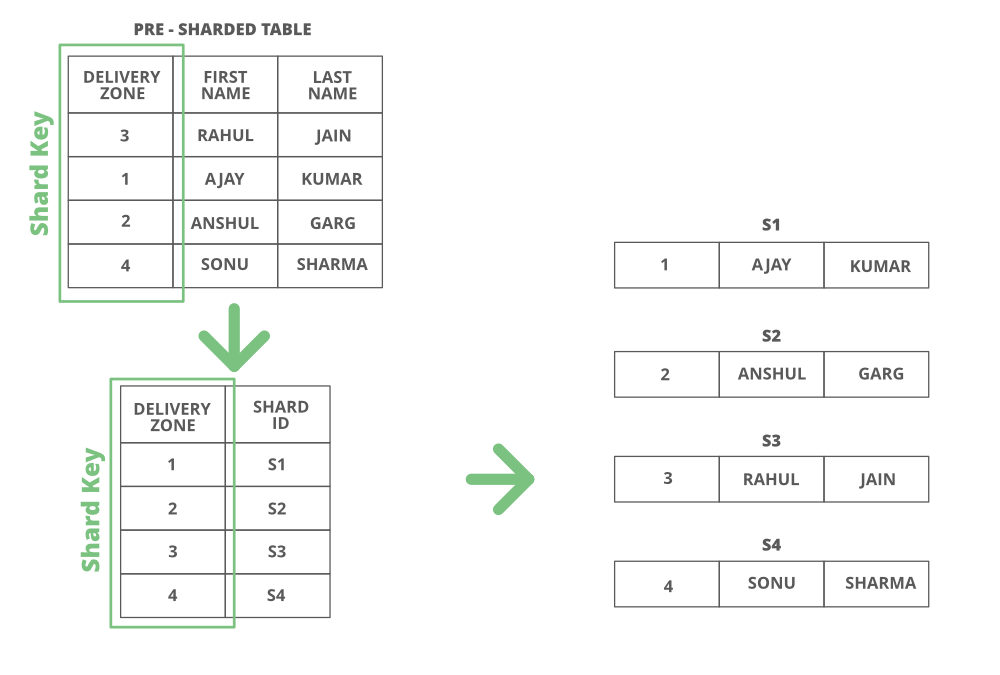 The lookup table holds a static set of information about where specific data can be found. In the above image, you can see that we have used the delivery zone as a shard key. Firstly the client application queries the lookup service to find out the shard (database partition) on which the data is placed. When the lookup service returns the shard it queries/updates that shard.

The major drawback of this approach is the single point of failure of the lookup table. If it will be corrupted or failed then it will impact writing new data or accessing existing data from the table.

Sharding is a great solution when the single database of your application is not capable to handle/store a huge amount of growing data. Sharding helps to scale the database and improve the performance of the application. However, it also adds some complexity to your system. The above methods and architectures have clearly shown the benefits and drawbacks of each sharding technique. So before you decide to choose any sharding method make sure you compare each one of them and depending on the type of information stored in the database, choose sharding or any one of the sharding techniques.

Read more about system design from the link How to Crack System Design Round in Interviews?