Data Structure Alignment : How data is arranged and accessed in Computer Memory?

Now we may think that the processor will allocate memory to this structure as shown below:

The total memory allocated in this case is 8 bytes. But this never happens as the processor can access memory with a fixed word size of 4 bytes. So, the integer variable c can not be allocated memory as shown above. An integer variable requires 4 bytes. The correct way of allocation of memory is shown below for this structure using padding bytes. 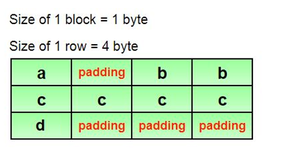 The processor will require a total of 12 bytes for the above structure to maintain the data alignment.
Look at the below C++ program:

For the first structure test1 the short variable takes 2 bytes. Now the next variable is int which requires 4 bytes. So, 2 bytes of padding are added after the short variable. Now, the char variable requires 1 byte but memory will be accessed in word size of 4 bytes so 3 bytes of padding is added again. So, a total of 12 bytes of memory is required. We can similarly calculate the padding for the second structure also. Padding for both of the structures is shown below:

Note: You can minimize the size of memory allocated for a structure by sorting members by alignment.
References :
1) https://en.wikipedia.org/wiki/Data_structure_alignment
2) https://stackoverflow.com/a/119134/6942060
This article is contributed by Mandeep Singh. If you like GeeksforGeeks and would like to contribute, you can also write an article using write.geeksforgeeks.org or mail your article to review-team@geeksforgeeks.org. See your article appearing on the GeeksforGeeks main page and help other Geeks.
Please write comments if you find anything incorrect, or if you want to share more information about the topic discussed above.