The Data-link layer is the second layer from the bottom in the OSI (Open System Interconnection) network architecture model. It is responsible for the node-to-node delivery of data. Its major role is to ensure error-free transmission of information. DLL is also responsible to encode, decode and organize the outgoing and incoming data. This is considered the most complex layer of the OSI model as it hides all the underlying complexities of the hardware from the other above layers.

The data link layer is further divided into two sub-layers, which are as follows:

This sublayer of the data link layer deals with multiplexing, the flow of data among applications and other services, and LLC is responsible for providing error messages and acknowledgments as well.

The data link layer receives the information in the form of packets from the Network layer, it divides packets into frames and sends those frames bit-by-bit to the underlying physical layer.

Functions of the Data-link Layer: 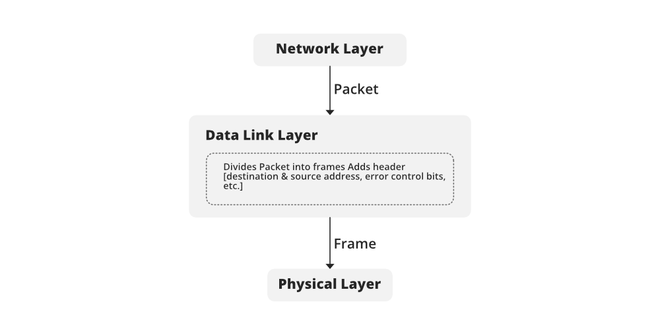 2. Addressing: The data link layer encapsulates the source and destination’s MAC address/ physical address in the header of each frame to ensure node-to-node delivery. MAC address is the unique hardware address that is assigned to the device while manufacturing.

3. Error Control: Data can get corrupted due to various reasons like noise, attenuation, etc. So, it is the responsibility of the data link layer, to detect the error in the transmitted data and correct it using error detection and correction techniques respectively. DLL adds error detection bits into the frame’s header, so that receiver can check received data is correct or not.

4. Flow Control: If the receiver’s receiving speed is lower than the sender’s sending speed, then this can lead to an overflow in the receiver’s buffer and some frames may get lost. So, it’s the responsibility of DLL to synchronize the sender’s and receiver’s speeds and establish flow control between them.

5. Access Control: When multiple devices share the same communication channel there is a high probability of collision, so it’s the responsibility of DLL to check which device has control over the channel and CSMA/CD and CSMA/CA can be used to avoid collisions and loss of frames in the channel.

There are various protocols in the data link layer, which are as follows: