The process by which plants convert carbon dioxide, water, and sunlight into oxygen and energy in the form of sugar is known as photosynthesis. Autotrophic plants produce their own food through a process called photosynthesis. Sunlight, chlorophyll, CO2, and water are four crucial components needed for this process. The two paces of photosynthesis are the Light Reaction and the Dark Reaction.

In the presence of light, this phenomenon takes place. As the pigment absorbs light, ATP is created, which is energy. The process includes light absorption, water splitting, oxygen release, and the production of ATP and NADPH. Two photosystems, PS-I and PS-II, both contain light-harvesting complexes made up of protein-bound pigment molecules. Each photosystem consists of antennae carrying auxiliary pigments and a reaction centre made up of chlorophyll a molecule. The reaction centre for PS-I is at P-700 because chlorophyll has an absorption peak at that wavelength, while PS-is II’s at P-680 because it has a different absorption peak.

This process occurs not in the presence of light in the stroma of the chloroplasts. The following cycles are involved in the process: the C3 cycle and the C4 cycle. The Dark reaction is called the carbon-fixing reaction.

Through the activation of PSII, photophosphorylation uses solar energy to convert ADP to ATP. In this, a process known as photolysis splits the water molecule into oxygen and hydrogen protons (H+). An ongoing, unidirectional flow of electrons from water to PS I is then carried out. Through the action of the enzyme ATP synthase, ATP is produced, and electrons travel spontaneously from donor to acceptor through an electron transport chain. A chain of redox reactions known as an “electron transport chain” sequentially transfers electrons from a high-energy molecule (the donor) to a lower-energy molecule (the acceptor).

The flow of protons from the stroma to the thylakoid space creates a transmembrane electrochemical potential gradient during the operation of the electron transport chain. This proton gradient is established as the power for ATP synthase activity, and ATP is subsequently produced by phosphorylation. Photophosphorylation is of two types: 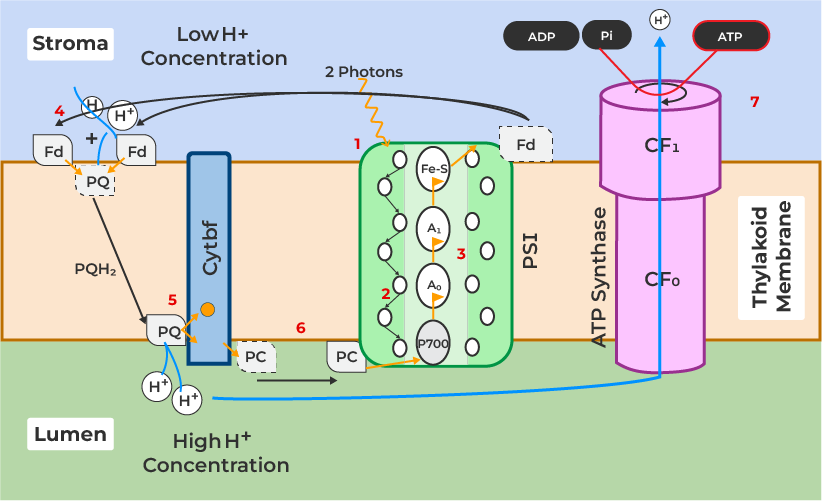 These are some steps in cyclic photophosphorylation:

At the start of the cyclic photophosphorylation process, PS I is hit by a photon, a particle with a quantum of light energy The PS I’s colours absorb the energy.

The electron of the P700 reaction centre is unstable.P700 reaction centre’s electron jumps out of its higher energy orbital and is captured by chlorophyll A0, from molecule A0 goes to molecule A1, which has a higher potential than AO, a cluster of iron and sulphur will now get the electron that was formerly in molecule A1. Fe-S releases the electron, which is then caught by Fd or ferredoxin. The stroma and the thylakoid membrane have water-soluble protein fd. This protein moved.  The electron of P700 moved from P700 to fd molecule.

Path of electrons from P700 to ferredoxin

Ferredoxin is an electron carrier. It transfers electrons from the Fe-S complex to PQ through the stroma.

Two hydrogen particles are moved by PQ or plastoquinone, it additionally requires 2e-. Each particle, including P700, Fd, PQ, and others, exists in many copies. one extra electron from the P700 moves from PS I to PQ with the guide of one more Fd as the subsequent photon strikes PS I.

Ions move over a selectively permeable membrane along their electrochemical gradient is called Chemiosmosis. Higher H+ ion concentrations are found in the lumen and lower H+ ion concentrations are found in the stroma. The incursion of H+ ions during the electron transport by pq. ATP synthesis transport of these H+ ions. ATP synthase produces ATP. Because the released electrons in this photophosphorylation come back to the PS I, it is known as cyclic photophosphorylation. 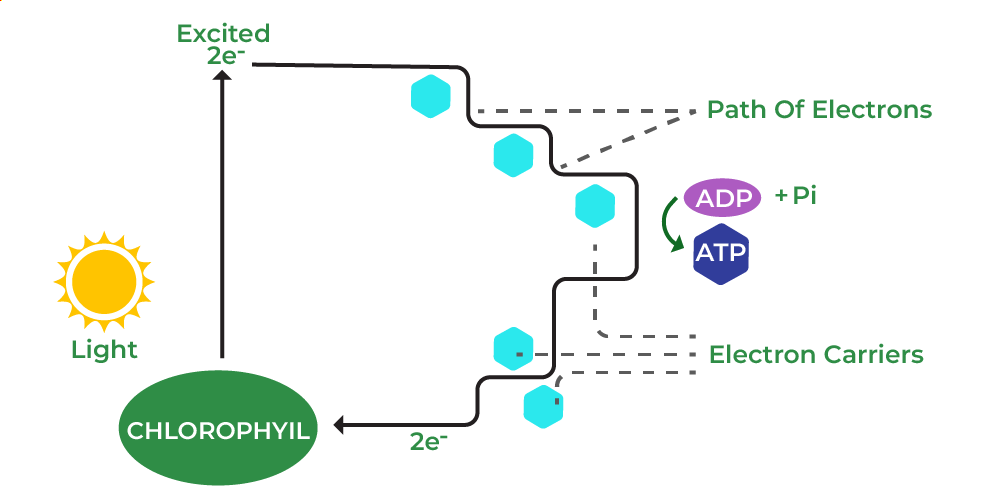 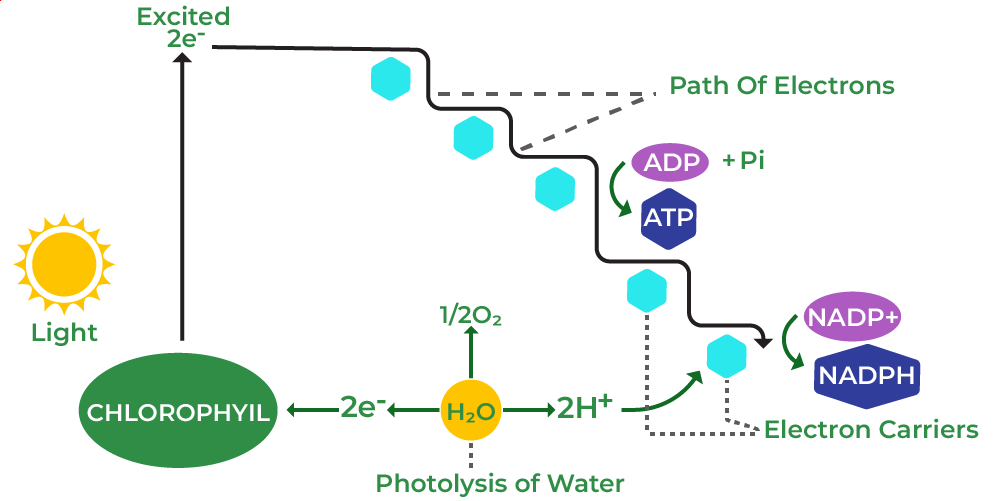 Reactions of photosystem I

PS I includes a P700 reaction centre and a bunch of accessory pigments. The following reactions are associated with PS I (photosystem I). 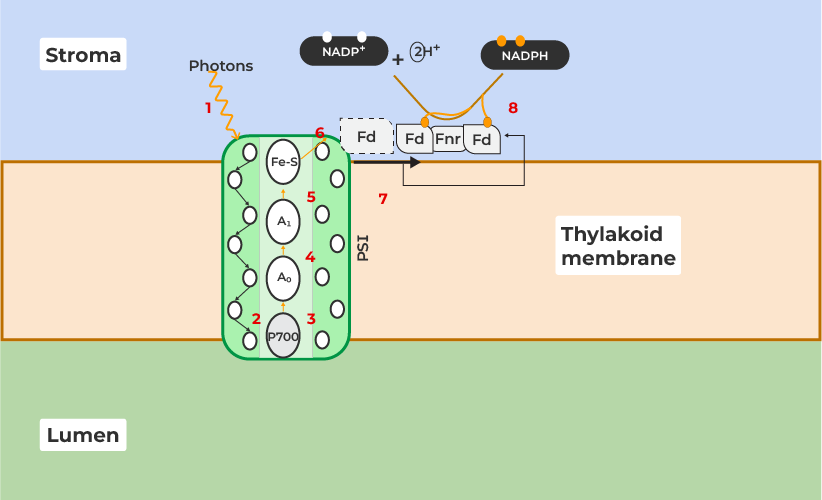 Reaction in photosystem I

One photon falls on photosystem I. The photon’s energy is moved to the pigments in the PS I.

The pigments retain the energy of the photon and begin vibrating. These vibrations are given starting with one pigment molecule onto the next until the energy in the vibrations is given to the P700 response focus. The peripheral e–of P700 retains power and gets excited to a higher energy level.

The P700 reaction centre’s higher energy orbital electron releases it, and another modified chlorophyll molecule accepts it. The electron to the A1 molecule has a more significant potential. The electron formerly in molecule A1 will now go to an iron-sulfur complex (Fe-S). decrease capability of the Fe-S complex is lower than that of ferredoxin, the following protein (Fd). Accordingly, Fd takes the electron that Fe-S gave up.

Fd is a small and water-soluble protein. Subsequent to acquiring the electron, ferredoxin (Fd) travels through the stroma to reach the electron acceptor, FNR. A catalyst called FNR catalyzes the change of one NADP+ into NADPH by moving two electrons from two Fds. The NADP+ gains these two electrons. It becomes NADPH now. NADPH is an electron transporter. 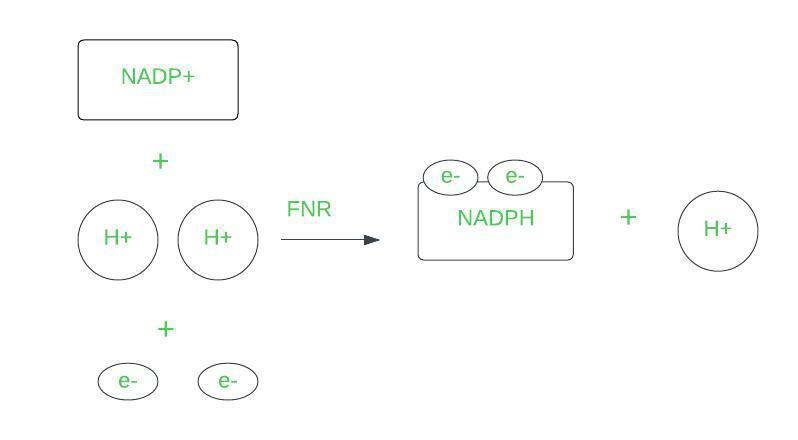 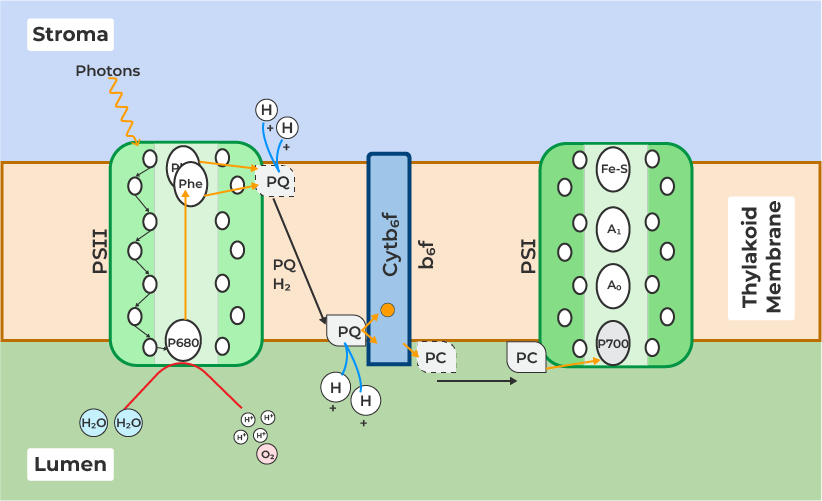 When a photon strikes photosystem II, accessory pigments take it in and absorb it.

Energy pass from the photon to the P680 reaction centre.

Comparing P680 to the following protein in the cascade, pheophytin, reveals that P680 has a larger redox potential due to the excited electron. As a result, Pheophytin receives the electron while the P680 reaction centre loses the electron.

Plastoquinone is present in the thylakoid membrane. It carries two electrons. A second electron is sent to the PQ protein from a second P680 reaction centre. Plastoquinone, or PQ, is converted to PQH2 by taking two pheophytins and two hydrogen ions from the stroma.

B6f covers the thylakoid membrane. Two H+ are released into the lumen and two electrons are moved to Cyt B6f once PQH2 reaches there.

The electron transfer to the next protein. Cytochrome b6f loses the election and phycocyanin gains the electron. Phycocyanin has two electrons present in the lumen. Pc gives an electron to P700. Two electrons from the Cyt b6f are utilised to satisfy the shortage of two electrons in the two P700s. There is an electron shortage in the two P680 reaction centres. The two P680 reaction centres receive their electrons from photolysis, the splitting of water molecules brought on by light. Now let’s see what is referred to as water photolysis.

Photolysis is the term for the light-dependent splitting of water. Manganese and chlorine both play significant roles in the PS-II process that is connected to this one. The electrons created during this procedure take the place of the electrons lost from P680. As a result of P680 absorbing light, a water molecule splits to liberate oxygen.

Number of electrons and protons

Similarities between Cyclic and Non-cyclic Photophosphorylation

FAQs on Cyclic and Non-Cyclic Photo-photophosphorylation

Question 1: What are two types of photophosphorylation?

Question 2: What is photophosphorylation?

Question 3: What is the non-cyclic photophosphorylation process?

When electrons are expelled from the exciting photo centre and do not reenter, non-cyclic photophosphorylation takes place. Only when both photosystems I and II are active does this process take place. Electrons are released as a result of the photolysis of water. Consequently, a consistent supply of water is needed for this operation. During this process, ATP and NADPH are both produced.

Question 4: In which case Cyclic photophosphorylation is ideal?

Only in the case of bacteria, the cyclic photophosphorylation method is ideal.

Question 5: How many ATP are formed in cyclic photophosphorylation?