As streaming is increasingly being adopted by users, online media players have become essential for consuming media on the internet. Music players allow one to enjoy music in any browser and supports a lot of the features of an offline music player.
We will be creating a music player with a clean user interface that can be used to play music in the browser. We will also implement features like seeking and volume control. HTML has several methods in the HTMLMediaElement interface that can be used to play audio files and control its playback without using any other library.
We will start by creating the HTML layout first that defines the structure of the player, make it look good by styling using CSS and then write the player logic for all the functions in JavaScript.

The HTML Layout
The HTML layout defines the element structure that would be shown on the page. The player can be divided into the following portions:

We will be using FontAwesome icons to get the icons for all the buttons used on the page. The custom CSS and JavaScript we will write later is also linked in the file.
The HTML code is as follows:


The CSS Styling
Using CSS we can style the different portions to make it more visually appealing:


The result of the HTML layout and CSS styling would give the following appearance: 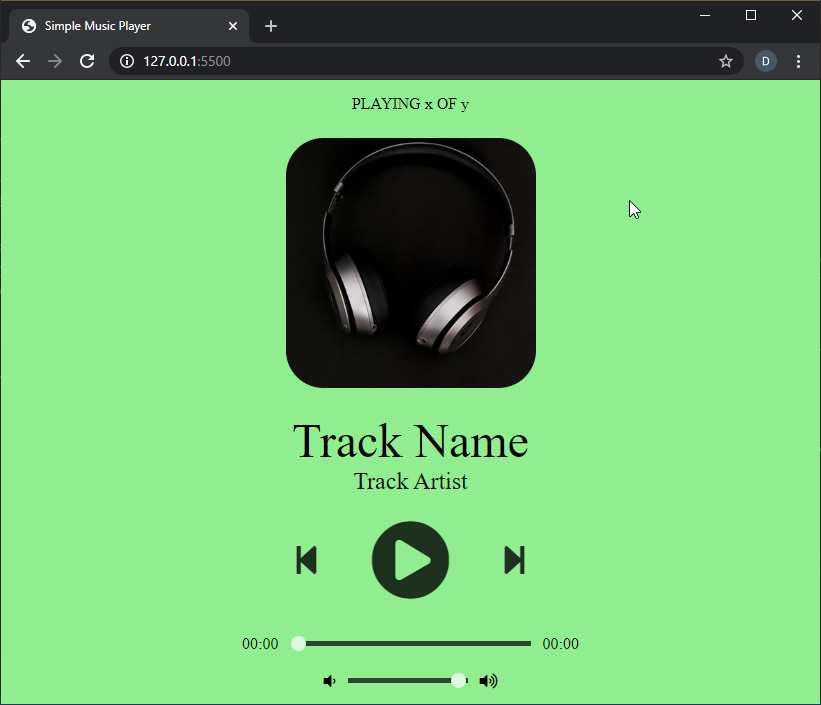 JavaScript logic of the player:
The logic of the player is defined in the JavaScript file. There are several functions that work together to handle all the functions of the player.
Step 1: Defining all the variables and accessing the HTML elements
The required elements in the HTML layout that are to be dynamically changed are first selected using the querySelector() method. They are then assigned variable names so that they could be accessed and modified. Other variables that would be accessed throughout the program are also defined.


Step 2: Loading a new track from the tracklist
All the tracks that have to be played are defined in the tracklist as objects. These objects contain properties like the name, artist, image and path to the track. Each of the tracks can then be accessed using its track index.
To load a track, a function loadTrack() is defined which handles the following things:


Step 4: Configuring the sliders portion
We will be setting up two sliders that control the seek slider and the volume slider.


Step 5: Starting the player
The first track is loaded by calling the loadTrack() function. This will load the first track from the tracklist and update all the details of the track. The user can then start playing the track using the play button. The previous and next track button would load the previous and next track respectively and start playing them.
The next track is automatically loaded when a track finishes playing. The user can seek to a position in the track using the seek slider. The volume can also be adjusted using the volume slider.


Final Demonstration
The player is now ready to be used in any browser. New tracks can be added to the tracklist to play the music of your choice.