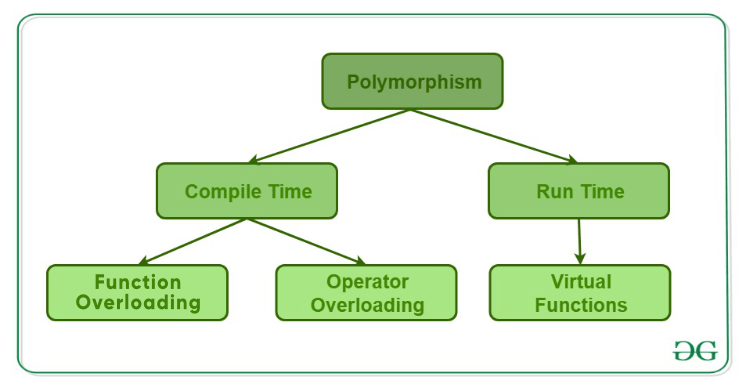 This type of polymorphism is achieved by function overloading or operator overloading.

When there are multiple functions with the same name but different parameters, then the functions are said to be overloaded, hence this is known as Function Overloading. Functions can be overloaded by changing the number of arguments or/and changing the type of arguments. In simple terms, it is a feature of object-oriented programming providing many functions to have the same name but distinct parameters when numerous tasks are listed under one function name. There are certain Rules of Function Overloading that should be followed while overloading a function.

Below is the C++ program to show function overloading or compile-time polymorphism:

Explanation: In the above example, a single function named function func() acts differently in three different situations, which is a property of polymorphism.
To know more about this, you can refer to the article – Function Overloading in C++.

C++ has the ability to provide the operators with a special meaning for a data type, this ability is known as operator overloading. For example, we can make use of the addition operator (+) for string class to concatenate two strings. We know that the task of this operator is to add two operands. So a single operator ‘+’, when placed between integer operands, adds them and when placed between string operands, concatenates them.

Below is the C++ program to demonstrate operator overloading:

Explanation:  In the above example, the operator ‘+’ is overloaded. Usually, this operator is used to add two numbers (integers or floating point numbers), but here the operator is made to perform the addition of two imaginary or complex numbers.
To know more about this one, refer to the article – Operator Overloading.

Function Overriding occurs when a derived class has a definition for one of the member functions of the base class. That base function is said to be overridden. 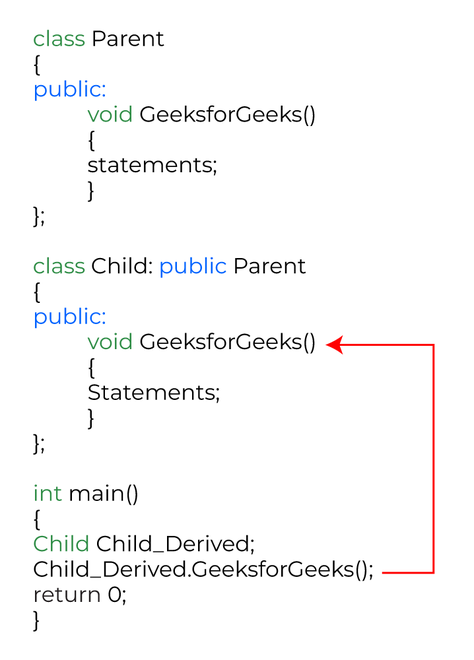 Below is the C++ program to demonstrate function overriding:

A virtual function is a member function that is declared in the base class using the keyword virtual and is re-defined (Overridden) in the derived class.

Some Key Points About Virtual Functions:

Below is the C++ program to demonstrate virtual function:

This article is contributed by Harsh Agarwal. If you like GeeksforGeeks and would like to contribute, you can also write an article using write.geeksforgeeks.org or mail your article to review-team@geeksforgeeks.org. See your article appearing on the GeeksforGeeks main page and help other Geeks. Please write comments if you find anything incorrect, or if you want to share more information about the topic discussed above.

Previous
Inheritance in C++
Next
Encapsulation in C++
Related Articles
1. Virtual Functions and Runtime Polymorphism in C++
2. Difference between Inheritance and Polymorphism
3. Runtime Polymorphism in various types of Inheritance in C++
4. Copy File To Vector in C++ STL
5. Department Store Management System(DSMS) using C++
6. Build a C++ Program that Have Multiple Source Code Files
7. Program to Find Class From Binary IP Address Classful Addressing
8. Extracting IP Address From a Given String Using Regular Expressions
9. How to Parse an Array of Objects in C++ Using RapidJson?
10. How to Print String Literal and Qstring With Qdebug in C++?
Article Contributed By :