Count of strings that does not contain Arc intersection

Given an array arr[] consisting of N binary strings, the task is to count the number of strings that does not contain any Arc Intersection.

Connecting consecutive pairs of identical letters using Arcs, if their is an intersection obtained, then it is known as Arc Intersection. Below is the illustration of the same. 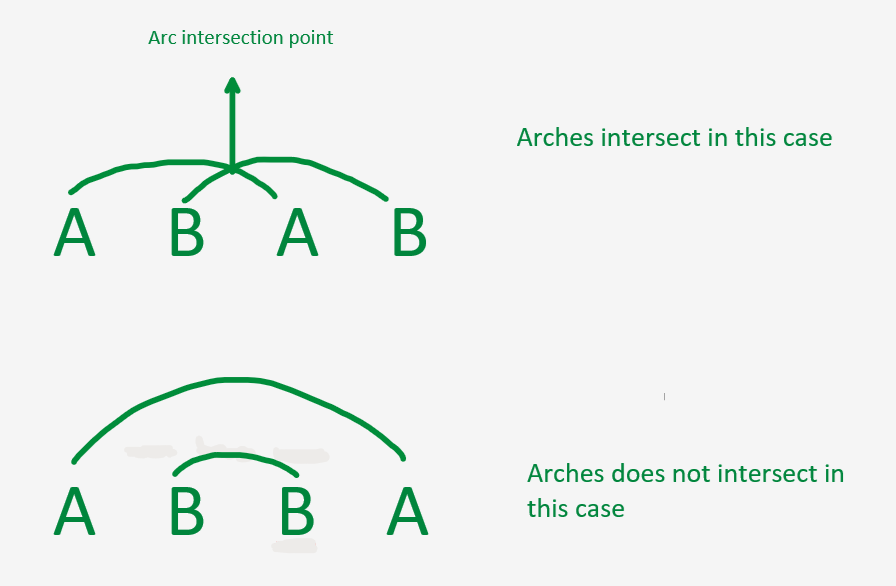 Naive Approach: The simplest approach is to traverse the array and check for each string, if similar characters are grouped together at consecutive indices or not. If found to be true, keep incrementing count of such strings. Finally, print the value of count obtained.

Time Complexity: O(N*M2), where M is the maximum length of string in the given array.
Auxiliary Space: O(1)

Efficient Approach: To optimize the above approach, the idea is to use Stack. Follow the steps below to solve the problem:

Complete Interview Preparation
View Details
System Design-Live Classes for Working Professionals
View Details
Most popular in Arrays
Most visited in Stack
We use cookies to ensure you have the best browsing experience on our website. By using our site, you acknowledge that you have read and understood our Cookie Policy & Privacy Policy