In R Programming Data frame is nothing but a two-dimensional entity that consists of rows and columns whereas Lists in R are data structures that are able to store multiple data values at once.

Lists in R can be created using list() function.

In R programming there is no direct function that converts data frame to list so we need to convert it using loop and code for that is given below. 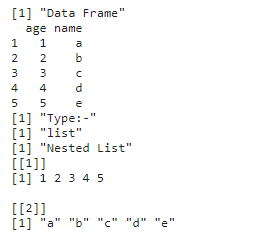 As in R Programming, there are no in-built functions to convert data frame to list, following are the steps to convert