Constructor Chaining In Java with Examples

Constructor chaining is the process of calling one constructor from another constructor with respect to current object.

Constructor chaining can be done in two ways:

Constructor chaining occurs through inheritance. A sub-class constructor’s task is to call super class’s constructor first. This ensures that the creation of sub class’s object starts with the initialization of the data members of the superclass. There could be any number of classes in the inheritance chain. Every constructor calls up the chain till the class at the top is reached.

Why do we need constructor chaining?

Constructor Chaining within the same class using this() keyword: 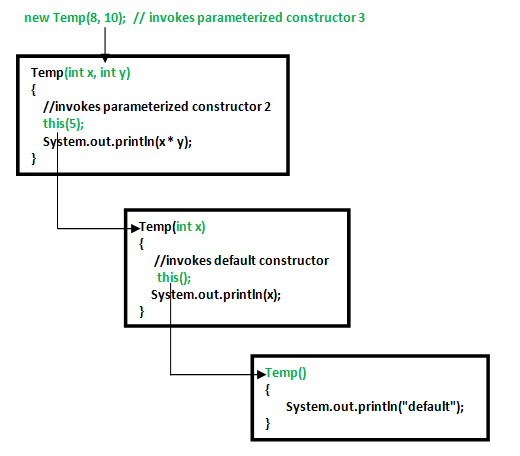 What happens if we change the order of constructors?
Nothing, Constructor chaining can be achieved in any order

NOTE: If there are more than one blocks, they are executed in the order in which they are defined within the same class. See the ex.
Example :

This article is contributed by Apoorva singh. If you like GeeksforGeeks and would like to contribute, you can also write an article using write.geeksforgeeks.org or mail your article to review-team@geeksforgeeks.org. See your article appearing on the GeeksforGeeks main page and help other Geeks.
Please write comments if you find anything incorrect, or you want to share more information about the topic discussed above.