1 (a) Explain Conditional Operator with suitable example? 2 Conditional operator is also known as ternary operator because it requires three operands and can be used to replace simple if-else code. It is used to check the condition and execute first expression if condition is true else execute other.

Explanation: If the conditional expression is true then expression 1 executes otherwise expression 2 executes.

(b) Which C++ header file(s) are essentially required to be included to run/execute the following C++ code : 1


<iostream.h> for input output <string.h> for strcat function (c) Rewrite the following program after removing the syntactical errors (if any). Underline each correction.


Correction in the code:


(d) Write the output of the following C++ program code: Note: Assume all required header files are already being included in the program.

(e) Write the output of the following C++ program code: Note: Assume all required header files are already being included in the program.

(f) Observe the following program carefully and attempt the given questions:


(b) Answer the questions(i) and (ii) after going through the following class:


I. What is Function 1 referred as? When will it be executed? I. Constructor. It will be executed at the time of object creation. II. Write suitable C++ statement to invoke Function. 2 II. planet p; p.display(“Pluto”, ”7.5 Billion Km”); (c) Define a class DanceAcademy in C++ with following description: Private Members Enrollno of type int Name of type string Style of type string Fee of type float A member function chkfee( ) to assign the value of fee variable according to the style entered by the user according to the criteria as given below:


(d) Answer the questions (i) to (iv) based on the following:


(i) Name the type of inheritance illustrated in the above C++ code. Multiple Inheritance. (ii) Write the names of all the members, which are accessible from the objects belonging to class outdoor_sports. Data Members: None Member Functions: oEntry(), oShow() (iii) Write the names of all the member functions, which are accessible from the member function of class sports. registration(), showdata(), oEntry(), oShow(), get_ofee(), iEntry(), iShow(), get_ifee() (iv) What will be the size of the object belonging to class indoor_sports? 46 Bytes 3(a) Write the definition of a function grace_score (int score [], int size) in C++, which should check all the elements of the array and give an increase of 5 to those scores which are less than 40. 3 Example: if an array of seven integers is as follows: 45, 35, 85, 80, 33, 27, 90 After executing the function, the array content should be changed as follows: 45, 40, 85, 80, 38, 32, 90

Hence the final result is 2700 4(a) Find the output of the following C++ code considering that the binary file already exists on the hard disk with 2 records in it.


Ans: 42 84 (b) Write a user defined function word_count() in C++ to count how many words are present in a text file named “opinion.txt”. For example, if the file opinion.txt contains following text: Co-education system is necessary for a balanced society. With co-education system, Girls and Boys may develop a feeling of mutual respect towards each other. The function should display the following: Total number of words present in the text file are: 24


(c) Write a function display () in C++ to display all the students who have got a distinction(scored percentage more than or equal to 75) from a binary file “stud.dat”, assuming the binary file is containing the objects of the following class:

1 (a) Carefully observe the following python code and answer the questions that follow:


On execution the above code produces the following output.

Explain the output with respect to the scope of the variables. 2 Names declared with global keyword have to be referred at the file level. This is because the global statement indicates that the particular variable lives in the global scope. If no global statement is being used, the variable with the local scope is accessed. Hence, in the above code the statement succeeding the statement global x informs python to increment the global variable x Hence the output is 6 i.e 5+1 which is also the value for global x. (b) Name the modules to which the following functions belong: 1 a. uniform() b. fabs() a. random() b. math() (c) Rewrite the following code after removing the syntactical errors (if any). Underline each correction. 2


(d) Observe the following Python code carefully and obtain the output, which will appear on the screen after execution of it. 2

(e) What output will be generated when the following Python code is executed? 3


(f) Observe the following program and answer the questions that follow:


a. What is the minimum and maximum number of times the loop will execute? Minimum Number = 1 Maximum Number = 3 b. Find out, which line of output(s) out of (i) to (iv) will not be expected from the program? i. 0#1 ii. 1#2 iii. 2#3 iv. 3#4 Line iv is not expected to be a part of the output 2a. Explain the two strategies employed by Python for memory allocation. Python uses two strategies for memory allocation: i. Reference counting ii. Automatic garbage collection. Reference Counting: works by counting the number of times an object is referenced by other objects in the system. When an object’s reference count reaches zero, Python collects it automatically. Automatic Garbage Collection: Python schedules garbage collection based upon a threshold of object allocations and object deallocations. When the number of allocations minus the number of deallocations are greater than the threshold number, the garbage collector is run and the unused block of memory is reclaimed. b. Observe the following class definition and answer the questions that follow:


i. Write statement to invoke Function 1. print I ii. On Executing the above code, Statement 2 is giving an error explain. The statement 2 is giving an error because __Systemdate is a private variable and hence cannot be printed outside the class. c Define a class PRODUCT in Python with the following specifications. Data members: Pid – A string to store product id. Pname – A string to store the name of the product. Pcostprice – A decimal to store the cost price of the product Psellingprice – A decimal to store Selling Price Margin – A decimal to be calculated as Psellingprice – Pcostprice Remarks – To store ”Profit” if Margin is positive else “Loss” if Margin is negative. Member Functions: A constructor function to initialize All the data members with valid default values. A method SetRemarks() that assigns Margin as Psellingprice – Pcostprice and sets Remarks as mentioned below:


i. Which type of Inheritance is demonstrated in the above code? Multiple Inheritance ii. Explain Statement 1 and 2. Statement 1 and 2 invoke the getSdata() function of class Shop and getData() function of class Brand respectively. iii. Name the methods that are overridden along with their class name. getdata() method of class Brand is overridden. When object of class Mall is created, M = Mall() M.getdata() getdata() method of class Mall is invoked and not of class Brand is called. iv. Fill Blank 1 with a statement to display variable category of class Brand. print Brand().category 3a. Consider the following unsorted list: 95 79 19 43 52 3 Write the passes of bubble sort for sorting the list in ascending order till the 3rd iteration. 3 Solution: [79, 19, 43, 52, 3, 95] [19, 43, 52, 3, 79, 95] [19, 43, 3, 52, 79, 95] b. Kritika was asked to accept a list of even numbers but she did not put the relevant condition while accepting the list of numbers. You are required to write a code to convert all the odd numbers into even by multiplying them by 2. 3


c. Aastha wants to create a program that accepts a string and display the characters in the reverse order in the same line using a Stack. She has created the following code, help her by completing the definitions on the basis of requirements given below : 4 class mystack: def __init__(self): self.mystr= ________________ # Accept a string self.mylist =________________ # Convert mystr to a # list Write code to display while removing elements from the stack. def disp(self): : :


d. Write a generator function generates q() that displays the squareroots of numbers from 100 to n where n is passed as an argument. 2

4a Observe the following code and answer the questions that follow: File = open(“Mydata”, “a”) _____________________ #Blank1 File.close() i. What type (Text/Binary) of file is Mydata? Text File ii. Fill the Blank 1 with statement to write “ABC” in the file “Mydata” File.write(“ABC”) b) A text file “Quotes.Txt” has the following data written in it: Living a life you can be proud of Doing your best Spending your time with people and activities that are important to you Standing up for things that are right even when it’s hard Becoming the best version of you Write a user defined function to display the total number of words present in the file.

c. Consider the following class declaration and answer the question that follows:

i. What is the cardinality and degree of the above given table? Cadinality: 4 Degree: 5 ii. If a new column contact_no has been added and three more members have joined the club then how these changes will affect the degree and cardinality of the above given table. Cardinality: 7 Degree: 6 (b) Write SQL commands for the queries (i) to (iv) and output for (v) to(viii) based on the tables ‘Watches’ and ‘Sale’ given below.

i. To display all the details of those watches whose name ends with ‘Time’

ii. To display watch’s name and price of those watches which have price range in between 5000-15000.

iv. To display watch name and their quantity sold in first quarter.

6 (a) Correct the following boolean statements:

(b) Draw the equivalent logic circuit for the following Boolean expression: (A.B)+C 1

(c) Write the POS form of a Boolean Function F, which is represented in a truth table as follows: 2 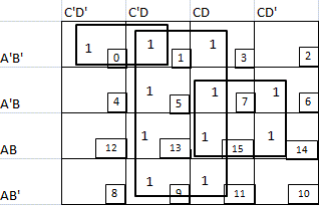 7 (a) Identify the type of topology on the basis of the following: 1. Since every node is directly connected to the server, a large amount of cable is needed which increases the installation cost of the network. 2. It has a single common data path connecting all the nodes. Answer: 1. Star Topology 2. Bus Topology (b) Expand the following: 1 a. VOIP: Voice Over Internet Protocol b. SMTP: Simple Mail Transfer Protocol (c) Who is a hacker? 1 A computer enthusiast, who uses his computer programming skills to intentionally access a computer without authorization is known as hacker. A hacker accesses the computer without the intention of destroying data or maliciously harming the computer. (d) The following is a 32 bit binary number usually represented as 4 decimal values, each representing 8 bits, in the range 0 to 255 (known as octets) separated by decimal points 140.179.220.200. What is it? What is its importance? 1 It is an IP Address.It is used to identify the computers on a network. (e) Daniel has to share the data among various computers of his two offices branches situated in the same city. Name the network (out of LAN, WAN, PAN and MAN) which is being formed in this process. 1 Answer: MAN (f) Rehaana Medicos Center has set up its new center in Dubai. It has four buildings as shown in the diagram given below: 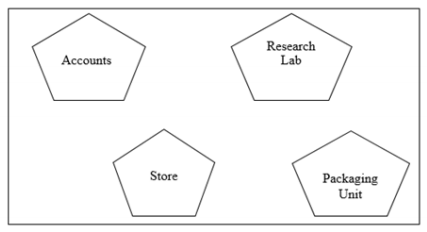 As a network expert, provide the best possible answer for the following queries: i) Suggest a cable layout of connections between the buildings. 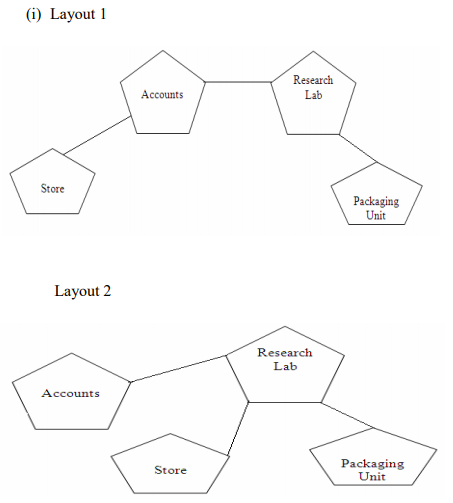