In the early 80s PCs became more popular and easily accessible to the general population, this also led to the increased use of computers in all fields and criminal activities were no exception to this. The word “forensics” means the use of science and technology to investigate and establish facts in criminal or civil courts of law. Forensics is the process of using scientific knowledge for analyzing and presenting evidence to the court.

Computer forensics is a branch of digital forensic science concerned with evidence found in computers and digital storage media, it is defined as the discipline that combines elements of law and computer science to collect and analyze data from wireless communications, computer systems, networks, and storage devices in a way that is permissible as evidence by the court. Because computer forensics is a new discipline, there are not many standard rules or practices for it, there is little standardization and consistency across the industry and courts.

There are multiple types of computer forensics depending on the field in which digital investigation is needed. The fields are: 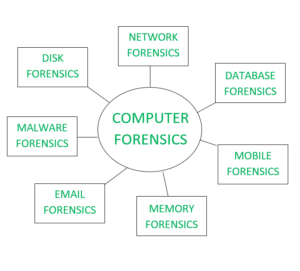 Various kinds of techniques are used in computer forensics investigation such as: