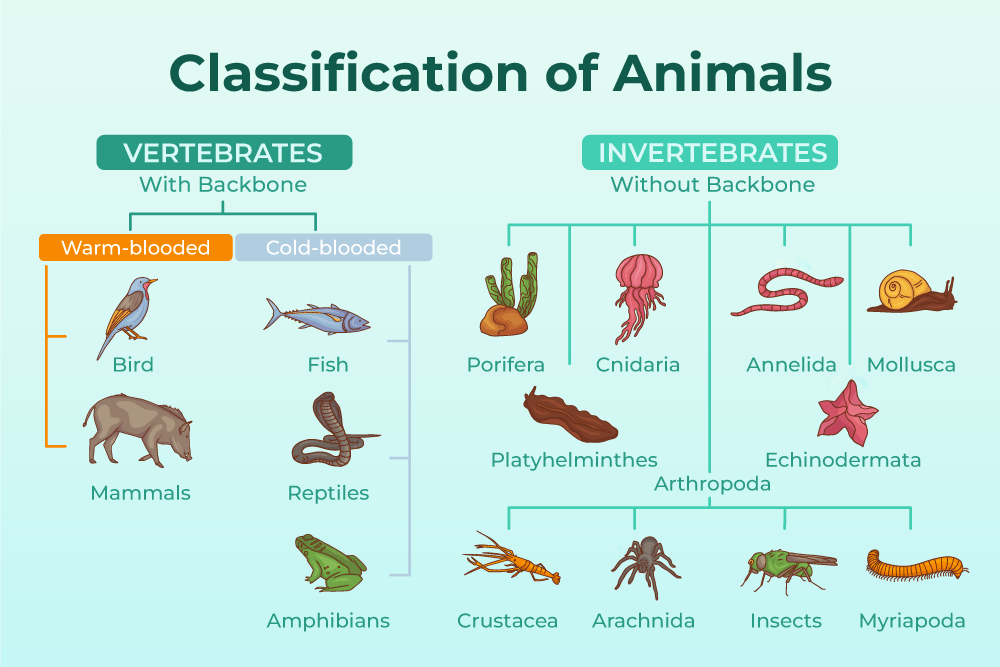 The organisms belonging to this phyla are usually known as sponges. These sponges have the system of water transport system in their body. These are usually marine animals, which means most of them live in oceans and seas. These are multicellular organisms and have cellular levels. The skeleton of these organisms is made up of spicules. Reproduction in sponges is done asexually by the process of fragmentation and sexually by the process of Gametes formation. Fertilization in these organisms is internal.

These organisms are more symmetrical when compared to other organisms. These are mostly aquatic and free-swim animals that live in marines, seas, and other aquatic places. These organisms have Cnidoblasts on their tentacles and body. These Cnidoblasts are used in their defense mechanism and to capture the food. Cnidarians have mainly two body forms known as polyp and medusa. Polyp produces medusae using asexual reproduction and medusae produce polyp using sexual reproduction.

Ctenophores are usually known by the names such as Sea walnuts. These are diploblastic organisms that live in marines and are radially symmetric. The organization in these organisms is of tissue-level organization. The process of digestion takes place both intracellularly and extracellularly. In Ctenophores reproduction takes place only by sexual reproduction. fertilisation take place
externally.

They have flattened body-like structures. So, they are called flatworms. These organisms are found in many organisms including human beings. parasitic worms have hooks and suckers on their body. Many of these flatworms absorb nutrients from their host’s body directly through their body to survive. These organisms have special cells named flame cells which help in the process of excretion. Sexes are not separate in these worms. The process of fertilization occurs internally and development happens through several larva stages.

The largest phylum among Animalia is Arthropoda. This phylum includes insects. Almost 66 percent of species on earth belong to the phylum of Arthropoda. The organisms in this phylum have organs in their body. These organisms are bilaterally symmetrical. In these kinds of organisms, excretion takes place through Malpighian tubes. Their bodies consist of the head, eyes, thorax, abdomen, etc. Respiration in Arthropods takes place through the lungs and gills. Fertilization is mostly internal and development happens either directly or indirectly.

The second largest phylum after Arthropoda in the whole animal kingdom is the Mollusca phylum. The organisms that belong to this phylum are both aquatic and terrestrial animals. They can live in both fresh water and brine water. The body of these organisms is covered with a shell called a calcareous shell. With a muscular foot, visceral mass, and head, its body is unsegmented. The space between mantle and visceral mass is usually known as the mantle cavity. They have gills-like structures to breathe. These are mostly unisexual.

Mostly, organisms belonging to the phylum of Echinodermata are marine animals. They live in salt water. Fully grown echinoderms are radially symmetrical. But, in the larva stage, they are bilaterally symmetrical. They possess a water vascular system for locomotion, the process of respiration, and capturing food. There are no specially defined excretory organs in these organisms. The nervous system and sense organs are poorly developed in echinoderms and the brain is absent. sexes are mostly separate and the fertilization process is external.

The phylum hemichordate was initially placed in the sub-phylum of Chordata. Now it is considered a separate phylum under non-chordates. These organisms are worm-like structures and mostly aquatic animals. They mostly live in marine water. Their body is in a cylindrical structure. Respiration in these creatures is done through gills that open into the pharynx. They have a dorsal heart.

The animals which don’t have notochord in their body come under the category of non-chordates. The central nervous system present in non-chordates is non-ganglionated, dorsal, hollow, and single. Phylum like Porifera, Arthropoda, Annelida, Aschelminthes, Platyhelminthes, Ctenophora, and Coelenterata are the parts of non-chordates.

The animals which have notochord in their body come under the category of chordates.
Chordates are further classified into three subphyla:

These organisms are usually cold-blooded animals and have organs in their bodies. Amphibians require aquatic habitats or places to lay their eggs. These organisms do respiration mainly through their skin. They have two limbs and moist skin which helps in respiration.

Organisms belonging to a class of Reptilia are most commonly cold-blooded animals and have scales-like structures on their bodies. Reptiles have skeletons and external ears. But, some reptiles like snakes don’t have any ears and are deaf. They know about animals by the vibrations through the ground.

Most of the Aves are birds. The bodies of Aves are designed to have low air resistance. Because to fly in the air. Aves have external limbs, legs, feathers, and wings. These are warm-blooded animals and have control over their body temperatures. Most of the Aves have beaks to get their food.

Example: pigeons and parrots (all birds)

Mammals are warm-blooded animals and have organs in their bodies. Mammals have external ears, hair, and eyes, and have four limbs. Mammals give birth directly to their new generation. Humans belong to the class of mammals. Mammals have skin that covers all the internal organs. With the help of limbs, mammals can walk, swim and do many other things.

Example: all fishes come under this class.

FAQs on Classification of Animal Kingdom

Question 1: Name any five phyla of the animal kingdom.

Question 2: What is the phylum Annelida? Explain with some examples.

Question 3: What are the types of chordates?

Chordates are classified into three subphyla. They are,

Question 4: How does a snake know about the movement of its surrounding animals?

Snake knows about its surrounding animals by the vibrations through the ground.

The animal kingdom is also called “Animalia”. It is a multicellular, eukaryotic organism.