Class Based vs Function Based Views – Which One is Better to Use in Django?

Django…We all know the popularity of this python framework all over the world. This framework has made life easier for developers. It has become easier for developers to build a full-fledged web application in Django. If you’re an experienced Django developer then surely you might have been aware of the flow of the project. How things run in the boilerplate of Django and how data gets rendered to the user. 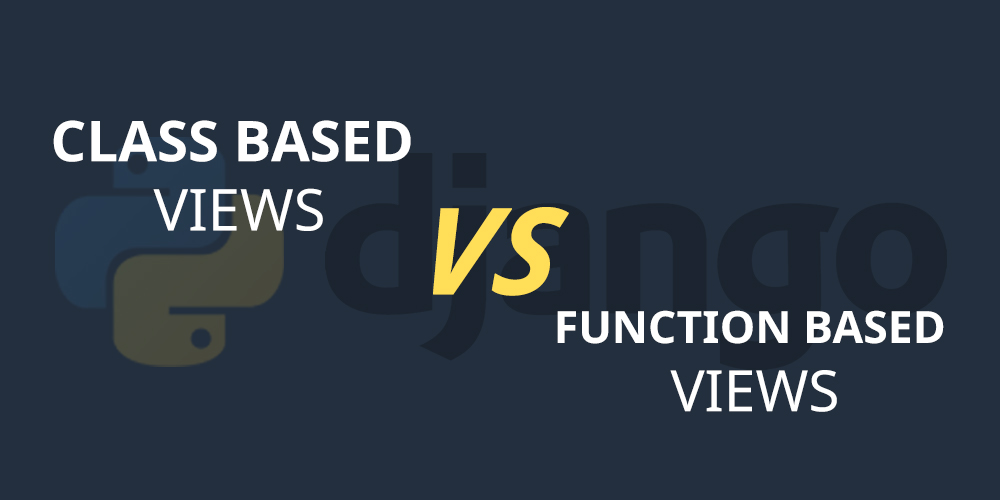 Django works on the MVT concept we mainly work on two types of views in it… class-based views and function-based views. If you’re new to the Django framework then surely you might have been using FBVs (Function Based Views).

Initially, Django started with the Function Based Views but later Django added the concept of class-based views to avoid the redundancy of code in the boilerplate. It is a debate among developers which one is better to use in Django… class-based views or function-based views? Today in this blog we are going to discuss this topic in-depth to get to know the pros and cons of both of the views.

You can accomplish your task using both of them. Some tasks can be best implemented using CBVs and some of them can be implemented in FBVs. Django views have mainly three requirements…

Now let’s compare both of the views and see the pros and cons of both of them.

As we have discussed function-based views are easy to understand but due to the code redundancy in a large Django project, you will find similar kinds of functions in the views. You will find a similar kind of code is repeated unnecessarily.

Here is an example of a function-based view…


All the above cons of FBVs you won’t find in class-based views. You won’t have to write the same code over and over in your boilerplate.

Below is an example of a class-based view…


We have a little abstraction and method as_view() is calling the dispatch() to determine which class method needs to be executed, depending on the HTTP request. as_view() let you override the class attributes in your URLs confs. You can do something like the below…


Once you start using the Django generic class-based views, you will be able to over-write the helper method like get_form_class and get_template_names. You can insert the additional logic at these points instead of just overriding the class attribute.

Creating a new object, form handling, list views, pagination, archive views all these things are the common use cases in a Web application. It comes in Django core, you can implement them from the module django.views.generic. Generic class-based views are a great choice to perform all these tasks. It speeds up the development process.

Django provides a set of views, mixins, and generic class-based views. Taking the advantage of it you can solve the most common tasks in web development.

The main goal is not to reduce the boilerplate. It saves you from writing the same code again and again. Modify MyCreateView to inherit from django.views.generic.CreateView.


You might be thinking that where all the code disappears. The answer is that it’s all in django.views.generic.CreateView. You get a lot of functionality and shortcuts when you inherit from CreateView. You also buy into a sort of ‘convention over configuration.’ style arrangement. Let’s discuss few more details…

Look at the example given below to check how it will look like.

In the implementation of the list view, you can get it working by subclassing the ListView and overriding the attributes. In a scenario where you need to perform the more complex operation, handling multiple forms at once, a function-based view will be a better choice for you.