The most basic framework unit of life is the cell. Different cells perform different functions in an organism like DNA repair, protein synthesis, etc. The size of the cell is very small i.e., in micrometers. Cells are usually seen by a microscope and not by naked eyes. Organelles like Golgi bodies, ER, and the nucleus is present in the cells. It is the smallest compartment in an organism. These are usually known as the monad of life. All the cells are covered by a different number of membranes. Some are single membrane cells and some are double membrane cells.  Cell biology is the study of cell structure and functions. Robert Hooke was the first person who discovered cells. The smallest cells are mycoplasmas. Cells convert food into energy through different processes. The number of cells varies from organism to organism. In some cases, the structure of the cell i.e., its shape and size define its function in the organism.

Organelle for Locomotion in cells 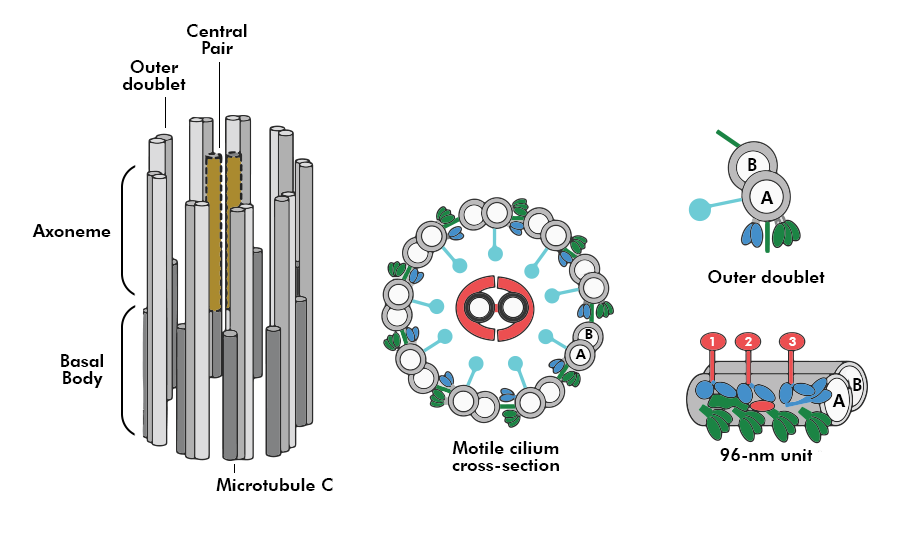 Two types of organelles are seen in cells for locomotion.

It is present on certain microorganisms like ciliates and also on the surface of membrane-bound organelles. The singular form of cilia is known as cilium. Bacteria and Archaea lack cilia in them. The shape of the cilia is slender like long threadlike projections and it extends from the surface of the cell surface. Many different protozoans have different locomotory structures than cilia and the order of their motion also differs from cilia. Majorly there are two different types of cilia is present one is motile whereas another one is non-motile cilia. Both these types have one subcategory in them. The number of cilia present in an organism can vary from one to many. The cilium class is determined by the structure of the cilium core known as the axoneme. 9+2 axoneme means having central pair of single microtubules surrounded by nine pairs of double microtubules, this type of arrangement is usually seen in motile cilia whereas in non-motile cilia the arrangement is 9+0 which means it doesn’t have central pair of microtubules. Due to the absence of the central pair of microtubules, it also lacks the mobility of the inner and outer arms along with radial spokes. Primary cilia and sensory cilia are the usual names of non-motile cilia. These are also served as sensory organelles. In vertebrates, the cilia are usually single non-motile that acts as a cellular antenna. Many non-motile cilia are possessed by olfactory neurons. On the respiratory epithelial cells, there is a large number of motile cilia i.e., approx. around 200 cilia per cell. The function of cilia on the respiratory epithelial cells is mucociliary clearance and mechanosensory and chemosensory functions. Cerebrospinal fluid is moved through the ventricular system of the brain by the motile cilia present in ependymal cells. Eggs in the females are moved from the ovary to the uterus by the cilia present in the fallopian tubes present there.

The organ of locomotion in many living organisms is a hairlike structure. Its singular form is called a flagellum. Protozoan group Mastigophora has the characteristic feature of having flagella. But it is also found in the gametes of mosses, fungi, slime molds, algae, and animals. In sponges and coelenterates, the water current that is necessary for respiration and circulation is generated by flagella. Locomotion in mostly bacteria occurs through flagella. Prokaryotic flagella and eukaryotic flagella differ in their structure and in the pattern of movement. The characteristic pattern in eukaryotes is a whiplike manner. In eukaryotes, the presence of flagella can vary from one to many. The structure of flagella is very much similar to that of cilia. By a basal body of the cell, the base of flagella is attached to the cell. The shape of flagella in bacteria is helical and it also has protein flagellin in it. The motion of flagella is similar to that of a propeller i.e., in a clockwise direction or in a counterclockwise direction. ATP is needed for the movement of flagella in eukaryotes whereas prokaryotes use the proton-motive force for their movement. Protists that have flagella are known as flagellates.

Differences between cilia and flagella

Question 1: There is a myth that prokaryotic cells are more in number than eukaryotic cells in the human body which are believed by biologists. Is this true?

The scientists have not calculated the cells in our body it is just an estimated number. The fact is that the size of prokaryotic cells are much smaller than that of eukaryotic cells so it can be said that their number is more but they only contribute less than 3% in body’s mass.

Question 2: Give us the reason for the death of cells.

Majorly, there are two ways in which a cell can die i.e., apoptosis and necrosis. Apoptosis which is also termed programmed death usually it is a part of development in fine tunes our brain and sculpts our fingers and toes. Necrosis is not a natural death of cells it is caused by accident, exposure to toxics, and infections.

Question 3: What is the maximum life span of a cell?

Different cells have a different life spans. Like RBCs have a life span of 70-140 days, small intestine cells survive for 2-4 days, and skin cells have a maximum life of 10-30 days. Some cells stay for your entire life that is brain and egg cells.

Question 4: Give the disorders caused by cilia.

Question 5: Give the functions of flagella.