Chromium (Cr), a chemical element of Group 6 (VIb) of the Periodic Table, is a hard steel that is highly polished and used in alloys to increase strength and corrosion resistance-grey metal. Mainly used as electroplating, tanning, printing, dyeing, medicine, fuel, catalyst, oxidizer, match, and metal corrosion inhibitor. At the same time, metallic chromium has evolved into one of the most important electroplated metals. Nitrate is an inorganic compound consisting of one nitrogen atom (N) and three oxygen atoms (O). The chemical symbol for nitrate is NO3. Nitrate is usually not harmful unless it is reduced to nitrite (NO2).
Nitrate is used as a fertilizer in agriculture due to its high solubility and biodegradability. The main fertilizers are ammonium salt, sodium salt, potassium salt, calcium salt, and magnesium salt.

Chromium (III) Nitrate represents a group of inorganic compounds consisting of chromium, which is chromium nitrate with varying amounts of water. It is not so commercially important and has been found to be applied in the dyeing industry. They are used in academic laboratories to synthesize chromium coordination complexes. Here, in this article, you will learn more about the formula of chromium III nitrate, along with its chemical structure and properties.

The IUPAC name for chromium trinitrate is chromium (3+); trinitrate. Chromium III nitrate, also known as chromium trinitrate, has the chemical formula Cr [(H2O)6] (NO3)3. 3H2O is a water-containing type, and Cr(NO3)3 is an anhydrous type. It briefly describes the complex structure of this inorganic compound.

These types of complex structures are common in hydrated metals such as chromium nitrate III.  This compound is centered around a chromium atom with six aqua (water) -ligand bonds, and the remaining amount of solid is due to 3 nitrate anions and 3 water crystallization molecules. The chemical composition of Chromium Nitrate (III) is as follows, 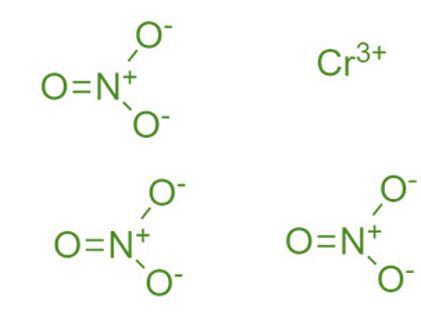 Question 1: What is the molar mass of Chromium III nitrate?

The formula of Chromium III Nitrate is Cr(NO3)3

Question 3: What is chromium nitrate used for?

Chromium nitrate is a light green powder. It is used as a chrome catalyst manufacturing, printing, and corrosion inhibitor.

Question 4: What does III mean in  Chromium (III) Nitrate?

In this case, the name of the compound contains the Roman numeral (III). This means that the metal has an oxidation state of +3. In other words, cations carry a 3+ positive charge, chromium (III) cation.

Question 5: Why is nitric acid a powerful oxidizer?

In the case of nitric acid (HNO3), nitrogen has the highest oxidation state of +5, so it is reduced to oxidize other molecules. Therefore, it acts as an oxidant.

Question 6: Why does nitric acid change the color of the precipitate?

Pure nitric acid is colorless. Nitric acid is so unstable to heat that it decomposes. When they decompose, they form a reddish brown nitrogen dioxide gas. It turns yellow when dissolved in acid.

Question 7: What are the harmful effects of Chromium (III) nitrate?