Chemistry is a branch of science that deals with chemical and their properties. In this article, we are going to learn about chlorine gas. Chlorine is a diatomic element. As you all know chlorine gas is heavier than the air. In total there are seven diatomic elements which are mentioned below, Hydrogen[H2], Nitrogen[N2], Oxygen[O2], Bromine[B2], Iodine[I2], Chloride[Cl2], fluorine[F2].

Take h2 hydrogen gas that’s also a diatomic element like chlorine. We’d get HCL that is hydrochloric acid and it’s a gas probably, balance this equation though because we have one hydrogen and chlorine on the product side but two hydrogens and chlorine on the reactants side.

So, put 2 on the product side to make a balanced chemical equation. The key idea here to remember is if someone reads a word equation it says chlorine gas and there are seven major diatomic elements like hydrogen, nitrogen, fluorine, oxygen, iodine chlorine, and bromine so having no fear of ice-cold beer helps people remember these elements. Note: that when chlorine is with another element it doesn’t have to be two it doesn’t have to be diatomic. When people have one chlorine they could have something like ccl4 carbon tetrachloride where you have four chlorines bonded to something or we just saw with the HCl just one atom it’s when it’s by itself.

The structure of chlorine gas can be represented by two methods. Those methods are: 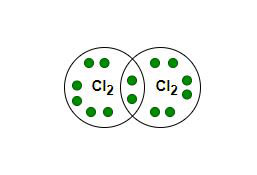 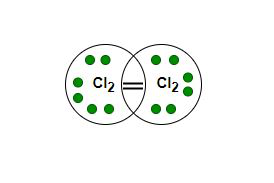 The only difference between these two methods is that the first method has been denoted by dots in the common valence electrons area and in the second diagram it is denoted by a straight line.

Question 1: What are the seven diatomic elements and which of them are heavier than the air?

Question 2: Why is chlorine gas changed in liquid form? How?

Chlorine gas is pressurized and cooled to change into liquid so that it can be shipped and stored. This is why chlorine gas is changed in liquid form.

Question 3: How can we distinguish chlorine gas at different concentrations?

Chlorine gas will exhibit a faint yellowish color at low concentrations and greenish-yellow to green at high concentrations depending on the humidity.

Question 4: What happens when you take to breathe in chlorine gas?

Breathing in the presence of a high level of chlorine gas causes fluid build-up in the lungs. It may lead to dead.

Question 5: Mention any two uses of chlorine gas in industry.

The two industrial uses of chlorine are,

Question 6: What type of poisonous gases and insecticides are prepared by using chlorine gas? What reacts with chlorine.

Chlorine gas is used to prepare insecticides like DDT AND BHC. It also helps to prepare some poisonous gases like tear gas and many more. Many common substances like acetylene, ether, turpentine, ammonia, hydrogen, etc react with chlorine.

Question 7: What sterilizing drinking water will chlorine do?

When the drinking water is sterilized by chlorine gas it purifies the water and kills germs that are harmful to our health. It may lead to severe problems in the human body.