GeeksforGeeks present Maths Chapterwise Formulas for Class 9. This is designed for the convenience of the students so that one can understand all the important concepts of Class 9 Mathematics directly and easily. Math formulae for Class 9 are offered here for students who find the topic of mathematics to be a nightmare and difficult to grasp. They may become hesitant and lose interest in studies as a result of this. As a result, GeeksforGeeks mentioned all of the key formulae for the 9th standard Maths syllabus, which students may simply recall, to assist them in understanding Maths in an easy manner.  For all courses such as Algebra, Geometry, Polynomials, and so on, the formulae are provided here according to the NCERT curriculum.

The numeral or number system is the combination of natural, integers, rational, irrational, and real numbers. This lesson covers the entire concepts of the numeral system and its types, representation on the number line, laws of rational exponents, and integral powers. Any number that can be expressed as p ⁄ q, with p and q being integers and q ≠ 0 being rational numbers. The p ⁄ q form cannot be used to write irrational numbers.

Polynomial is an expression that comprises variables and coefficients which involves the operations like addition, subtraction, multiplication, and non-negative integer exponentiation of variables. A polynomial p(x) denoted for one variable ‘x’ comprises an algebraic expression in the form:

The coordinate geometry is a part of geometry where the position of the points on the plane is described with the help of an ordered pair of numbers called coordinates. 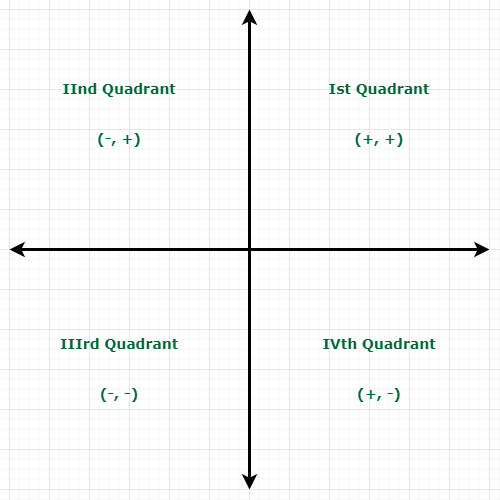 Whenever you have to locate an object on a plane, you need two divide the plane into two perpendicular lines, thereby, making it a Cartesian Plane.

Any equation which can be defined in the form ax + by + c = 0, where a, b and c are real numbers, and a and b are not both zero, is called a linear equation in two variables. Given below are the algebraic identities which are considered very important Maths formulas for Class 9.

Euclidean geometry is the branch of geometry that deals with the study of geometrical shapes and figures based on different axioms and theorems. This study basically provides a brief explanation for flat surfaces.

The important formulas and some note points of Lines and Angles for class 9 notes are provided here. Here the various concepts such as parallel lines, transversal, angles, intersecting lines, interior angles are explained in brief.

A triangle is a three-sided polygon with three edges and three vertices, as described by geometry. The Angle sum property of a triangle is the most significant and widely used characteristic, which states that the sum of a triangle’s interior angles is only 180 degrees. Three sides and three angles make up a triangle, which is a closed geometrical object.

A quadrilateral is a plane geometrical figure which has four sides and has four corners or vertices. Typically, quadrilaterals are rectangle, square, trapezoid, and kite or irregular and uncharacterized figures with four sides. Here are some important properties and short notes about the chapter Quadrilateral:

Chapter 9: Areas of Parallelograms and Triangles

The area of a plane figure is described as the amount of the planar surface covered by a closed geometric figure like rectangle, square, etc. A parallelogram is a type of quadrilateral that contains parallel opposite sides. Below-mentioned are the list of the formula used in the areas of parallelograms and triangles as,

The locus of the points drawn at an equidistant distance from the center is known as a circle. The radius of a circle is the distance between its center and the outside line. The diameter of a circle is the line that divides it into two equal sections and is equal to twice the radius. Therefore in the Class 9 syllabus following important properties and formulas related to circles are discussed:

Chapter 11 of Constructions Class 9 demonstrates how to design various forms with a compass and ruler. This chapter explains how to create the bisector of a given angle, as well as how to make a perpendicular bisector of a given line segment, using construction stages and a clear picture. To get high grades, you should also be able to learn all of the relevant questions in the textbook for Class 9 Maths Chapter 11 construction problems. Following are the different rules to construct important geometrical figures:

Here, l is the length, b is the breadth, h is the height, r is the radius and a is the side of the respective geometrical figure.

Statistics is the study of the representation, collection, interpretation, analysis, presentation, and organization of data. In other words, it is a mathematical way to collect, summarize data. The representation of data differently along with the frequency distribution. Certain facts or figures which can be collected or transformed into some useful purpose are known as data. These data can be graphically represented to increase readability for people. Below mentioned is the brief summary of this chapter: