Ans: Macros are preprocessor directive created using # define that serve as symbolic constants. They are a fragment of code which has been given a name. Whenever the name is used, it is replaced by the contents of the macro. They are created to simplify and reduce the amount of repetitive coding.
For instance,


Defines the macro sum, taking two arguments a and b. This macro may be called like any function. Therefore, after preprocessing:

c. Rewrite the following program after removing any syntactical errors. Underline each correction made. 2


Ans: In the above code, curly bracket after main() is missing, the elements of the array are wrongly declared, variable p is not declared and S can’t be declared inside the block. So, the following corrections are made:

d. Find the output of the following C++ program: 2

e. Find the output of the following : 3

f. Observe the following C++ code and find out, which out of the given options i) to iv) are the expected correct output. Also assign the maximum and minimum value that can be assigned to the variable ‘Go’. 2

Q2 a. Differentiate between data abstraction and data hiding. 2
Ans: Data hiding can be defined as the mechanism of hiding the data of a class from the outside world. This is done to protect the data from any accidental or intentional access. Data hiding is achieved by making the members of the class private.
Data abstraction refers to, providing only essential information to the outside world and hiding their background details. Members defined with a public label are accessible to all parts of the program. The data abstraction view of a type is defined by its public members.

b. Answer the questions (i) and (ii) after going through the following class : 2

(ii) What is Function 3 called? When will it be invoked?
Ans: Function 3 is a Destructor which is invoked when the object goes out of scope.

c. Define a class Candidate in C++ with the following specification : 4
Private Members :


d. Give the following class definition answer the question that is follows: 4


i) Name the base class and derived class of college. 1
Ans:
Base class: University
Derived class: Department

iii) What type of inheritance is depicted in the above class definition?
Ans: Multilevel Inheritance

iv) What will be the size of an object (in bytes) of class Department?
Ans: 85 bytes

b. Write the definition of functions for the linked implemented queue containing passenger information as follows: 4


c. Write a function to sort any array of n elements using insertion sort. Array should be passed as argument to the function. 3 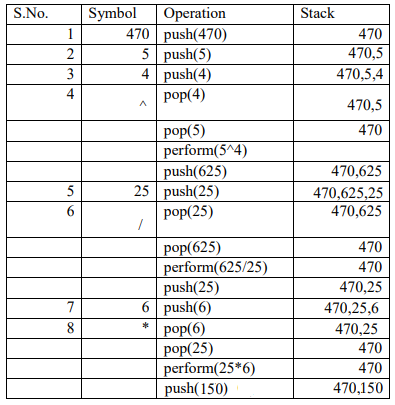 i) Write statement to position the file pointer to the end of the file
Ans: F.seekg(0, ios::end);

ii) Write statement to return the number of bytes from the beginning of the file to the current position of the file pointer.
Ans: F.tellg();

b. Write a function RevText() to read a text file " Input.txt " and Print only word starting with ‘I’ in reverse order . 2
Example: If value in text file is: INDIA IS MY COUNTRY
Output will be: AIDNI SI MY COUNTRY
Ans:


c. Write a function in C++ to search and display details, whose destination is "Chandigarh" from binary file "Flight.Dat". Assuming the binary file is containing the objects of the following class: 3

Similarity: Both List and Dictionary are mutable datatypes.
Dissimilarity: List is a sequential data type i.e. they are indexed.
Dictionary is a mapping datatype. It consists of key: value pair.
Eg: L =[1, 2, 3, 4, 5] is a list
D= {1:"Ajay", 2:"Prashant, 4:"Himani"} is a dictionary where 1, 2, 4 are keys and "Ajay", Prashant, "Himani" are their corresponding values.

b. Observe the following Python functions and write the name(s) of the module(s) to which they belong: 1
i) uniform() ii) findall()

c. Rewrite the following Python program after removing all the syntactical errors (if any), underlining each correction: 2

d. Find the output of the following Python program: 3

e. Find the output of the following program 2

f. Observe the following Python code and find out, which out of the given options i) to iv) are the expected correct output(s). Also assign the maximum and minimum value that can be assigned to the variable ‘Go’. 2

Q2 a. Discuss the strategies employed by python for memory allocation? 2

b. Answer the questions (i) and (ii) after going through the following class definition: 2

i. Explain relevance of Function 1.

Ans: __init__ function is used to initialize the members of a class. It is automatically invoked when the object of the class is created.

ii (a). Fill in the blanks with a statement to create object of the class TOY.

(b). Write statement to check whether tprice is an attribute of class TOY.

c. Define a class Train in PYTHON with following description: 4

Public Members:
• A constructor to initialize the data members.
• A function InputData() to allow the user to enter the values
• A function displaydata() to display all and call getdata function


d. Observe the following class definition and answer the question that follow: 2


i. Explain the relevance of Line1..

ii. What type of inheritance is being demonstrated in the above code?

e. Write a user defined function findname(name) where name is an argument in Python to delete phone number from a dictionary phonebook on the basis of the name, where name is the key.


Q3 a. Explain try..except…else … with the help of user defined function def divide(x, y) which raises an error when the denominator is zero while dividing x by y and displays the quotient otherwise. 3


In the above example: try block consists of code that can raise an error. When y(denominator) gets a 0 value, ZeroDivisionError is raised which is handled by except clause. In case of no exception else statement is executed. In case there is no error the statement(s) in else clause are executed


The class book is implemented using Queue. Keeping the same in mind, complete the function definitions for adding a book addbook() and deleting a book removebook().


e. Evaluate the following postfix using stack & show the content of the stack after the execution of each:        2 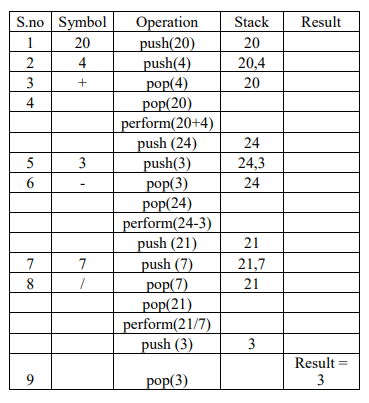 Q4 a. Consider the following code: 1


Explain statement 1 and give output of 2.

Ans: Statement 1 uses seek()method can be used to position the file object at a particular place in the file. It's syntax is :fileobject.seek(offset [, from_what]). So, f.seek(-3, 2) positions the fileobject to 3 bytes before the end of the file.

Output of 2 is: de (It reads 2 bytes from where the file object is placed.)

b. Write a user defined function in Python that displays the number of lines starting with ‘H’ in the file Para.txt.Eg: if the file contains: 2

Whose woods these are I think I know.
His house is in the village though;
He will not see me stopping here
To watch his woods fill up with snow.
Then the line count should be 2.


c. Consider a binary file Employee.dat containing details such as empno: ename: salary (separator ‘ :’). Write a python function to display details of those employees who are earning between 20000 and 40000.(both values inclusive) 3

Q5 a. Differentiate between cardinality and degree of a table with the help of an example. 2

b) Consider the following tables FACULTY and COURSES. Write SQL commands for the statements (i) to (v) and give outputs for SQL queries (vi) to (vii) 6 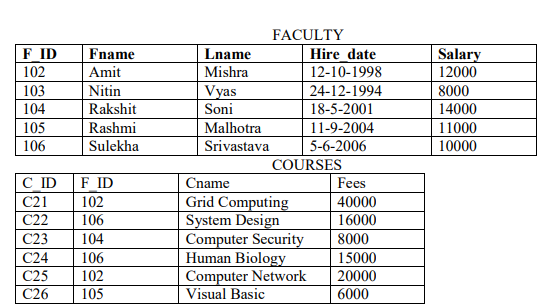 i) To display details of those Faculties whose salary is greater than 12000.

iii) To increase the fees of all courses by 500 of "System Design" Course.
Ans:

iv) To display details of those courses which are taught by ‘Sulekha’ in descending order ofcourses.

b. Draw a logic circuit for the following Boolean expression: A.B+C.D’. 2

Q7 a. Write any 1 advantage and 1 disadvantage of Bus topology. 1

Ans:
Advantage: Since there is a single common data path connecting all the nodes, the bus topology uses a very short cable length which considerably reduces the installation cost.
Disadvantage: Fault detection and isolation is difficult. This is because control of the network is not centralized in any particular node. If a node is faulty on the bus, detection of fault may have to be performed at many points on the network. The faulty node has then to be rectified at that connection point.

b. SunRise Pvt. Ltd. is setting up the network in the Ahmadabad. There are four departments named as MrktDept, FunDept, LegalDept, SalesDept. 4

Distance between various buildings is given as follows:

Number of Computers in the buildings:

i) Suggest a cable layout of connections between the Departments and specify topology. 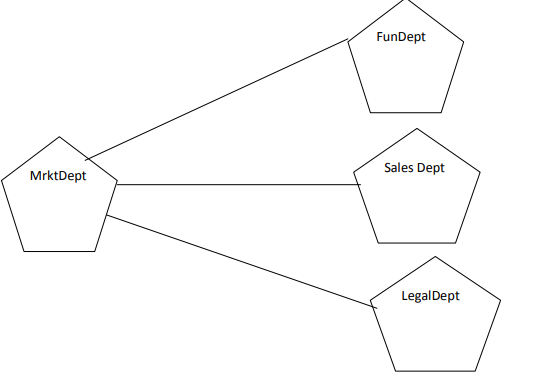 ii) Suggest the most suitable building to place the server with a suitable reason.
Ans: As per 80 – 20 rule, MrktDept because it has maximum no. of computers.

iii) Suggest the placement of i) modem ii) Hub /Switch in the network.

Ans: Each building should have a hub/switch and Modem in case Internet connection is required

iv) The organization is planning to link its sale counter situated in various part of the same city/ which type of network out of LAN, WAN, MAN will be formed??Justify.

Ans: VOIP (Voice Over Internet Protocol), is used for the transmission of voice traffic over Internet-based networks.

ii. Used for chatting between 2 groups or between 2 individuals.

Ans: Internet Relay Chat is an open protocol that allows users to chat with each other online. It operates on a client/server model.

d. What is an IP Address? 1
Ans: Internet Protocol (IP) Address is an address that uniquely identifies a device on the Internet. It allows a system to be recognized by other systems that are present on the world wide web. There are two primary types of IP address formats used — IPv4 and IPv6. Data transmission and routing over the internet requires the IP address of both the sender and receiver computer.

Ans: Hyper Text Transfer Protocol(HTTP) is an application-level protocol used to transfer data like text, graphic, images, sound, video, and other multimedia files over the web. HTTP is a part of the Internet protocol suite and uses a server-client paradigm for transmitting data.

Ans: Cookies are small text files stored in the user's browser directory or data folder to retain the browsing information of a user like the login credentials, browsed web pages to identify customers and customize their browsing experience. The main purpose of a cookie is to identify users and possibly prepare customized Web pages or to save site login information for the user.

Ans: 3G stands for 3rd Generation and 4G is the 4th Generation of mobile broadband internet. The basic difference between the 3G and the 4G is the speed of transmission of mobile data. The average 3G speed is considered to be 3 MBps while in 4G, it is upto 15 MBps in India.