Many machine learning algorithms require data to be numeric. So, before training a model, we need to convert categorical data into numeric form. There are various categorical encoding methods available. Catboost is one of them. Catboost is a target-based categorical encoder. It is a supervised encoder that encodes categorical columns according to the target value. It supports binomial and continuous targets.

Target encoding is a popular technique used for categorical encoding. It replaces a categorical feature with average value of target corresponding to that category in training dataset combined with the target probability over the entire dataset. But this introduces a target leakage since the target is used to predict the target. Such models tend to be overfitted and don’t generalize well in unseen circumstances.

A CatBoost encoder is similar to target encoding, but also involves an ordering principle in order to overcome this problem of target leakage. It uses the principle similar to the time series data validation. The values of target statistic rely on the observed history, i.e, target probability for the current feature is calculated only from the rows (observations) before it.

TargetCount:  Sum of the target value for that particular categorical feature (upto the current one).

Prior: It is a constant value determined by (sum of target values in the whole dataset)/(total number of observations (i.e. rows) in the dataset)

With this approach, the first few observations in the dataset always have target statistics with much higher variance than the successive ones. To reduce this effect, many random permutations of the same data are used to calculate target statistics and the final encoding is calculated by averaging across these permutations. So, if the number of permutations is large enough, the final encoded values obey the following equation:

TargetCount: Sum of the target value for that particular categorical feature in the whole dataset.

Prior: It is a constant value determined by (sum of target values in the whole dataset)/(total number of observations (i.e. rows) in the dataset)

FeatureCount: Total number of categorical features observed in the whole dataset with the same value as the current one.

For Example, if we have categorical feature column with values

The encoder is available as CatBoostEncoder in categorical-encodings library. This encoder works similar to scikit-learn transformers with .fit_transform(), .fit() and .transform() methods. 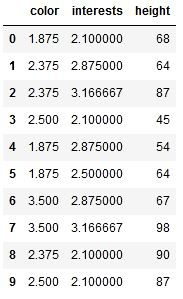