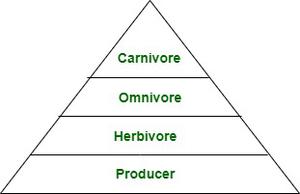 Carnivores are heterotrophs that eat the meat or flesh of other animals. They belong to the class of secondary consumers. There are some carnivores that hunt other animals known as prey. They have long and sharp teeth so that they can tear the flesh easily.  They also have good eyesight so that they can target their prey easily. Some have good swimming capabilities with a thin, flexible bodies. There are different types of Carnivores:

Carnivorous plants are known as insectivorous plants. They feed on small animals and other insects by means of traps. They use a trapping mechanism in which they keep a modified leaf to attract insects. On the leaf, there is a sticky thing so that once an insect walks on the leaf, it gets caught in the sticky substance. After that, they use rapid leaf movements to actively capture the insects. The enzymes and other bacteria help in the digestion of the food. They also generate some of their energy from photosynthesis. Example: Venus Flytrap, Pitcher plant, etc.

Carnivores as part of the food web

In an ecosystem, there is a concept of a Food chain. A food chain shows how the energy is transferred from one organism to another, and the food web comprises the food chain in a single ecosystem.  They are at the third trophic level of the food web. They rely on other carnivores, omnivores, and herbivores. In the food chain, only 10% of energy is transferred to the next level. So carnivores are present at the third level of the food chain, and they receive very less energy. But it is important that the population of autotrophs, consumers, and decomposers is maintained. For instance, if carnivores become extinct the population of herbivores will increase and the producers might get extinct as well due to excessive consumption. They help to keep ecosystems balanced.

Many carnivorous animals are endangered, and some have become extinct due to excessive hunting by humans. They are mostly hunted for their fur, and teeth. Also, habitat loss and extinction of prey have also caused an imbalance in the carnivore’s population. To save them, some rules have been set up:

Question 1: Carnivorous birds do not have teeth, yet feed on rats. How is it possible?

Birds do not have teeth. They rely on their strong beaks. They have strong hooked beaks. Some have spear-shaped beaks so that they can catch fish easily.

Shark’s teeth are usually jagged. The teeth are capable of slicing, grinding, and crushing. Some sharks feed on oysters, and they use their teeth to crush the hard calcium shell. Sharks’ teeth grow even if they break.

Question 3: Who is the largest land carnivore. Explain their qualities.

Polar bears are the largest land carnivores. They exclusively feed on meat, as they eat seals. They have a thick layer of fur that helps them to survive in the coldest conditions.

Question 4: What type of teeth is present in carnivores?

The teeth are mostly sharp in carnivores. It mostly comprises incisors and canines. A canine teeth can be easily identified, as they are a longer, pointed teeth.

Venus fly traps are carnivorous plants that feed on insects. These plants catch them very fast and move very slowly. They have special enzymes that are not present in ordinary plants. These enzymes help in the digestion of such insects.

Question 6: What is the meaning of carnivores and how many species are there?

Carnivores are derived from the Latin word Carnivora. It means flesh-eating animals, There are approximately more than 270 species of carnivores, and they include mammals, reptiles, fish, etc.