The basic function of the heart is to circulate blood throughout the body in a cycle. The human heart beats 100,000 times every day. The cardiovascular system, which consists of the heart, arteries, veins, and blood capillaries, is responsible for the transfer of many chemicals in humans and includes systemic and pulmonary circulation. The valves of the heart regulate blood flow, resulting in organized blood propulsion to the next chamber. The cardiac cycle is a sequence of heart contractions that pressurize different chambers of the heart, causing blood to flow in only one direction. To have a better grasp of the cardiac cycle, meaning, length, and stages, continue reading.

“The cardiac cycle is the series of events that occur as the heart beats.”

The sequence of events that occur throughout a heartbeat is known as the cardiac cycle. Automaticity and rhythmicity are features of the (Sinoatrial) SA node. As a result, action potentials are generated in the atrial and ventricular muscle fibers. Depolarization and repolarization occur as a result. Following then, the heart goes through a series of modifications that are repeated from beat to beat.

The cardiac muscle cells, or cardiomyocytes, that comprise the heart muscle are in charge of pumping blood. Cardiomyocytes are distinct muscle cells that are striated like skeletal muscle yet pump involuntarily and rhythmically like a smooth muscle.

During each cardiac cycle, the heart contracts (systole), pushing blood out and pumping it around the body; this is followed by a relaxation phase (diastole), during which the heart fills with blood—at the same time, the atria contract, pumping blood into the ventricles through the atrioventricular valves. As the atrioventricular valves shut, a monosyllabic “lub” sound is created. After a small delay, the ventricles contract at the same time, pushing blood via the semilunar valves into the aorta and the artery supplying blood to the lungs.

Physiology of the Cardiac Cycle

The human heart has four chambers, divided into left and right halves. The two top chambers are the left and right atria, while the lower two chambers are the right and left ventricles. The right ventricle’s primary purpose is to transport deoxygenated blood to the lungs through the pulmonary arteries and trunk. The left ventricle is in charge of pumping freshly oxygenated blood to the body via the aorta.

Phases of the Cardiac Cycle 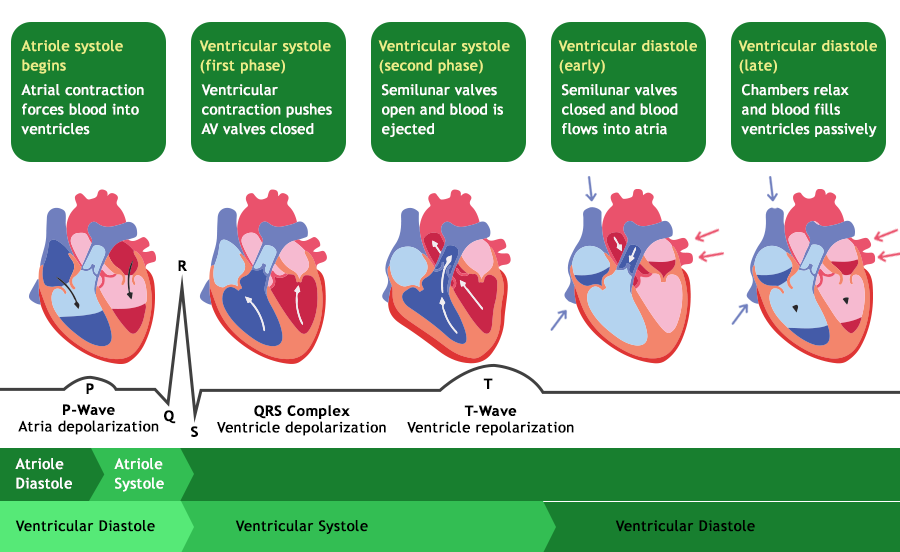 The cardiac cycle events outlined here track the route of blood from the time it enters the heart to the time it is pumped out of the heart and into the rest of the body. Systole refers to contraction and pumping, whereas diastole refers to relaxation and filling. The atria and ventricles of the heart both go through diastole and systole phases, which occur concurrently.

At this moment, oxygen-depleted blood is also pushed from the right ventricle to the pulmonary artery. Through systemic circulation, the aorta extends out to give oxygenated blood to all regions of the body. De-oxygenated blood returns to the heart via the venae cavae after its journey through the body.

The atria and cardiac ventricles are relaxed during ventricular diastole, and the atrioventricular valves are open. Following the final cardiac cycle, oxygen-depleted blood returns to the heart via the superior and inferior vena cavae and travels to the right atrium.

The right ventricle, which is filled with blood from the right atrium, gets impulses from fibre branches (Purkinje fibres) transmitting electrical impulses that force it to contract at the start of the ventricular systole period. The atrioventricular valves close and the semilunar valves (pulmonary and aortic valves) open as a result.

Duration of the Cardiac Cycle

A normal person’s heartbeat is 72 beats per minute. As a result, the length of one cardiac cycle may be estimated as follows:

Each cardiac cycle will last 0.8 seconds at a heart rate of 72 beats per minute.

The following table shows the duration of the various phases of the cardiac cycle:

The following are the various stages of a cardiac cycle:

Question 1: What happens during the cardiac cycle’s diastole phase?

Question 2: What is the cardiac cycle’s second to final phase?

Question 3: When the heart rate is 75 beats per minute, what is the cardiac cycle?

When the heart rate is 75 beats per minute, the cardiac cycle lasts 0.8 seconds. The cardiac cycle events are as follows: The atrial systole lasts 0.1 seconds, during which the atria contract and the ventricles relax. Depolarization of the SA node results in atrial depolarization, which is shown by a P wave on the ECG.

Question 4: What exactly is the cardiac cycle?

Question 5: What happens to the blood throughout the course of a cardiac cycle?

The atria and ventricles contract and relax during each cardiac cycle. This alternating contraction and relaxation cause the blood to flow from high-pressure locations to low-pressure areas.