Carbonous acid is also known as Formic acid. It’s naturally present in the bees and ants. It is the strongest carboxylic acid. It has a pungent odor. It is used as a preservative due to its low toxicity. It is a colorless fuming liquid. It has a density of 1.2126 g/ml. It has the reducing properties of aldehydes. It is low toxicity and even at lower concentrations, it’s much more effective. Its chemical formula is CH2O2.

CH2O2 is the chemical name of Carbonous acid. It has a molar mass of 46.025 g/mol. It has a boiling point of 100.8˚C. It additionally utilizes it in place of mineral acids. 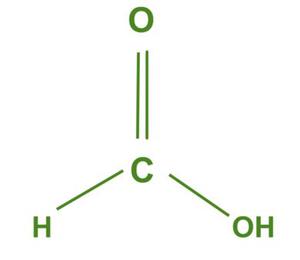 Wood ants battle microbes by incorporating tree resin with antimicrobial properties into their nests. They also produce huge amounts of formic acid in their toxic gland, which they promptly spray to shield or sanitize their nest.

Question 2: What type of compound is HCO2H?

Carboxylic acid, Formic Acid (also known as methanoic acid) is the simplest carboxylic acid. Its formula is HCOOH. It is a significant intermediate in chemical synthesis and occurs naturally, mostly in ant and bee venom.

Formic acid, In Latin, the name of an ant is called Formica. Thus, the acid that presents in the body is called formic acid. According to IUPAC nomenclature, formic acid is also known as Methanoic acid.

Question 5: Why is carbon monoxide more poisonous than carbon dioxide?

Carbon monoxide (CO) is viewed as more harmful or unsafe than Carbon Dioxide (CO2) because of the way that CO responds with the hemoglobin in our circulation systems and produces a steady compound that really keeps oxygen from entering the body.

Question 6: What are the uses of Carbonous acid?

Question 7: Why is CO called the silent killer?

It is known as the “silent killer” since it is colorless, odorless, tasteless, and non-disturbing. On the off chance that the early indications of CO poisoning are disregarded, an individual might pass out and not be able to get away from the risk. A greater number of individuals die from carbon monoxide openness than some other sort of poising.