Calcium (Ca) is a substance that is important for living creatures, including people. It is the most plentiful mineral in the body and fundamental for good wellbeing. We want to consume a specific measure of calcium to assemble and keep up with solid bones and sound correspondence between the mind and different pieces of the body.

Br is the chemical name of Bromine and is essential for the halogen of the periodic table. The bromine substance Br2 is a rosy earthy colored fluid and is never normally found in its basic structure yet rather in inorganic mixtures, otherwise called bromides, and in regular organo-bromine compounds. These are normally found in soils, salts, air, and seawater.

Calcium Bromide is otherwise called Calcium Dibromide. Calcium Bromide is having one calcium particle and two bromine molecules. In its anhydrous structure, it is hygroscopic and dismal gems sharp saline taste. It is a compound known for being utilized in a few boring liquids and food additives. Calcium Dibromide is non-harming to any arrangement. It is synthetically as well as thermally steady. Different arrangements containing chlorides and bromides can be mixed with this compound.

It is created by responding calcium carbonate CaCO3 and calcium oxide with hydrobromic corrosive for example HBr. Calcium bromide isn’t found in nature.

The Chemical formula of the Calcium Bromide is CaBr2. This compound is ordinarily found as a hydrated salt with two atoms of water and can likewise be found as a hexahydrate salt. It is framed by one cation Ca2+ and two anions Br–. Its design is an octahedron with Ca focuses bound to an aggregate of six anion Br– through ionic bonds. 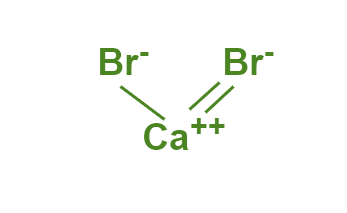 Calcium bromide is made from the reaction of calcium oxide with hydrobromic acid. In another manner, we can set it up with the response of metallic calcium and basic bromine:

Question 1: What are the serious health hazards of Calcium Bromide?

Calcium bromide can irritate eyes, redness of eyes, skin and mucous as well. It is extremely poisonous by ingestion, causing sore throat and nausea. Inhalation of calcium bromide causes cough. It isn’t burnable or combustible.

Question 2: What is the molar mass of calcium Bromide?

Its molar mass is,

Thus the molar mass of Calcium Bromide is 199.89 gram per mole.

Question 3: Why is calcium bromide ionic?

Calcium bromide is made out of metallic calcium and nonmetallic bromine. Metals will quite often shape captions while nonmetals structure anions. Hence, calcium tends to shape a cation, while bromine frames an anion. Together, they structure an ionic compound.

Question 4: Where is calcium bromide found?

This compound is generally found as a hydrated salt with two atoms of water and can likewise be found as a hexahydrate salt.It is formed by one cation Ca2+ and two anions Br–. Its design is an octahedron with Ca focuses bound to an aggregate of six anion Br–  through ionic bonds.

Question 5: What does calcium bromide react with

At the point when firmly heated in air, calcium bromide will respond with oxygen to create calcium oxide and bromine:

Question 6: What type of component is calcium bromide?