Byte Objects vs String in Python

In Python 2, both str and bytes are the same typeByte objects whereas in Python 3 Byte objects, defined in Python 3 are “sequence of bytes” and similar to “unicode” objects from Python 2. However, there are many differences in strings and Byte objects. Some of them are depicted below:
` 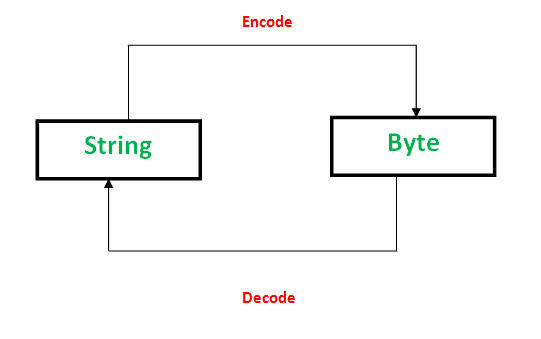 There are methods to convert a byte object to String and String to byte objects.

PNG, JPEG, MP3, WAV, ASCII, UTF-8 etc are different forms of encodings. An encoding is a format to represent audio, images, text, etc in bytes. Converting Strings to byte objects is termed as encoding. This is necessary so that the text can be stored on disk using mapping using ASCII or UTF-8 encoding techniques.
This task is achieved using encode(). It take encoding technique as argument. Default technique is “UTF-8” technique.

Similarly, Decoding is process to convert a Byte object to String. It is implemented using decode() . A byte string can be decoded back into a character string, if you know which encoding was used to encode it. Encoding and Decoding are inverse processes.

This article is contributed by Manjeet Singh. If you like GeeksforGeeks and would like to contribute, you can also write an article using write.geeksforgeeks.org or mail your article to review-team@geeksforgeeks.org. See your article appearing on the GeeksforGeeks main page and help other Geeks.
Please write comments if you find anything incorrect, or you want to share more information about the topic discussed above.