Box Plot: It is a type of chart that depicts a group of numerical data through their quartiles. It is a simple way to visualize the shape of our data. It makes comparing characteristics of data between categories very easy.

In this article, we are going to discuss the following topics-

1) Understanding the components of a box plot

Note: The box plot shown in the above diagram is a perfect plot with no skewness. The plots can have skewness and the median might not be at the center of the box.

The area inside the box (50% of the data) is known as the Inter Quartile Range. The IQR is calculated as –

The values below and above these limits are considered outliers and the minimum and maximum values are calculated from the points which lie under the lower and upper limit.

2) How to create a box plot

Let us take a sample data to understand how to create a box plot.

To draw a box plot for the given data first we need to arrange the data in ascending order and then find the minimum, first quartile, median, third quartile and the maximum.

To find the First Quartile we take the first six values and find their median.

For the Third Quartile, we take the next six and find their median.

Note: If the total number of values is odd then we exclude the Median while calculating Q1 and Q3. Here since there were two central values we included them.

Now, we need to calculate the Inter Quartile Range.

We can now calculate the Upper and Lower Limits to find the minimum and maximum values and also the outliers if any.

The outliers which are outside this range are –

Now we have all the information, so we can draw the box plot which is as below-

We can see from the diagram that the Median is not exactly at the centre of the box and one whisker is longer than the other. We also have one Outlier. 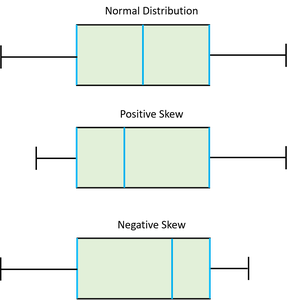 4) How to compare box plots

As we have discussed at the beginning of the article that box plots make comparing characteristics of data between categories very easy. Let us have a look at how we can compare different box plots and derive statistical conclusions from them.

Let us take the below two plots as an example:- 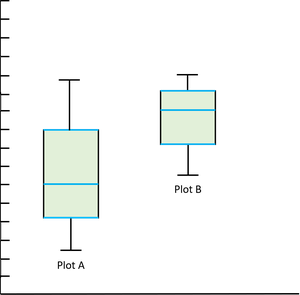 This is all for Box Plots. Now you might have got the idea of Box Plots how to make them and how to derive information from them. For any queries do leave a comment down below.