Barium Oxide is a remarkable (synthetic) chemical compound suitable for optic and ceramic applications. It draws in water atoms from the general climate at room temperature. This is broadly utilized in covering hot cathodes in cathode beam tubes, creating optical crown glass, and more. It is additionally utilized as a drying specialist for gas and solvents. This compound shows up from white tone to yellow tone. When it reacts with water it forms barium hydroxide. It doesn’t conduct electricity like other oxide compounds. It has a density of 5.72g/ml and it’s a non-flammable compound.

Barium is an alkaline metal, chemical element- Ba and nuclear number 56. It is the fifth element in the group 2 periodic table. In light of its high substance reactivity, barium is never found in nature as a free component. The most widely recognized minerals of barium are barite and witherite.

Oxygen comprises around 21% of climatic gases and is extremely receptive. All components on earth respond with oxygen to form oxygen-containing compounds. The oxygen compounds, paired mixtures of oxygen with lesser electronegative components are called oxides. Examples of oxides include Na2O, CaO, Al2O3, CO2, N2O3, Cl2O, and XeO2. An oxide is a category of chemical compound that has one or more oxygen atoms as well as another element in its composition such as Li2O, CO2, H2O, etc.

The chemical formula of barium oxide is BaO. Its molar mass is 153.33 g/mol and its density is 5.72 g/cm3. It is a cubic structure. BaO is formed by the oxidization of Barium salts and barium carbonate. Barium consumes oxygen to create Barium oxide. (One ion of barium neutralizes one ion of oxygen, these two ions combine to form barium oxide, BaO.) 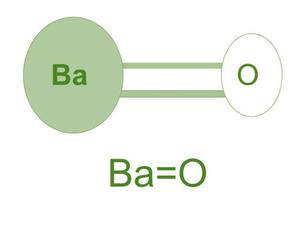 Question 1: What are the Safety issues for Barium Oxide?

In the event that if it contacts the skin or the eyes or is breathed in it causes torment and redness. it is more perilous when ingested. It can cause queasiness and looseness of the bowels, muscle loss of motion, cardiovascular arrhythmia, and can cause death. Whenever ingested, clinical consideration ought to be looked for right away.

Question 2: For what reason do we treat tungsten cathodes with barium oxide in sodium vapor lamps?

The work capacity of tungsten is diminished when barium oxide is stored on the wire filament. To put it another way, tungsten discharges electrons all the more effectively and works all the more proficiently.

Question 3: How to prepare BaO?

In next, barium oxide by heating barium carbonate:

Question 4: In the preparation of barium oxide by thermal decomposition of barium carbonate, how carbon is added to the reaction mixture?

Barium carbonate due to very high lattice energy decomposes at about 1400˚C.

At such high temperature, the reaction tends to become reversible. Carbon added combines with CO2 forming CO and thus reaction is made irreversible,

Question 5: What are the uses of BaO?

Barium oxide is used in the process of isomer separation. It is used as absorbent in many chemical reactions.
It is used in production of optical crown glass. Utilized in the response of ethylene oxide and alcohols as an ethoxylation catalyst, which happens somewhere in the range of 150˚C and 200˚C.

Question 6: What is a barium swallow test?

Barium is utilized during a gulping test to make specific region of the body appear all the more plainly on a X-beam. The radiologist will actually want to see size and state of the pharynx and throat. The person will likewise be capable perceive the way that you swallow. These subtleties probably won’t be seen on a standard X-beam. Barium is utilized distinctly for imaging tests for the GI tract.

Question 7: What is Barium enema?

A barium enema is a X-beam test that can recognize changes or anomalies in the digestive organ (colon). The system is additionally called a colon X-ray.
A purification is the infusion of a fluid into your rectum through a small tube. For this situation, the fluid contains a metallic substance (barium) that covers the coating of the colon. Regularly, a X-beam creates an unfortunate picture of delicate tissues, however the barium covering brings about a generally clear outline of the colon.