Barium, abbreviated as ‘Ba,’ is a group 2 element with atomic number 56 in the periodic chart.
Barium is a dense alkaline earth metal found in ore deposits and accounts for 0.05 percent of the Earth’s crust. Barium and its derivatives can be found in nature or manufactured for a variety of applications.
It is a silvery-white metal that occurs naturally in the environment. It can be found in mixtures with other compounds like carbon, oxygen, and sulfur. It is extremely light, with a density half that of iron.

In the presence of oxygen, barium oxidizes and forms the hydroxide, which releases hydrogen. It interacts with practically all non-metals, creating poisonous chemicals in the process.

A bromine compound containing another element or group, such as a salt having the anion Br– or an organic molecule containing bromine linked to an alkyl radical.

Barium bromide (abbreviated as BaBr2) is a significant chemical compound. It’s also known as barium (2+) dibromide or anhydrous barium bromide. It appears as a white solid that is water-soluble but poisonous in its watery state.

Barium (2+) dibromide crystallizes as white, deliquescent orthorhombic crystals with lead chloride patterns. It behaves like a simple salt when dissolved in water. It forms barium sulfate (BaSO4) precipitates when it combines with the sulfate ion of sulfuric acid (H2SO4). 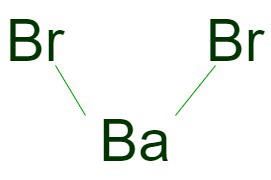 How Barium bromide is produced?

Barium bromide can be made from barium carbonate or barium sulfide by reacting it with hydrobromic acid (HBr) to make hydrated barium bromide. The following is the reaction:

Barium bromide (BaBr2) has a variety of applications

When barium bromide is eaten and absorbed into the body, it can cause serious poisoning.

Bromine is a powerful oxidizer. It can release the free oxygen radicals that are present in mucous membranes from the water. The liberated free radicals can behave as powerful oxidizers, causing tissue damage.

Because barium is an alkaline metal, it produces a lot of Ba2+ ions. It is similar to the halogen bromine, which is used to make Br. Bromine generates a salt when it reacts with the element Barium. As a result, this barium salt is deemed neutral. As a result, it has neither acidic nor basic properties. Finally, BaBr2 is formed.

Question 2: What is the type of bond that barium bromide has?

Question 3: Is it true that barium bromide dissolves in water?

A polar compound is barium bromide. It is poisonous and readily dissolves in water. Water dissociates it into the ions Ba2+ and Br–.

Question 4: What is the chemical formula for barium bromide?

Question 5: What is the chemical state of barium bromide?

Barium bromide is a crystalline white substance that is water-soluble.

Question 6: What is the purpose of barium bromide?

To purify radium, barium bromide was employed in a method known as fractional crystallization. It’s now utilized as a chemical precursor, in photography, and in the production of other bromides.

Question 7: Is it possible for Barium Bromide to kill you?

Barium is a highly poisonous metal found in nature. As a result, it is harmful to your health, but if you add a very small amount to your food, it will not harm you. When barium and bromine mix, a salt is formed. Because salt has neutral qualities, Barium Bromide is not toxic to humans and is only present in trace amounts.