Bar Magnet as an Equivalent Solenoid

A permanent magnet is a bar magnet, but an electromagnet is a solenoid that operates as a magnet only when an electric current is supplied through it. When a bar magnet is split in half, both parts behave like magnets with the same magnetic characteristics, however, when a solenoid is sliced in half, the magnetic fields are weaker.

Magnetism is the property of a matter to get attracted or repelled from other matter. This property depends on the movement of electric charges.

Actually, electricity and magnetism are interrelated to each other. That’s why the branch of physics which studies the electric and magnetic fields together is known as electromagnetism. Every substance has a number of atoms inside and many numbers of electrons. But initially, it is electrically neutral. When it gets charged it generates an electric field and corresponding magnetic field.

Types of magnetism present are:

Magnet is a material present in this world that gets attracted or repelled by other objects and it produces a magnetic field around it. There are two poles in magnet: North pole and South pole

There are basically two types of magnets:

As matter can be present in any state so magnet can also be in different state. e.g.

A bar magnet is a cuboidal-shaped object which is made up of certain ferromagnetic materials. It has two poles in it one is the north pole and another is the south pole.

Materials used in making Bar magnets are iron, nickel, cobalt, or any other ferromagnetic materials. There are two poles in Bar magnet: The North pole and the South pole.

Pole strength of the magnet is given by,

Example 1: If the work done by the magnet to move around the wire is 30 J and the current flowing through the wire is 15 A. Find the pole strength.

We know that formula of pole strength is,

The solenoid is a device that is made using a wire which is twisted around to make a coil of a certain number of rounds.

When an electric current is flown through a solenoid it acts as a magnet and generates a magnetic field around it and acquires magnetic property but as soon as electricity stops it loses its magnetic property. So, it is an example of a temporary magnet. 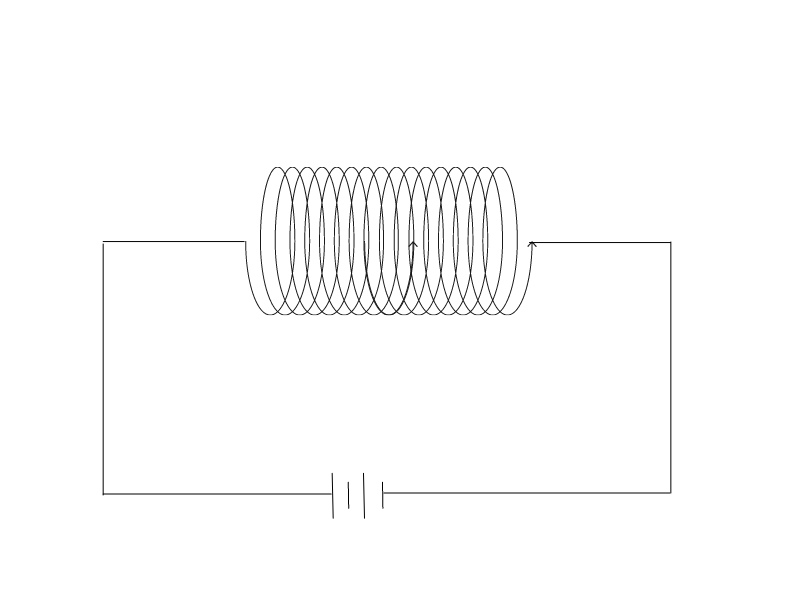 Formula for Magnetic field of a Solenoid-

The magnetic field of a solenoid is given by,

The S.I. unit of magnetic fields is Tesla.

Example 2: Find the Magnetic field of solenoid if number of turns in coil is 200 current flowing is 1000 A and length of solenoid is 3.14 m.

Properties of a Solenoid:

Uses of a Solenoid:

Magnet is a material present in this world which gets attracted or repelled by other objects and it produces a magnetic field around it. There are two poles in magnet : North pole and South pole.

Magnetism is property of a matter to get attracted or repelled from other matter. This property depends on movement of electric charges.

Question 2: If a magnet with a pole strength of 5 is bought near a current carrying conductor with current 20 A. Find the work done in doing so.

Two bar magnets can be placed in four different positions:

Their behaviour are as follows:

Question 4: Find the magnetic flux of a disk of area 20 m2 having 5 as magnetic field. Given angle between area vector of disk and direction of magnetic field is 60o.

The formulae for magnetic field is , φ = B A cosθ

So, the magnetic flux of given disk is 50 Maxwell.

Uses of bar magnet are as follows: