Balance of Payments: Surplus and Deficit, Autonomous and Accommodating Transactions, Errors and Omissions

A balance of payment (BoP) is a summary statement that lists all of the transactions that took place within a specific period between the resident and the outside world. The Balance of Payment indicates the extent to which a country saves enough money to cover its imports. It also reveals whether the country produces adequate economic output to fund its expansion. Usually, BoP is in equilibrium, which means that all the debit items are equal to the credit items. In equilibrium, the total of current and capital accounts are equal to 0, as they balance each other out.

Balance of Payments: Surplus and Deficit

In reality, international payments are similar to that of individuals who spend more than they earn and finance the gap by borrowing money or selling assets. A country can sell assets or borrow money from overseas to cover a gap in its current account (spending more than it brings in from sales to the outside world). Therefore, any current account shortfall must be covered by a capital account surplus or net inflow of capital into the country.

It is a favourable situation when the country’s export is more than its import. The country can create more capital to pay for its domestic productions. An increase in the level of production will ultimately help in the short-term growth of a country. Under this:

Balance is in surplus when:

It is an unfavourable situation when the country’s import is more than its export of goods and services. It means that a country is spending money more than it earns. In this case, it has to borrow to pay for its imports. Thus, it creates a problem for the economy. Under this:

Balance is in deficit when:

In the case of BoP Deficit, it must be noted that: 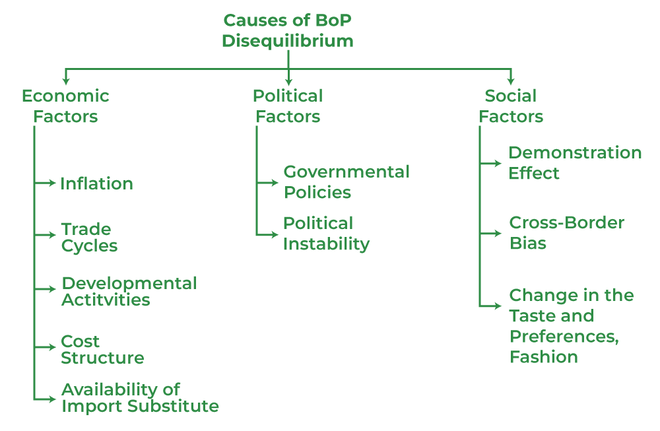 (i) Inflation: Generally, the country’s price and cost structure affect the volume of exports and the BoP position. Inflation means a persistent rise in the price of goods and services over a period of time. This increases the cost of living. For example, in the 90s, a movie ticket cost around ₹20, but now the average price is ₹200, thus, it shows a continuous increase in the price. In the context of BoP, it increases the price, due to higher salaries, and higher prices for raw materials, which makes export expensive and imports cheaper; eventually resulting in a BoP deficit.

(ii) Trade Cycles: There are four phases in the business/ trade cycle, i.e., Boom, Recession, Depression, and Recovery. Boom and Recovery bring positive changes in the economy; in terms of an increase in the level of investment, income, and production. However, recession and depression bring negative changes to the organization in terms of a decrease in the level of investment, revenue, and production. In the context of BoP; in case of recession or depression, production within boundaries may not be able to accomplish the demand in the domestic market, which eventually leads to the BoP Deficit, due to higher imports. On the other hand, if there is a boom or recovery there is a demand for goods in the foreign market, which increase the export and ultimately leads to a BoP Surplus.

(iv) Change in the Cost Structure of the Business Partner: Cost of production plays an important role in deciding whether the country will export its goods and services or not. The company can reduce its cost with the help of the latest technology available in the market. Due to the latest technology, production cost fall, and then the price of the goods and services fall, which leads to a rise in the exports, which results in a BoP Surplus. On the other hand, the domestic cost of production rise, and the price of the goods and services rise, which leads to an increase in the imports which results in a BoP Deficit.

(ii) Political Instability: It is a situation in which there is an imbalance in the structure of the government. There is a chance of government collapse in a short time. This instability may lead to an increase in the payments, and it will reduce the capital receipts, thus it will initiate a BoP Deficit. However, if the economy is stable, then receipts are more than payments causing a BoP Surplus.

(i) Demonstration Effect: It is human nature, that a person is attracted to the things that he/she does not have. Generally, humans observe the action and behaviour of others and try to imitate them. In economics, the demonstration effect means the habit of the individual to consume the things consumed by others. In case Indians want to imitate western culture, then there will be a rise in the imports, which will result in an adverse level of BoP for the country. But if Indians prefer domestically produced goods over foreign goods then there will be a BoP Surplus.

(ii) Cross-border Bias: In case of bias, there will be cheaper exports and expensive imports, which will cause a BoP Deficit.

There are some effects of the BoP deficit on the country:

Thus, it arises a need to correct it. The BoP Deficit can be corrected through export promotion, reducing inflation, devaluation of the currency, and promoting import substitution, and vice-versa in the case of the BoP Surplus.

The transaction made in the Balance of Payments can be categorized into two parts: Autonomous Transactions and Accommodating Transactions.

These are economic transactions that are made to earn profits, not to bridge the gap in the BoP. In simple words, sometimes there are situations when there is a BoP deficit in that case the government has to make certain transactions to correct it, but the autonomous transactions are not made for that purpose. The purpose here is to maximize profits.

The main autonomous items are as follows:

These are economic transactions that are made to bridge the gap in the BoP. In simple words, sometimes there are situations when there is a BoP deficit in that case the government has to make certain transactions to correct the BoP, these transactions are called accommodating transactions. Thus, it is undertaken to establish the balance of payments identity.

The main accommodating items are as follows:

Difference between Autonomous and Accommodating Items

While preparing the Balance of the Payment account, it must be ensured that the BoP balances, i.e., all the credit items are equal to the debit items. But when international transactions are not recorded accurately, there arise some errors and omissions in BoP. For example, there is an error in converting the price of one currency into another currency, i.e., conversion of dollars into rupees. The error may arise due to compiling or collecting the data from different sources. Thus, there is a need to understand these errors and the reasons for these errors and omissions.

The double entry system followed in the BoP ensures that debit is equal to credit items. But, sometimes, the record of all the international transactions can not be made accurately. In that case along with current and capital accounts, there arises a third element in the Balance of payment account which is Errors and Omissions.

“Errors and omissions reflect the imbalances resulting from imperfections in source data and compilation of the Balance of Payments Accounts.”

These errors occur due to inaccurate or unreported data in the BoP, which may include:

Therefore, the items must be recorded carefully to reduce the errors and omissions in the Balance of the Payment Account.