Balance of Payment and its Components: Capital and Current Account

Usually, government records all the transactions that arise between a country and the outside world. This record is titled Balance of Payments. Balance of Payments can also be known as the Balance of International Payments. It is a statement of all transactions between entities in one country and the outside world over a specified time period, such as a quarter or a year. It lists all interactions between residents of one country and residents of other countries that involve businesses, organizations, or governments. Balance of Payments includes all the economic transactions, which involve the transfer of holding or title of goods, and services. Economic transactions include the activity that has a monetary effect, and also involves a transfer of the title or ownership of money, assets, goods, and services. These transactions can be made between individuals, firms, and the country’s government within a country and individuals, firms, and governments outside the country.

Now the question arises who is considered a Resident?

Residents of one country comprise individuals, business concerns, and several government organizations. Government agencies include several departments, like the Department of Agriculture, Defense, Education, and Commerce. However, resident of a country does not include tourists, workers that travel from one place to another (known as migratory workers), diplomatic staff, and foreign military personnel even if they reside in and work within the domestic boundary of a nation.

1. Visible: These include the export and import of all types of tangible goods. These are called ‘visible’, as they can be touched, seen, felt, and measured. The movement of visible items is open and is verifiable through customs officials.

2. Invisible: These include the export and import of services, like software services, insurance, shipping, banking, etc.  These are called ‘invisible’, as they cannot be touched, seen, felt, or measured.

3. Capital Transfers: These include capital receipts and capital payments. Receipts that increase financial liabilities or decrease financial assets are known as capital receipts. For example, the sale of assets or borrowing. In both cases, there is an inflow of cash. Capital Payments comprise an outflow of cash. For example, the purchase of assets or repayment of the loan.

4. Unilateral Transfers: These are one-sided transactions that include the transfer of goods and services without any claims for repayment. For example, a child studying abroad sends gifts to her parents. It also considers grants and donations that one government sends to other foreign governments.

Characteristics of Balance of Payments

1. It is the aggregation of all the transactions whether it is visible or invisible.

2. It is prepared for a specific period, generally annually.

3. BoP is a comprehensive statement that encompasses visible, invisible, and capital transfers.

Structure of Balance of Payments

BoP follows the Double Entry System to record transactions with the rest of the world. Thus, BoP account has two sides:

BoP is a self-balancing account like Trial Balance as it also follows the Double Entry System. But in reality, there are cases when it is not equal. Thus, BoP can be:

BoP can be classified as: 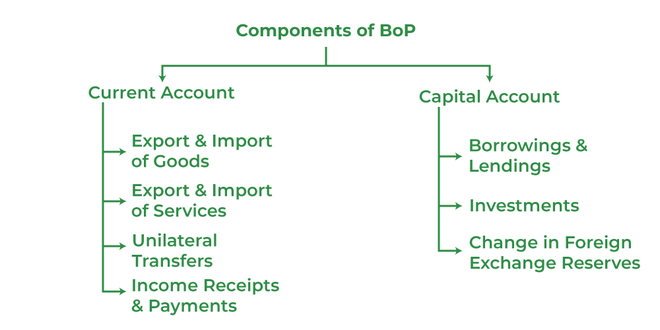 Current Account refers to the account, which records all the transactions that relate to the actual receipts and payments of the visible items, invisible items, and unilateral transfers during a specific period of time. It is a statement that records the trade of goods & services and current transfers during a specific period. In simple words, the current account focuses on the transactions related to tangible items(goods), intangible items( services), and one-sided transfers(gifts and grants).

It can be further categorized into:

1. Export and Import of Goods (Visible Trade or Merchandise Transactions)

It is also known as Invisible Trade because the services being intangible can not be spotted moving across the border. For example, insurance and banking. The balance of the invisible items (exports – imports) is known as the Balance of Invisible Trade. The payments of services are recorded on the debit side and receipts on the credit side of the Balance of Payment Account. Services can be categorized into three parts; viz., Banking, Insurance, and Shipping.

3. Unilateral or Unrequited Transfers to and from abroad (One-sided Transactions)

These transfers occur between a resident and a non-resident in the form of gifts, grants, and donations. It also includes official transfers, like grants in cash and donations. These are one-sided transactions and are commonly named transfers for free. These are payments and receipts that occur without receiving any in-kind services. It is generally considered as a part of ‘invisible’ in the BoP account. The receipt of unilateral transfers from the rest of the world is recorded on the credit side and payments on the debit side of BoP.

4. Income receipts and payments to and from abroad

It involves investment income in the form of rent, profits, and interest. 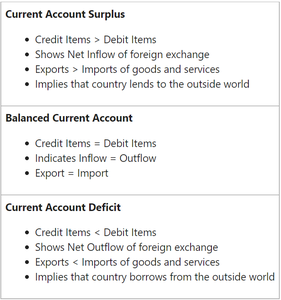 It comprises all the transactions, which has a direct or indirect impact on the assets and liabilities of the country or government with regard to the outside world. Under this, transactions like loans and investments are recorded among a country and the outside world. Thus, it can be concluded that capital accounts cause potential claims. Sometimes, there is confusion regarding whether the export and import of capital goods are to be included in the Capital account or not. But the answer to this question is ‘No’. It is so because the export and import of goods (whether capital or consumer) are included in the current account. Thus, it is irrelevant in the case of the capital account. In simple terms, a capital account includes those transactions, which cause a change in the assets or liabilities of a country’s residents or its government.

1. Borrowings and Lendings to and from abroad

2. Investments to and from abroad

The second component of the Capital Account consists of all the investments by the rest of the world in shares of Indian companies, real estate, etc. These transactions from the rest of the world are recorded on the credit side of BoP, as these transactions bring foreign exchange to the country. Besides, it also includes all the investments made by Indian residents in shares of foreign companies, real estate abroad, etc. These transactions are recorded on the debit side of the BoP, as they result in the outflow of foreign exchange.

There are two types of investments to and from abroad: 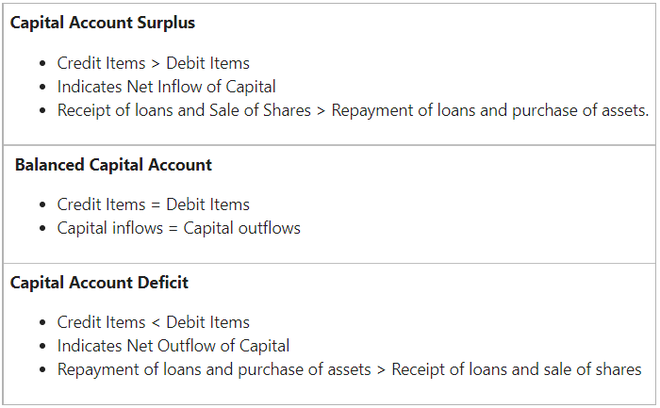 Besides Current Account and Capital Account, there is one more element in Balance of Payment, ‘Errors and Omissions’. It is the balancing item of BoP reflecting the inability to record all the international transactions accurately.