Automation in IT can be defined as a set of programs/steps which can be performed independently to achieve required functions and leads to the reduction of manual effort and improvement in code quality. Automating the repetitive procedures can provide real value to the projects which are getting executed using Agile methodology.

Automation is a vital component of maintaining agility, and it is a top priority for the entire team, as seen by defined practices/disciplines and a commitment to continuous improvement. Automation is used in a variety of ways, including continuous integration/builds, unit, functional, and integration testing, and continuous/automated deployment.

By reducing manual effort, automation in software design and testing eliminates risks associated with human error. It spares developers and testers from repetitive activities and allows them to focus on the more critical aspects of system quality, thus improving build and testing effectiveness as well as operational efficiency. Build and testing automation also ensures reusability and scalability, which in turn translates into significant cost savings.

Some of the areas where automation can play an important role are:

After the process has been identified, the Team is recommended to investigate how to automate the process and identify the tools that could assist with automation. Also, the Team needs to estimate the level of effort required to implement the automation against the total cost and risk of manual procedures. In most cases, the decision boils down to cost versus benefit analysis. This module covers overall concepts of Automation and the areas where Automation can be implemented along with the associated tools in an Agile project.

One of the key principles and benefits of following Agile methodology is faster feedback. This feedback includes feedback from the Clients, Product Owner, and Delivery team members. Often the term “Fail Fast” is used to emphasize that it is better to fail earlier so that impediments can be corrected based on the feedback.

Agile projects usually will have shorter release cycles in order to get early feedback from clients. Though the functionality delivered is less, it is more important to deliver the right functionality. From the delivery view, it is important that the team (developers and testers) should be able to deliver faster. It is imperative that any repetitive manual tasks should be automated. This will free up the time spent by team members on these repetitive tasks and focus on delivering more value (might be another story) to the users.

The complexity of a typical enterprise application development and deployment process involving multiple branches and multiple projects adds a huge cost overhead and risks to the organization.

Some of the benefits of using automation in these cases are listed below:

Usage of Automation in Agile:

This can be achieved effectively through automation. For further details on CI practice, please refer to the study material on ‘Continuous Integration and Associated Tools’ of this course.

To aid in this practice following support systems are required:

Continuous Deployment (CD): A mature Agile team extends the Continuous Integration practice so that the application can also be automatically and regularly deployed into multiple environments (realistically lower environments like DEV and QA). This is required to maintain “Production Deployable” builds. Any deployment issues will also be validated, as part of this process. This is known as Continuous Deployment.

For automating the deployments, the delivery team can have a custom script or use an automation framework like uDeploy. The CI build servers like Jenkins/Hudson can be configured to perform the CD activities as well.

With the nature of the Agile methodology, the software that is developed iteratively will be subject to testing multiple times either as part of the system integration testing or regression testing. So it is imperative to automate test execution as much as possible. There are various testing automation frameworks that are available like Cucumber, FitNesse, QTP, etc. that help in writing and executing the test cases. It is recommended to create the automated test cases right from the beginning of Sprint execution in parallel with the User story development.

Once the test cases are automated, they can be scheduled as part of the build servers to be triggered automatically. This will ensure that the tests are run often and the failures are reported as early as possible. Following are the various stages that can be automated: 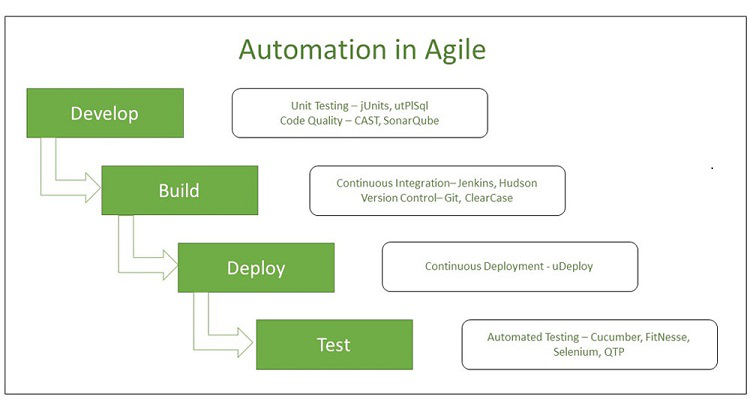 Today, automation is an exciting focus area for technology organizations and a lot of technologies and tools are emerging in it.

There are many obstacles to implementing automation in Agile projects. These are: