The module is a collection of packages designed for reuse, and Module JAR is a regular JAR with a module descriptor in its root folder. An Automatic Module is a JAR from the classpath that has been put in the module path. Their name is derived from the jar file name by default.

Hence there are enormous numbers of pre-existing libraries that you can use in your applications. Many of these are not yet modularized, but to facilitate migration, you can add any library’s JAR file to an app’s module path then use the packages in that JAR. When you do so, the JAR file implicitly becomes an automatic module and specifies the module declaration requires a directive.

Naming of the Automatic Modules

When the automatic module requires resources, such as audios, images, videos, and more, that resources should be packaged with the module to ensure that they’re available when the module’s types are used at execution time.

By convention, resources typically are placed in a folder named res under the module root directory along with the module-info.java file, and this is known as resource encapsulation (shown below). 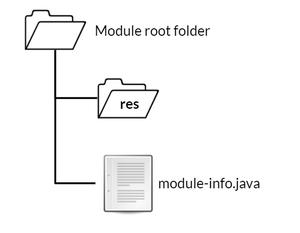 
The above example has a class named Calculate, which has a function (sum) to return the addition of two digits.


The above code has a main class and uses the function sum of Calculate class by importing them.

The above module declaration requires the dependency jar module (automatic) by its name, which will transform from “easy-math.jar” to “easy.math”

Output: Below is desired output of the above code by using the automatic module

The Automatic module was introduced to make compiling and initiating applications more smoothly and reliable and to find bugs or errors sooner than was possible with the classpath. To keep them smoothly, there is no way for a module declaration to require anything other than a named module, which excludes everything loaded from the classpath. If the story ended here, a module JAR only relies on other modules JAR, which would penetrate the environment to modularize from the bottom up.