Example 1: The following implementation demonstrates how to create and use an ArrayList with mention it’s size.

Example 2: The following implementation demonstrates how to create and use an ArrayList without the size mentioned.

Output is the same as Example 1. Since ArrayList is a dynamic array and we do not have to specify the size while creating it, the size of the array automatically increases when we dynamically add and remove items. Though the actual library implementation may be more complex, the following is a very basic idea explaining the working of the array when the array becomes full and if we try to add an item:

Let’s understand the Java ArrayList in depth. Look at the below image: 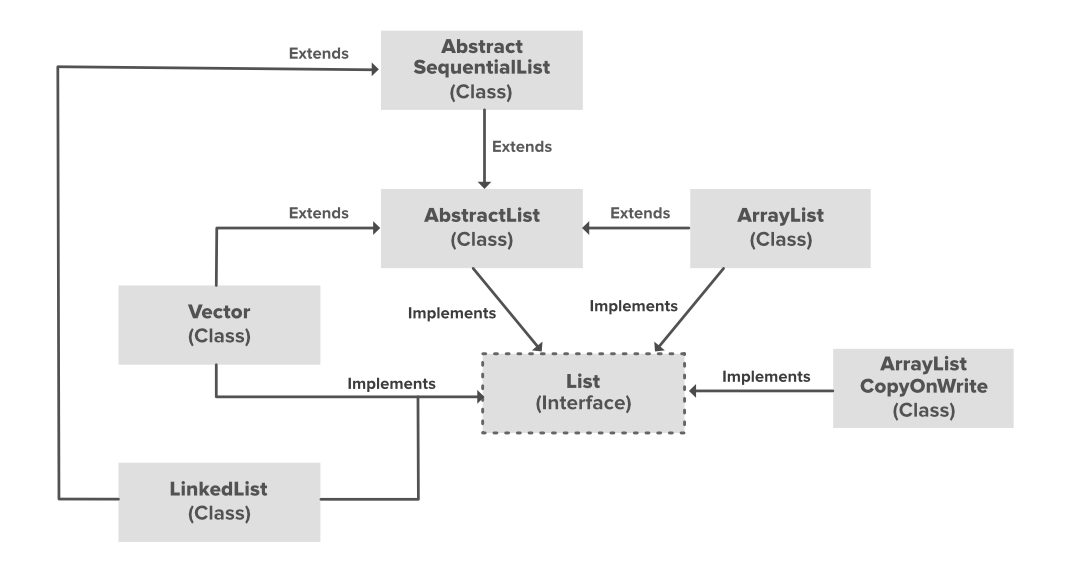 In the above illustration, AbstractList, CopyOnWriteArrayList, and AbstractSequentialList are the classes that implement the list interface. A separate functionality is implemented in each of the mentioned classes. They are:

Constructors in the ArrayList

1. ArrayList(): This constructor is used to build an empty array list. If we wish to create an empty ArrayList with the name arr, then, it can be created as:

3. ArrayList(int capacity): This constructor is used to build an array list with initial capacity being specified. Suppose we wish to create an ArrayList with the initial size being N, then, it can be created as:

Note: You can also create a generic ArrayList:

Some Key Point of ArrayList :

Let’s see how to perform some basic operations on the ArrayList as listed which we are going to discuss further alongside implementing every operation.

In order to add an element to an ArrayList, we can use the add() method. This method is overloaded to perform multiple operations based on different parameters. They are as follows:

In order to remove an element from an ArrayList, we can use the remove() method. This method is overloaded to perform multiple operations based on different parameters. They are as follows:

There are multiple ways to iterate through the ArrayList. The most famous ways are by using the basic for loop in combination with a get() method to get the element at a specific index and the advanced for loop.

Must Read: Array vs ArrayList in Java