Essentially, the Apriori algorithm takes each part of a larger data set and contrasts it with other sets in some ordered way. The resulting scores are used to generate sets that are classed as frequent appearances in a larger database for aggregated data collection. In a practical sense, one can get a better idea of the algorithm by looking at applications such as a Market Basket Tool that helps with figuring out which items are purchased together in a market basket, or a financial analysis tool that helps to show how various stocks trend together. The Apriori algorithm may be used in conjunction with other algorithms to effectively sort and contrast data to show a much better picture of how complex systems reflect patterns and trends.

RStudio provides popular open source and enterprise-ready professional software for the R statistical computing environment. R is a language that is developed to support statistical calculations and graphical computing/ visualizations. It has an in-built library function called arules which implements the Apriori algorithm for Market Basket Analysis and computes the strong rules through Association Rule Mining, once we specify the minimum support and minimum confidence, according to our needs. Given below are the required code and corresponding output for the Apriori algorithm. The Groceries dataset has been used for the same, which is available in the default database of R. It contains 9,835 transactions/ records, each having ‘n’ number of items that were bought together from the grocery store.

‘RColorBrewer‘ is a ColorBrewer Palette which provides color schemes for maps and other graphics.

‘Groceries‘ dataset is predefined in the R package. It is a set of  9835 records/ transactions, each having ‘n’ number of items, which were bought together from the grocery store.

inspect() function prints the internal representation of an R object or the result of an expression. Here, it displays the first 10 strong association rules.

The complete R code is given below. 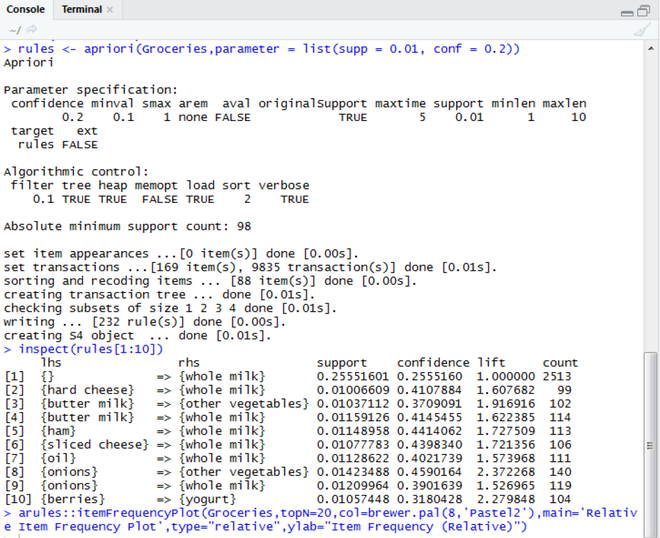 Strong Rules obtained after applying the Apriori Algorithm is as follows

After running the above code for the Apriori algorithm, we can see the following output, specifying the first 10 strongest Association rules, based on the support (minimum support of 0.01), confidence (minimum confidence of 0.2), and lift, along with mentioning the count of times the products occur together in the transactions. 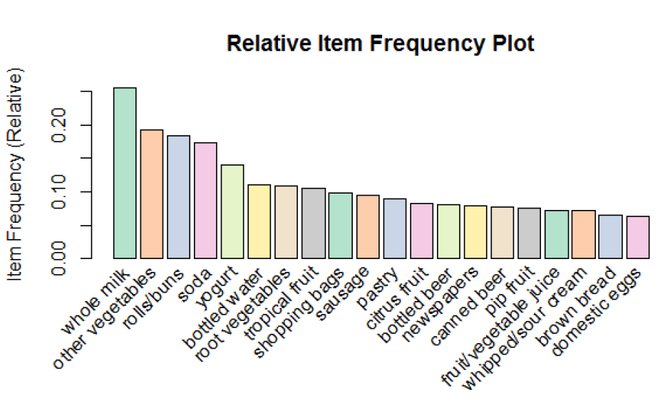 We have used the ‘Groceries’ dataset which has about 9835 transactions that include ‘n’ number of items that were bought together from the store. On running the Apriori algorithm over the dataset with a minimum support value of 0.01 and minimum confidence of 0.2, we have filtered out the strong association rules in the transaction. We have listed the first 10 transactions above, along with the box plot of the top 20 items having the highest relative item frequency. Some association rules that we can conclude from this program are:

Hence, it will be profitable to put ‘whole milk’ in a visible and reachable shelf as it is one of the most frequently bought items. Also, near the shelf where ‘buttermilk’ is put, there should be shelves for ‘whole milk’ and ‘other vegetables’ as their confidence value is quite high. So there is a higher probability of buying them along with buttermilk. Thus, with similar actions, we can aim at increasing the sales and profits of the grocery store by analyzing users’ shopping patterns.