Applications, Advantages and Disadvantages of Tree

Tree is a non-linear data structure. It consists of nodes and edges. A tree represents data in a hierarchical organization. It is a special type of connected graph without any cycle or circuit. 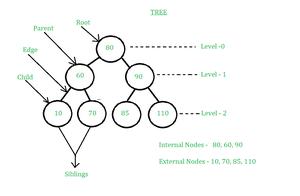 My Personal Notes arrow_drop_up
Previous
Applications, Advantages and Disadvantages of Red-Black Tree
Next
Maximum Path sum in a N-ary Tree
Recommended Articles
Page :
Applications, Advantages and Disadvantages of Red-Black Tree
16, May 22
Applications, Advantages and Disadvantages of Binary Tree
25, May 22
Applications of Minimum Spanning Tree Problem
04, Mar 11
Applications of tree data structure
07, Feb 11
Complexity of different operations in Binary tree, Binary Search Tree and AVL tree
19, Jan 18
Maximum sub-tree sum in a Binary Tree such that the sub-tree is also a BST
20, Mar 19
Convert a Generic Tree(N-array Tree) to Binary Tree
29, Oct 20
What is Data Structure: Types, Classifications and Applications
20, May 22
Advantages of Trie Data Structure
06, Jan 18
Check if the given binary tree has a sub-tree with equal no of 1's and 0's | Set 2
15, Mar 19
Difference between General tree and Binary tree
10, Oct 19
Tree of Space - Locking and Unlocking N-Ary Tree
03, Aug 21
Check if given inorder and preorder traversals are valid for any Binary Tree without building the tree
03, Sep 21
Comparison between Height Balanced Tree and Weight Balanced Tree
27, Dec 21
Difference between Binary tree and B-tree
20, Dec 19
Convert a given Binary tree to a tree that holds Logical AND property
06, Jun 17
Difference between B tree and B+ tree
11, Jun 20
Difference between Binary Tree and Binary Search Tree
31, Oct 19
Construct Full Binary Tree using its Preorder traversal and Preorder traversal of its mirror tree
03, Oct 17
Create a mirror tree from the given binary tree
18, Mar 19
Count the nodes of the tree which make a pangram when concatenated with the sub-tree nodes
28, May 19
Convert a given Binary tree to a tree that holds Logical OR property
25, Sep 19
Construct XOR tree by Given leaf nodes of Perfect Binary Tree
13, Jan 20
Min-Max Product Tree of a given Binary Tree
11, Jun 20
Article Contributed By :