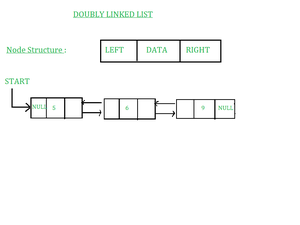 It is different from the normal linked list by allowing the bidirectional traversal which in turn reduces the time complexity of any operation.

Insertion:
Insertion into a doubly-linked list has three cases that are as follows:

Deletion:
Deletion into a doubly-linked list has three cases that are as follows: