Angular is a client-side TypeScript-based, front-end web framework developed by the Angular Team at Google, that is mainly used to develop scalable single-page web applications(SPAs) for mobile & desktop. Angular is a great, reusable UI (User Interface) library for developers that helps in building attractive, steady, and utilitarian web pages and web applications. It is a continuously growing and expanding framework which provides better ways for developing web applications. It changes the static HTML to dynamic HTML. Its features like dynamic binding and dependency injection eliminate the need for code that we have to write otherwise. TypeScript is a Strict Super Set of JavaScript, which means anything that is implemented in JavaScript can be implemented using TypeScript. 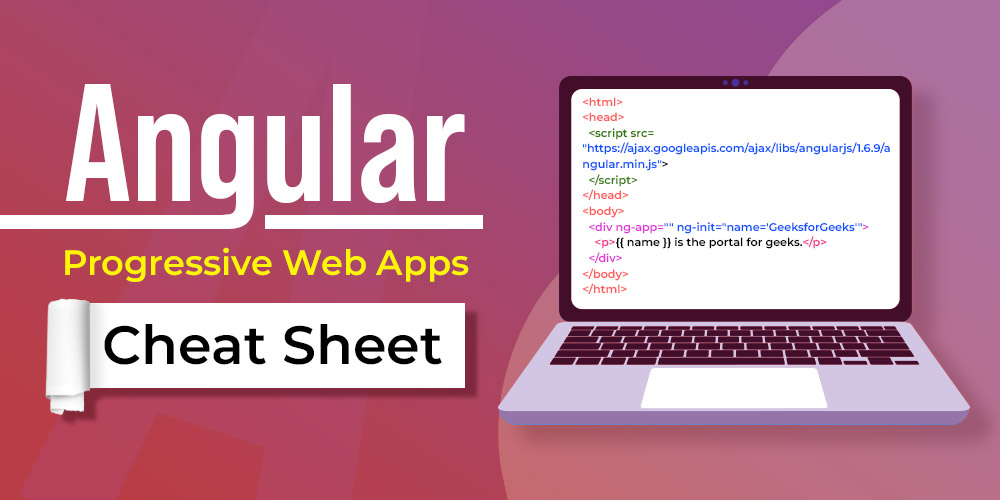 What is Angular Cheat Sheet?

The Angular Cheat Sheet will give quick ideas related to the topics like Basics, Lifecycle Hooks, Components & Modules, Directives, Decorators, Angular Forms, Pipes, Services, Routing & many more, which will provide you a gist of Angular with their basic implementation. The purpose of the Cheat Sheet is to provide you with the content at a glance with some quick accurate ready-to-use code snippets that will help you to build a fully-functional web application.

Angular is a component-based application design framework, build on Typescript, for creating a sophisticated & a scalable single-page web application that has a well-integrated collection of libraries that helps to develop the code in module-wise with an easy-to-update, debug module. In order to work with Angular, we must have node.js, Node Package Manager(NPM) & Angular CLI installed in the system. Please refer to the Installation of Node.js on Windows/Linux/Mac article for the detailed installation procedure.

After successful installation of the node.js & npm, we need to install the Angular CLI, which is described below:

Open the terminal/Command prompt & type the below command:

For checking the version of the node.js & angular CLI installed, type the below command in the cmd:

You may navigate to any of the directories where you want to create the project.

Run the application: Navigate the folder where the project has been created & type the below command to run the app:

The ng serve command will launch the server & will open your browser to http://localhost:4200/.

Component Creation: The Angular application is composed of a different set of components, where every component has different roles & functionality that is designed to perform the specific task. The Components can be created with the following command:

Please refer to the Components in Angular 8 article for further detailed descriptions.

Lifecycle Hooks of Component: Every Component has its own lifecycle, which will be started when Angular instantiates the particular Component class that renders the Component view along with the child view. It is basically timed methods that differ when and why they execute. These methods will be triggered with the change detection, i.e., depending upon the conditions, the corresponding cycle will be executed. Angular will constantly check when the data-bound properties changes & accordingly update both the view & the Component instances, as required. The order of the execution for these lifecycle hooks is important. The Component instance will be destroyed & will be removed its rendered templates from the DOM by Angular when the lifecycle ends. The different lifecycle hook methods for the Component are described below:

Modules: Every Angular application contains the root module, called NgModules, which acts as the container for the cohesive block of code, that is specifically designed to that application domain, a workflow, or a closely related set of capabilities. It consists of the components, services, & other code files, whose scope is decided by the NgModules. The NgModules in the AppModule, reside in the app.module.ts file. The  @NgModule() class decorator is used to define the NgModule. It is a function that accepts one metadata object, whose properties describe the module. Some of the important properties are described below:

Angular Template The Template is a blueprint of the Angular application for developing the enhanced user interface, written in HTML & special syntax can be used within a template. Basically, each Template represents the section of the code on an HTML page that will be rendered in the browser with a lot more functionality. While generating the application through the Angular CLI, the app.component.html will be the default template that will contain the HTML code. The Template Syntax helps to control the UX/UI by coordinating the data between the class and the template. Angular provides several template syntax, which is described below:

We will learn about the various concepts of Binding & Pipes in more detail, in the underneath section.

Directives: The Directive is generally a built-in class that includes the additional behavior to elements in the Angular Applications. There are 2 types of directives:

Decorators: The Decorators are the function that is called with the prefix @ symbol, immediately followed by the class, methods, or property. The Service, filter, or directive are allowed to be modified by the Decorators before they are utilized. It facilitates the metadata for configuration that decides how the components, function or class are to be processed, instantiated & utilized during the runtime. All the Decorators can be categorized in 2 ways & each type of Decorator contains its own subset of the decorators, which are described below:

Example 2: This example describes the basic implementation of the Directives & the Decorators in Angular.

Data Binding is a technique to automatically synchronize the data between the model and view components. Angular implements data-binding that treats the model as the single source of truth in your application & for all the time, the view is a projection of the model. Unlike React, Angular supports two-way binding. In this way, we can make the code more loosely coupled. Angular broadly categorizes the data flow sequence in 2 ways:

Depending upon the direction of data flow, Angular provides the following concepts that help to bind the data flow either from source to view, view to source, or two-way sequence of view to the source to view, which are described below:

The different binding types with their category, are described below:

Except for the Text interpolation, the Binding has the target name that is declared on the left-hand side of the equal sign, where the target can be property or the event, that is surrounded by a square bracket ([ ]) characters, parenthesis (( )) characters, or both ([( )]) characters. The prefix of the binding punctuation of [], (), [()] specifies the direction of data flow, i.e.,

The expression or statement declared on the right-hand side of the equal sign, is represented within double quote (“”) characters.

Example 3: This example describes the basic implementation of the Data Binding In Angular.

The Angular Form is an integral part of any web application, which may contain the collection of controls for an input field, buttons, checkboxes, etc, along with having the validation check that enables to validate data entered by the user in an appropriate form. There are 2 different approaches that are facilitated by Angular, to handle the user input through the forms, i.e.,  the reactive form & the template-driven form.

Example 4: This example describes the basic implementation of the Angular Forms.

Pipes in Angular can be used to transform the strings, currency amounts, dates, and other data, without affecting the actual content. This is a simple function that can be used with the interpolation(template expression), in order to accept the input value & return the transformed data. In order to use the Pipe, add the pipe ( | ) symbol with the expression inside the template expression. Each Pipe can be declared only once & can be used throughout the application. Angular facilitates 2 kinds of Pipes, i.e., built-in pipes & custom pipes.

The Custom Pipes can further be defined by specifying as the pure & impure pipes, which are described below:

Please refer to the Explain pure and impure pipe in Angular article for further details.

Example 5: This example describes the basic implementation of the Angular Pipes.

The Service facilitates the services to various components, in order to complete a certain task or to perform the specific operation that needs to be accomplished by the application. In simple words, Service is a class having a narrow, well-defined purpose. In order to increase the modularity and reusability, Angular help us to distinguish the Component from the Services. The purpose of using the service is to organize & share the main application logic, data or functions, and models, in order to accomplish the requirement-specific task for the different components of Angular applications. For this, we usually implement it through Dependency Injection.

Dependency Injection: Dependency Injection is part of Angular Framework, which is a coding pattern, where the dependencies are received by the class, from external sources, instead of creating them itself. It allows the classes along with the Angular Decorators, like, Components, Directives, Pipes, and Injectables, that help to configure the dependencies, as required. Angular facilitates the ability to inject the service into the Components, in order to provide access to that component to the service.

The Injectable() decorator describes the class as a service, which allows Angular to inject it into the Component as a dependency. The injector is the main technique, where it is used to create the dependencies & maintain the container of dependency instances, which will be reutilized when required. A provider is an object which notifies the injectors about the process to create or obtain the dependency.

Creating a Service: The Service can be created by using the below syntax:

Please refer to the Explain the steps for creating a services in Angular 2 article for the detailed description.

Example 6: This example describes the basic implementation of the Services & Dependency Injection in Angular.

The Router helps to navigate between pages that are being triggered by the user’s actions. The navigation happens when the user clicks on the link or enters the URL from the browser address bar. The link can contain the reference to the router on which the user will be redirected. We can also pass other parameters with a link through angular routing. For this, it helps to create a single-page application with multiple views and allows navigation between them. The routes are the JSON array where each object in the array defined the route. Angular allows for creating nested routing, which means sub-navigation or sub-page navigation between the available components.

Creation of Routing Modules: Routing can only be possible to create if we have at least 2 components. The following command can be used to create the routing:

Router-Outlet: The Router-outlet component basically renders any component that the router module returns, i.e. it tells the router where to display the routed views. The below syntax is used to add the router component:

The routerLink directive takes a path & navigates the user to the corresponding component. In other words, it is similar to href in HTML, which takes the path & compared it to all the paths defined in the routing module & the component that matches will be displayed in the router outlet.

The wildcard routes help to restrict the users to navigate to a part of the application that does not exist, i.e. when none of the path matches then the wildcard route will be used & it should always be the last route in the routes array. The router helps to select the route any time the requested URL doesn’t match any router paths. We can set up the wildcard route with the following command:

Here, the 2 asterisks (**) indicate this route’s definition is a wildcard route.

The Router CanDeactivate interface that a class can implement to be a guard deciding if a route can be deactivated. The navigation only continues, if all guards return true, otherwise the navigation will be canceled.

Example 7: This example describes the basic implementation of Routing in Angular.