The term biodiversity is used to describe a variety of biological forms. The term “biodiversity” is more frequently used to describe the range of living things that can be found in a given area. A geographic region’s diversity of living forms contributes to its stability. Based on the form and function of their bodies, all living things are recognized and grouped. Charles Darwin initially introduced the concept of evolution in his book The Origin of Species in 1859. 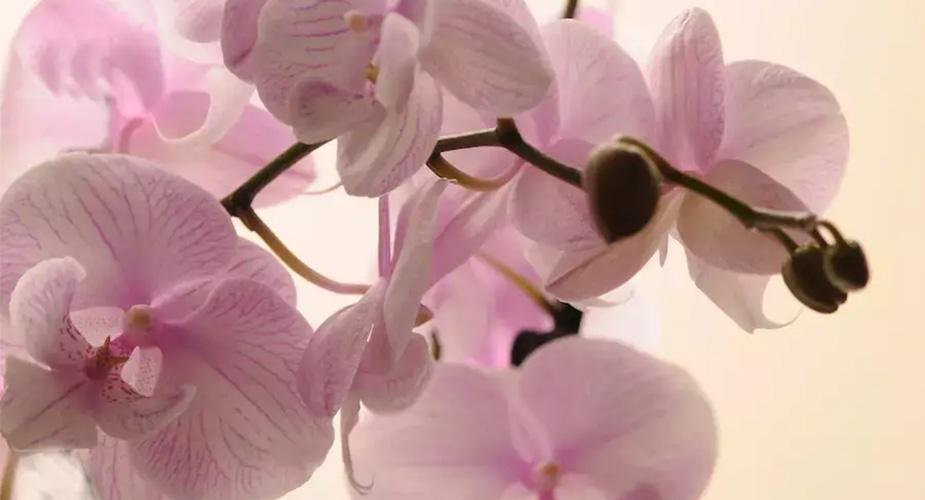 The term angiosperm is derived from two different words. They are Angio– means covered and Sperma – means seed.

The fruit-producing plants’ organs contain the developing seeds. As a result, they are known as flowering plants. There are certain structures in the plant embryos that are found in seeds. We refer to them as cotyledons or seed leaves. During the germination of the seed, these structures form and turn green. Monocotyledonous or monocot plants are those that have seeds with only one cotyledon. Dicots are plants that have seeds with two cotyledons.

The plants known as angiosperms have stems, roots, and leaves. A flower is where angiosperm seeds are found. Of all the plants on Earth, these make up the majority. Fruit is created by the developing seeds inside the plant’s organs. Thus, they are often referred to as flowering plants. The most developed and advantageous class of plants is the angiosperms. They can flourish in a variety of habitats as bushes, trees, herbs, and shrubs.

One of the biggest benefits of angiosperms is their ability to produce endosperm. After fertilization, the endosperm develops and provides sustenance for the growing seed and seedling.

Pollination is a process that angiosperms must go through in order to reproduce. Stamens, or male sex organs, are found in angiosperms. The anther is located at the stamen’s tip. Pollen is produced here. It is necessary to transport the pollen to the pistil, or the feminine portion of the flower. At the tip of the pistil, the stigma still has pollen on it. Pollen is transported to the ovary by the stigma through a tube known as the style.

Pollinators might include birds and insects. While moving from blossom to flower in search of nectar, insects and birds may pick up some pollen and also leave some behind. Pollen can be moved from one flower to another with the aid of the wind.

One cotyledon makes up each seed. Simple leaves with parallel veins are present. This group includes accidental roots. There are three people in each floral whorl. It has numerous, closed vascular bundles. Bananas, sugarcane, flowers, etc. are a few examples.

These plants produce seeds with two cotyledons. Instead of adventitious roots, they have tap roots. The venation on the leaves is reticulate. The vascular bundles are arranged in rings, and the flowers are either tetramerous or pentamerous. Grapes, sunflowers, tomatoes, etc. are examples. 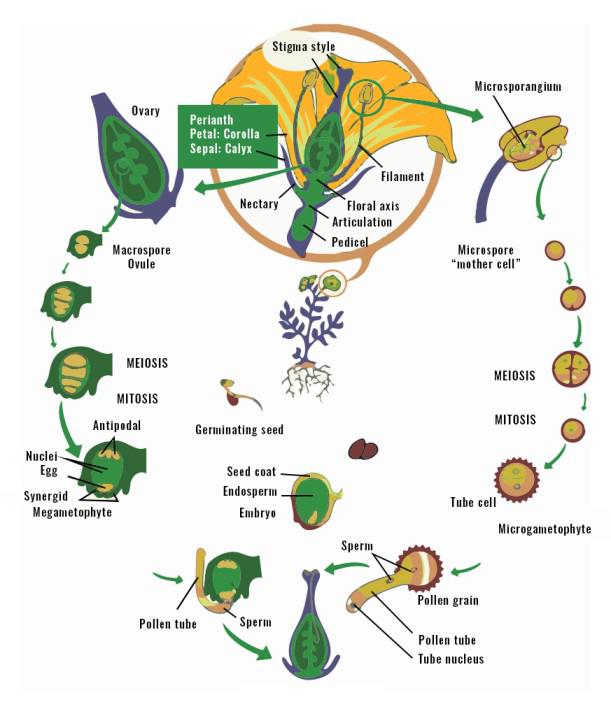 The alternation of generations is a technique used by angiosperms to develop and reproduce. They alternate between asexual and sexual phases. As spores are produced during the asexual phase, it is known as the sporophyte generation. The gametophyte generation, which occurs during the sexual phase, involves the manufacture of gametes. Within the plant bloom, gametes for both sexes develop. Pollen contains the male microspores, which mature into sperm. In the plant ovary, female megaspores transform into egg cells. Angiosperms are pollinated by insects, animals, and the wind. Fertilized eggs mature into seeds, and the fruit of the plant grows from the ovary around them. Angiosperms can be distinguished from other flowering plants known as gymnosperms by their fruit development. Woody and herbaceous plants are two different forms of angiosperms. Trees and certain shrubs are examples of woody plants. Beans and corn are examples of herbaceous plants. By alternating between asexual and sexual phases, angiosperms go through a life cycle.

Question 1: Which living beings are the most different types of life?

The prokaryotes are by a long shot the most bountiful living beings possessing planet Earth. They are additionally by a wide margin the most different, both metabolically and phylogenetically; they envelop the Bacteria and the Archaea, two out of the three significant divisions of living organic entities.

Question 2: What is the significance of angiosperms?

The angiosperms rule Earth’s surface and vegetation in additional conditions, especially earthbound territories, then some other gathering of plants. Thus, angiosperms are the main extreme wellspring of nourishment for birds and vertebrates, including people.

Question 3: What is the existing pattern of angiosperms?

The angiosperm life cycle comprises a sporophyte stage and a gametophyte stage. The cells of a sporophyte body have a full supplement of chromosomes (i.e., the cells are diploid, or 2n); the sporophyte is the regular plant body that we see when we check an angiosperm out.

Question 4: What are the two main categories of angiosperms?

The Dicots (Magnoliopsida) and the Monocots are the two primary groupings, or classes, into which flowering plants have historically been separated (Liliopsida).

Question 5: What kind of habitat do angiosperms have?

All of the planet’s terrestrial and aquatic ecosystems are home to angiosperms. Angiosperms predominate over all of the main terrestrial zones of vegetation, with the exception of conifer forests and moss-lichen tundras.