The need for new technologies and their developers is increasing as the world is dynamically transforming digitally. Everyone nowadays relies on apps for a variety of functions, including acquiring information and keeping in touch with one another as well as daily activities like shopping, commuting, and bill payment. But have you wondered how much Android Developers are getting paid to do all these things? PayScale estimates that the annual compensation for an Android Software Engineer in India is ₹3,99,594. Here’s why you need to be thorough with the Top 25 Advanced Android Interview Questions to ace interviews in both product and service-based companies.

Likewise, the average income for an experienced Android developer in India is ₹13,16,973/-.  When it comes to Android Developer Salaries in the United States and the United Kingdom, the figures are $113,900 and £35,554, respectively.

Many Android Developers are being hired by big giants like Google, Amazon, Facebook, and others as well as growing startups like Zomato, Paytm, and CRED. If you wish to be employed by one of these companies, go through these top 25 Advanced Android Interview Questions and their Answers to ace in interviews:

Q1. What are the Lifecycle Events of an Android Activity?

Lifecycle is an Android Architecture Component released by Google to assist all Android developers. The Lifecycle is a class/interface that maintains information about an activity/fragment’s current state and allows other objects to see this state by keeping track of it. The events of an Android component’s lifecycle, such as those of an activity or fragment, are the focus of the lifecycle component.

There are three major classes to deal with it:

A lifecycle is a method that provides information on the Events that took place in relation to an activity or fragment. We have a lifecycle class that uses the enumerations State and Event to track the various components. The lifecycle is determined by Events and States. Every event has a unique state.

Get to know more with an Example: Activity Lifecycle in Android with Demo App 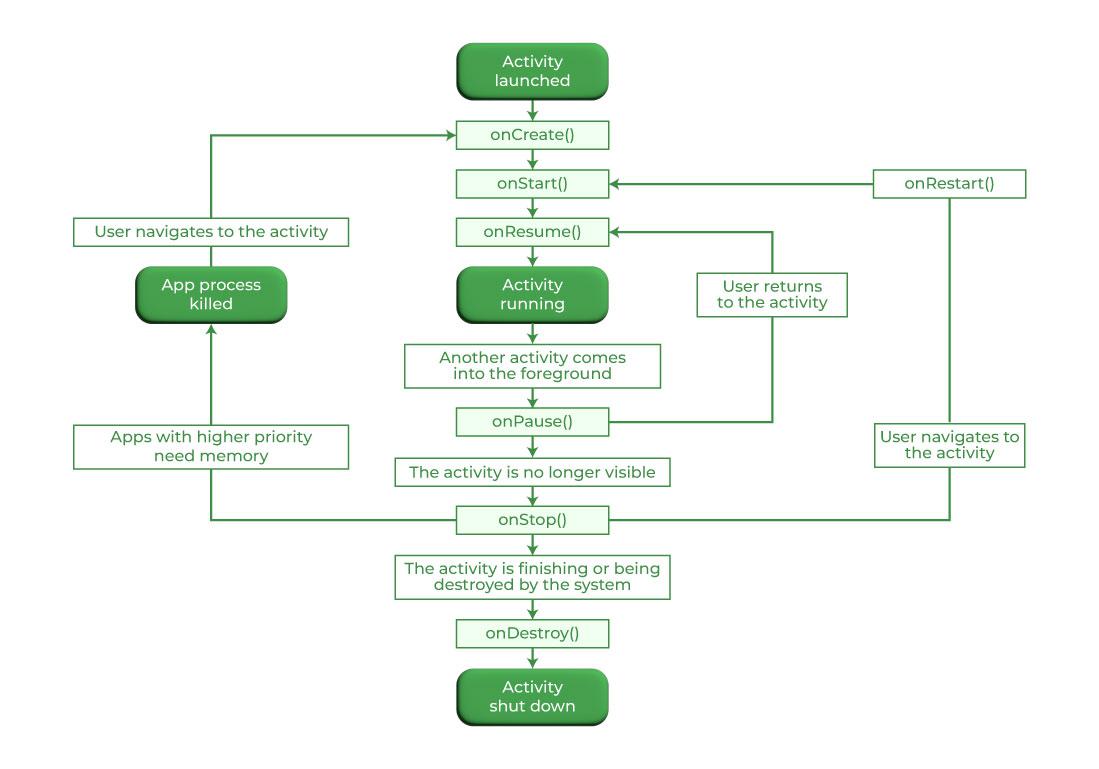 On Android, there are essentially two ways for apps to communicate with one another:

Q3. How would you communicate between Two Fragments?

To communicate across fragments, it is advised to make a shared ViewModel instance. Both fragments have access to the ViewModel via the Activity that contains them. If the data is exposed using LiveData, the other fragment will be pushed with the updated data as long as it is monitoring the LiveData from the ViewModel. The fragments can update data within the ViewModel.

Get to know more with an Example: How to Communicate Between Fragments in Android?

Q4. What is Android Data Binding?

A support library called the Data Binding Library allows you to take advantage of binding UI components to data sources in a layout using a declarative format.

Layouts are frequently defined in activities using code that invokes UI framework APIs. For instance, in the code below, the userName field of the viewModel variable is bound to a TextView widget by calling findViewById() to locate the widget:

The subsequent section illustrates how to assign text to the widget directly in the layout file using the Data Binding Library. By doing this, none of the Java/Kotlin code from the previous example is necessary.

Get to know more with an Example: Data Binding in Android with Example

Q5. What is a ViewHolder Pattern? Why should We use it?

When the adapter calls the getView() function, it also calls the findViewById() method. As a result of the mobile CPU having to perform such heavy lifting, the application’s performance suffers and battery life degrades. FindViewById shouldn’t be used repeatedly. Instead, utilize the ViewHolder design pattern.

The efficiency of the application improves because a ViewHolder stores a reference to the id of the view resource, eliminating the need to “find” it again later.

Q6. What is the difference between Handler, AsyncTask, and Thread?

Q7. Discuss Singletons vs Application Context for the app-global state.

Static singletons may usually perform the same purpose in a more scalable way. If your singleton requires a global context (for instance, to register broadcast receivers), you can provide a Context to the method that retrieves it, which internally uses Context. When creating the singleton for the first time, use getApplicationContext().

However, singletons are difficult to test and, if lazily initialized, introduce an indeterminism state with undetectable side effects. Another issue that has been raised is visibility, and since singletons imply global (= random) access to shared states, subtle flaws may appear when concurrent programs are improperly synchronized.

Despite being a singleton in and of itself, the app context is maintained by the framework and has a clearly defined life cycle, scope, and access path. Therefore, in my opinion, this is the only place where you should maintain an app-global state.

Q8. How can We use AsyncTask in different Activities?

One approach is to build a callback interface using AsynTask in several Activities.

Then in your MainActivity

And Add to your AsyncTask class:

Following are all of the Android architecture components:

Q10. What are some differences between Parcelable and Serializable?

We cannot just transfer objects to activities in Android. The objects must either implement the Serializable or Parcelable interface to accomplish this.

An established Java interface is serializable. Simply implement the Serializable interface and provide the override methods. This method’s drawback is that reflection is employed, and it takes time. Serializable is substantially slower than a Parcelable operation.

This is due, in part, to the fact that we explicitly state the serialization procedure rather than letting reflection infer it. Furthermore, it makes sense that the code has been highly optimized with this end in mind.

Q11. What is Broadcast Receiver?

Similar to the publish-subscribe design pattern, Android apps have the ability to transmit and receive broadcast messages from other Android apps and the Android system. The receiver component of an Android application is often referred to as the broadcast receiver. This component allows us to register receivers for any application- or system-level event. When that happens, the Android system will inform the registered receivers about the execution of the events in question.

Receivers can pick up one of two different kinds of broadcasts:

Get to know more with an Example: Broadcast Receiver in Android With Example

Model—View—ViewModel (MVVM) is the industry-recognized software Architecture Pattern that overcomes all drawbacks of MVP and MVC design patterns. MVVM suggests separating the data presentation logic(Views or UI) from the core business logic part of the application.

The separate code layers of MVVM are:

The description of Model is as follows:

Get to know more with an Example: How to Build a Simple Note Android App using MVVM and Room Database?

Q14. What is Android Jetpack?

Android Jetpack is a set of software components, libraries, tools, and guidance to help in developing robust Android applications. Launched by Google in 2018, Jetpack comprises existing android support libraries and android architecture components with an addition of the Android KTX library as a single modular entity. Jetpack consists of a wide collection of libraries that are built in a way to work together and make robust mobile applications.

Its software components have been divided into 4 categories:

Get to know more:

The new open-source project known as Android Extension Library, also called AndroidX, is a considerable improvement over the original Android Support Library and can be used to create, test, package, and deliver libraries within Jetpack. The AndroidX namespace includes the Android Jetpack libraries. AndroidX is created independently of the Android OS and provides backward compatibility with earlier Android releases, much like the Support Library. The Support Library is entirely replaced by AndroidX packages, which provide feature parity and new libraries.

Additionally, AndroidX has the following functionalities as well:

When a large number of objects have to be created that are dependent on a large number of other objects in a project, it becomes difficult as the project grows larger. With this increasing code base, good external support is required to keep track of everything. That is one of the scenarios in which we employ a Dependency Framework.

If we have two activities, Activity A and Activity B. Both require an object Downloader, which in turn requires the request. The request will now be dependent on Executor and HTTPClient. Dependency Injection is based on the concept of Inversion of Control, which states that a class’s dependencies should come from outside. In other words, no class should instantiate another class. Instead, instances should be obtained from a configuration class.

Dependency Framework is used for the following reasons:

Q17. What is Singleton Class in Android?

The Singleton Pattern is a software design pattern that restricts the instantiation of a class to just “one” instance. It is used in Android Applications when an item needs to be created just once and used across the board. The main reason for this is that repeatedly creating these objects, uses up system resources. The identical object should therefore only be created once and used repeatedly. It is utilized in situations where we only require a single instance of the class, such as with network services, databases, etc. We, therefore, create a singleton class to implement the Singleton pattern in our project or product. In this article, we’ll look at how to create singleton classes in Java and Kotlin.

Get to know more with an Example: Singleton Class in Android

Q18. What is Jetpack Compose in Android?

Jetpack Compose is a modern UI toolkit that is designed to simplify UI development in Android. It consists of a reactive programming model with conciseness and ease of Kotlin programming language. It is fully declarative so that you can describe your UI by calling some series of functions that will transform your data into a UI hierarchy. When the data changes or is updated then the framework automatically recalls these functions and updates the view for you.

Get to know more with an Example: Basics of Jetpack Compose in Android

Q19. What is Coroutine on Android?

Coroutines are lightweight threads that allow us to do synchronous and asynchronous programming with ease. We can build the main safety and replace callbacks with coroutines without blocking the main thread. The concurrency design pattern of the coroutine allows for code simplification and asynchronous execution, which can offer very high levels of concurrency with a very small overhead.

Get to know more with an Example: Coroutines in Android

Q20. What is Espresso in Android?

Google created the open-source Espresso testing framework for the Android user interface (UI). Espresso is an easy, efficient, and adaptable testing framework. Espresso tests avoid the distraction of boilerplate content, custom infrastructure, or complicated implementation details by stating expectations, interactions, and assertions in a straightforward and concise manner. Espresso tests execute really efficiently! It allows you to forego your waits, syncs, sleeps, and polls while manipulating and making assertions on the application UI while it is idle.

Get to know more with an Example: UI Testing with Espresso in Android Studio

Q21. Types of Notifications in Android.

Notifications could be of various formats and designs depending upon the developer. In General, one must have witnessed these four types of notifications:

Get to know more with an Example: Notifications in Android with Example

Q22. What is Firebase Cloud Messaging?

Q23. What is the Google Android SDK?

The Google Android SDK is a set of tools that developers use to create apps that run on Android-enabled devices. It includes a graphical interface that simulates an Android-driven portable environment, allowing them to test and debug their applications.

Q24. What is the difference between Volly and Retrofit?

Q25. Types of Databases in Android.

Relational, key-value, and object-oriented databases are the three main types of databases used by Android devices.